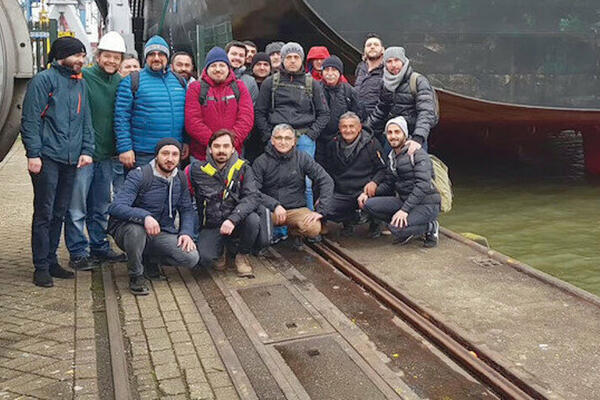 All 15 remaining crew members of the Liberian-flagged ship the Mozart were rescued on Feb. 12 after the cargo vessel had fallen victim to a pirate attack off Nigeria, two involved maritime companies announced.

Borealis Maritime and Boden Maritime stated that the entire crew was now safe in contact with their families, adding that they would return to Turkey as soon as possible.

“We thank the Turkish and Nigerian governments for their support during these challenging three weeks, all government agencies and officials, the entire Borealis community working on the land and at sea, and everyone who helped us solve this problem,” the statement said.

The statement also expressed the firms’ condolences for one crew member who lost his life during the attack, while commending three others who remained on board for their courage and discipline in bringing the ship back to a secure area.

Separately, Turkey’s foreign minister said the crew members were in good health and would be brought to Turkey from Nigeria’s capital Abuja by flag carrier Turkish Airlines.

Noting that after this incident, efforts had been launched to increase the intelligence precautions to prevent such incidents, Çavuşoğlu underlined that cooperation would be necessary to prevent these events in the future.

“Though we saved our citizens, Turkey will provide the necessary support to avoid these incidents.”

Also, Çavuşoğlu spoke by phone with the families of the crew members, according to diplomatic sources.

Six out of 15 rescued Turkish sailors were brought on Feb. 13 to the Nigerian capital Abuja under local security forces’ guard and reached the Turkish embassy in the city.

Upon their arrival at the embassy, the sailors talked to their families over the phone.

The family of Gökhan Burhan, one of the rescued sailors, rejoiced at the news.

“I’m very happy, thousands of thanks to God. I thank everyone for their help […] I’m speechless with delight,” she said.

Counting the hours to see his son, Burhan’s father said: “We received very good news. I hope God will bring my child to us soon.”

In a pirate attack on Jan. 23, 15 of Mozart’s 19 crew members were abducted, while one of them, an Azerbaijani national, was killed.

The vessel was managed by Borealis Maritime, a firm based in London and Hamburg, Germany

This article originally appeared in Hurriyet Daily News on 13 Feb 2021.