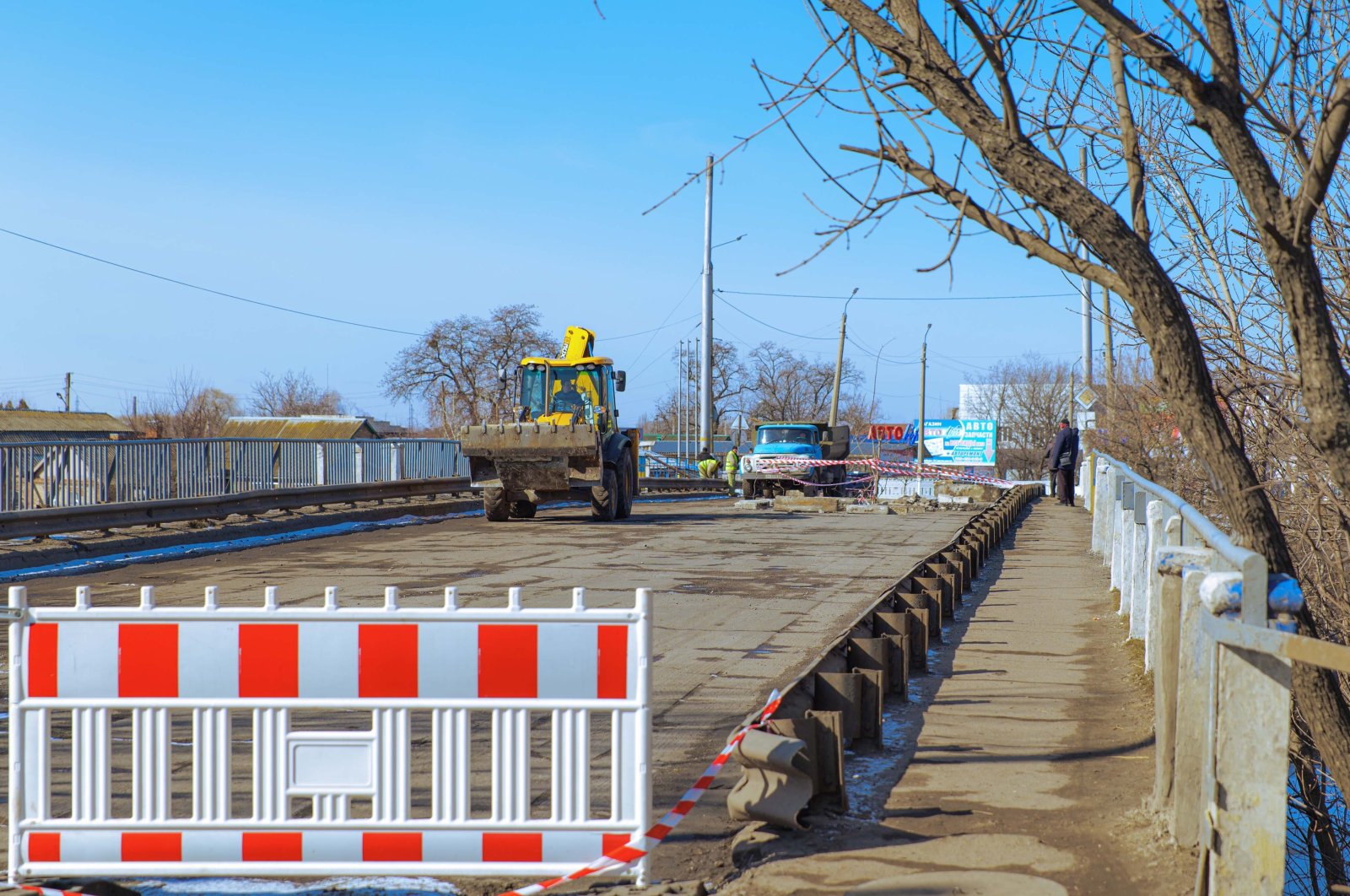 Renovation work is carried out on a bridge in Sloviansk, Ukraine, March 10, 2021. (Shutterstock Photo)

Kyiv invites Turkish firms to invest in $10B construction project

Turkey’s vast experience in carrying out collaborative projects between the public and private sector is what lead to Ukraine’s decision to invite Turkish investors to participate in the country’s $10 billion (TL 78.98 billion) “grand construction project,” Ukraine’s Ambassador to Turkey Andrii Sybiha said.

Noting that the project is already underway, Sybiha said in an interview on Monday with Turkish economics daily Dünya that they are interested in carrying out projects with experienced Turkish partners.

Sybiha also highlighted that the establishment of industrial parks could be a promising area.

“We want to work on this issue with Turkey,” he said, noting that in December Ukraine passed a law called “State Support for Large Investment Projects.”

“Except for tax exemptions, state or public land will be provided for the relevant companies to realize the project and investment in question. Moreover, construction and equipment work will be done with the state or local budget. The investment in question must amount to at least 20 million euros ($23.85 million). In the Great Construction project, projects with a budget of approximately $10 billion will be implemented in five years, including the construction of a total of 24,000 kilometers (around 14,900 miles) of roads, as well as bridges, rail systems, airports and the large ring road project within the framework of Kyiv,” the ambassador explained.

Sybiha noted that when the Ukrainian prime minister came to Turkey, he visited the city hospital in the capital Ankara.

“Its capacity, size as well as the quality of construction impressed him. Therefore, Ukraine is very keen to build hospitals like this right now,” he said, adding that he anticipates a delegation will soon visit Turkey.

Sybiha highlighted a decentralization reform recently enacted in Ukraine that enables local governors to receive an additional mandate while at the same time, a large budget was provided to these administrations to develop their own regions and provinces.

“They have gained one-on-one independence. It is useful to work with the regions, taking into account the said independence and budget allocation. There are also certain infrastructure projects in the regions,” he said, stressing that they want the involvement of Turkish companies.

Stating that almost every city in the country has an airport in need of modernizing or finishing as well as mentioning plans to launch recycling and water projects, he underlined that Turkish firms could demonstrate their experience and knowledge through the collaborations.

Further commenting on economic relations between the two countries, the Ukrainian diplomat said that Turkey and Ukraine overcame the challenge to their trade relations successfully during a period when world economies were grappling with the pandemic.

He also highlighted the important agreements signed across a variety of fields during the pandemic. The joint projects and cooperation between Ankara and Kyiv cover a wide range of sectors, with defense and industry being the primary fields of cooperation.

The trade volume between the two countries reached $4.3 billion during the first 11 months of last year, according to the Ukrainian ambassador citing his country’s official data.

Sybiha said the total volume will be around $5 billion once the statistics for the entire 12-month period are released, equating to almost the same volume of trade in 2020 as in 2019 despite the pandemic.

Responding to a question regarding the free trade agreement (FTA) expected to be reached between the parties, Sybiha said there are “some reasons for 2021 to be a determinative and conclusive year” for the signing of this kind of agreement.

“Our negotiating parties continue their meetings despite the pandemic. They present mutual offerings. When we consider all those developments it’s likely to ink such a deal this year,” he said.