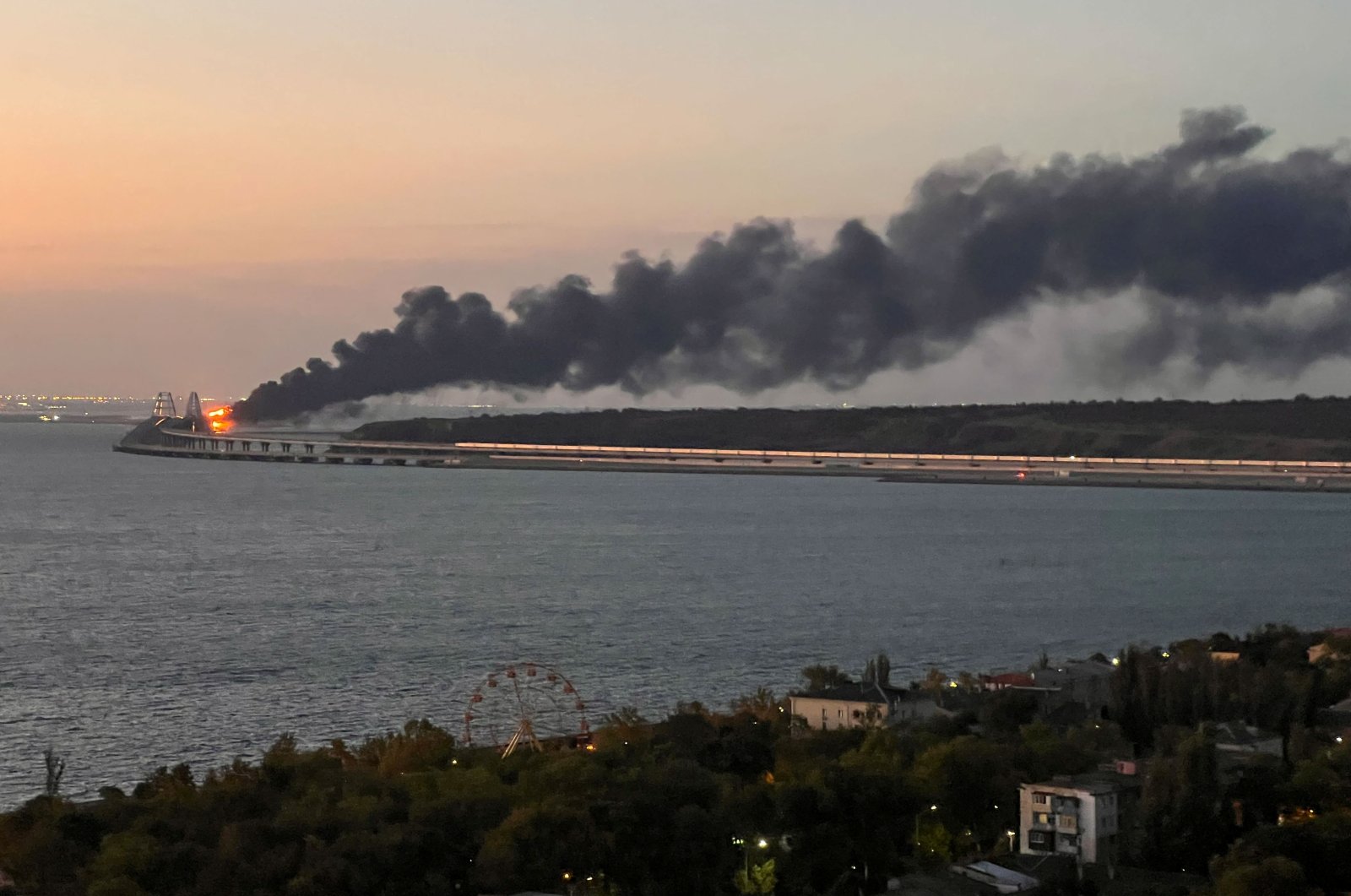 Russian state-backed media reported Saturday that a fire broke out on the bridge linking mainland Russia with the Russian-controlled Crimean Peninsula, hours after powerful blasts rocked the eastern Ukrainian city of Kharkiv, according to Azerbaijan in Focus, reporting Daily Sabah.

RIA-Novosti and the Tass news agency quoted local Russian official Oleg Kryuchkov as saying an object thought to be a fuel storage tank caught fire and that traffic has been stopped on the bridge. He said the span’s “navigable arches” weren’t damaged and that work was ongoing to extinguish the blaze.

Images shared on social media purported to show fire and damage to the bridge. The authenticity of the reports and images couldn’t be immediately verified.

The fire occurred hours after explosions rocked the eastern Ukrainian city of Kharkiv early Saturday, sending towering plumes of smoke into the sky and triggering a series of secondary explosions.

Kharkiv Mayor Ihor Terekhov said on Telegram that the early-morning explosions were the result of missile strikes in the center of the city. He said that the blasts sparked fires at one of the city’s medical institutions and a nonresidential building. There were no immediate reports of casualties.

The blasts came hours after Russia concentrated attacks in its increasingly troubled invasion of Ukraine on areas it illegally annexed, while the death toll from earlier missile strikes on apartment buildings in the southern city of Zaporizhzhia rose to 14.

On Friday, the Norwegian Nobel Committee awarded the Nobel Peace Prize to human rights organizations in his Russia and Ukraine, and to an activist jailed in Belarus, an ally of Moscow.

Berit Reiss-Andersen, the committee’s chair, said the honor went to “three outstanding champions of human rights, democracy and peaceful coexistence,” though it was widely seen as a rebuke to Russian President Vladimir Putin and his conduct of Europe’s worst armed conflict since World War II.

Putin signed documents on Wednesday to illegally claim four regions of Ukraine as Russian territory, including the Zaporizhzhia region that is home to Europe’s largest nuclear power plant, whose reactors were shut down last month.

That move was foreshadowed by Russia’s annexation of Crimea in March 2014, which was carried out after Moscow alleged residents of the peninsula had voted to join with Russia. That move was widely condemned, and prompted sanctions from the U.S. and the European Union.

Russia opened the first part of the span to car traffic in May 2018. The parallel bridge for rail traffic opened the following year.

The $3.6 billion project is a tangible symbol of Moscow’s claims on Crimea. It was Russia’s only land link to the peninsula until Russian forces seized more Ukrainian territory on the northern end of the Sea of Azov in heavy fighting, particularly around the city of Mariupol, earlier this year.