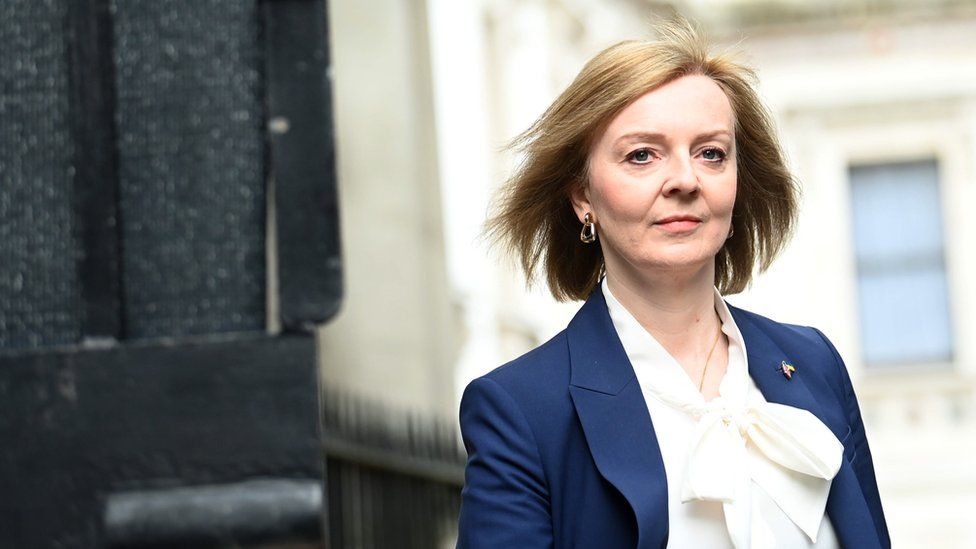 Britain and other Western powers should provide warplanes to Ukraine, Foreign Secretary Liz Truss will say, as part of long-term military support.

In a major speech in London, Ms Truss will argue that the West “must be prepared for the long haul and double down on our support” for the country.

Since Russia’s invasion, Ukraine has repeatedly asked allies to supply heavy armaments such as aeroplanes and tanks.

Nato has provided mostly only lighter weaponry amid fears of escalation.

Ms Truss will tell an audience at Mansion House, in the City of London, that “the fate of Ukraine remains in the balance” and that the West “cannot be complacent”.

“If Putin succeeds there will be untold further misery across Europe and terrible consequences across the globe. We would never feel safe again,” she will say on Wednesday evening.

“Heavy weapons, tanks, aeroplanes – digging deep into our inventories, ramping up production. We need to do all of this.”

Later, Downing Street said the government would not rule out training Ukrainian pilots or sending British jets to eastern Europe to “backfill” for allies who supply jets to Kyiv.

“Whilst there are no plans to send things like planes from the UK, certainly we want to work with other countries to ensure that Ukraine has the equipment that it needs,” the prime minister’s spokesman said.

Ms Truss will also reiterate a call for a boost in UK defence spending.

But Labour’s shadow foreign secretary, David Lammy, said the speech “appears to be an admission of failure after more than a decade of decline” in the government’s commitment to defence and security.

Liz Truss’s call for Ukraine to be given warplanes follows a growing trend. Western powers are ratcheting up military support for the country. Drones, long-range artillery, better anti-aircraft defence systems. So why not fighter jets?

Well, some countries – like Poland – have said they were willing to give Ukraine some ageing MIG29s. But it has not happened. That’s because Poland wanted the United States to replace the donated MIGs with newer, American combat aircraft.

Poland also wanted the US to deliver the MIGs to Ukraine themselves. The US refused to do this, citing logistical difficulties and the risk of provoking Russia by flying aircraft from a Nato base into contested airspace.

As of last week, the Pentagon said that while Ukraine might have received spare parts for planes, it had not received an entire aircraft from any country.

Ukraine would dearly love some ground attack warplanes to target Russian armour and artillery. But that appears unlikely until such time that the scale of Western support for Ukraine is such that aircraft become a natural next step, and the need to help Kyiv outweighs the risk of Moscow escalating the conflict.

So Ms Truss’s remarks do not mean that RAF warplanes are about to be sent to Ukraine soon.

What she is saying is that the option of giving Ukraine airpower should remain on the table. The trouble is that the loose language in the pre-briefed elements of her speech have triggered a debate that Western allies might not need right now.

But he told BBC Radio 4’s Today programme: “We need to listen very carefully to what the Ukrainians need.”

Germany has also pledged to send about 50 anti-aircraft tanks.

As well as her demand for more defence spending at home, Ms Truss will argue that Nato’s target of 2% of GDP – which the UK met last year – should be “a floor, not a ceiling”.

She will say there has been a “generation of under-investment” in the West, and the Russian invasion showed “the architecture that was designed to guarantee peace and prosperity has failed Ukraine”.

Labour’s Mr Lammy said: “The Conservatives wrongly de-emphasised European security in the Integrated Review, made deep cuts to the British army over many years, gave up soft power through cutting development, and hurt alliances with Europe and the United States, including by risking peace in Northern Ireland.”

Prime Minister Boris Johnson said on Tuesday he would be happy for Ukrainian forces to use British-supplied weapons to strike targets inside Russia to protect themselves.

Russian Foreign Minister Sergei Lavrov has said that, by arming Ukraine, Nato had already effectively “entered into a war with Russia through proxies”.