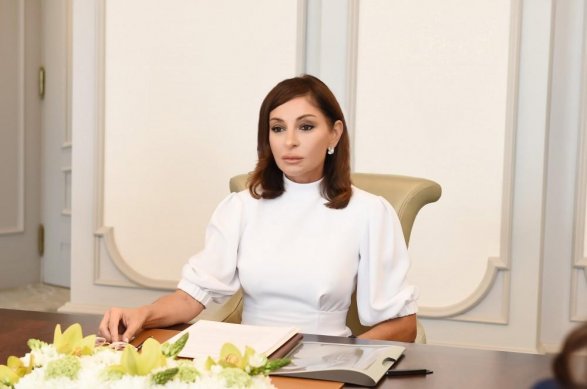 Mehriban Aliyeva On the Restoration Of Religious Monuments In Karabakh

“Heydar Aliyev Foundation is starting a restoration project of our religious monuments, mosques in the ancient Karabakh land.” This is stated in the publication of the first vice-president of Azerbaijan Mehriban Aliyeva on Instagram.

“Dear compatriots! All of us these days feel pride and joy in the restoration of the territorial integrity of Azerbaijan. Thanks to the courage of our heroic soldiers and officers under the leadership of the President of the Republic of Azerbaijan, Supreme Commander-in-Chief of the Armed Forces Ilham Aliyev, our lands, which were under Armenian occupation for almost 30 years, were liberated.

“Of course, each of us contemplates the current state of the lands liberated from occupation with pain in our hearts. Over the years, the Armenian aggressors have destroyed our cities and districts, the residential and administrative buildings located there, the entire infrastructure, plundered our natural resources and vandalized religious, historical, cultural monuments in these territories. There is no trace of Karabakh region, which was once a picturesque corner of Azerbaijan.

“But I want to say with confidence that under the leadership of President Ilham Aliyev, we will turn the entire Karabakh region into one of the most beautiful corners of Azerbaijan. Life will be revived here again, all our districts will be restored, our citizens will live and create in their native lands,” the publication says.

“Dear compatriots, Heydar Aliyev Foundation has been implementing projects and programs in various fields in Azerbaijan from the first day of its inception. The Foundation’s activities aimed at preserving and restoring cultural, historical and religious monuments are known to everyone. And today, with a sense of pride, I want to inform you that Heydar Aliyev Foundation is embarking on a project to restore our religious monuments and mosques, which are the national heritage of the Azerbaijani people, on the ancient Karabakh land. As part of the project, with the participation of local and foreign specialists, restoration, conservation and reconstruction of our sanctuaries in the region will be carried out. The corresponding work has already begun on the restoration of places of religious worship destroyed during the years of occupation in the city of Shusha and the Aghdam region.

“Our sacred places, which were once barbarously destroyed by the Armenians and turned into a barn, will be revived again, and the sounds of azan and prayers will be heard in all mosques on the territory of Karabakh!

“With deep respect and love, your Mehriban,” the publication says.