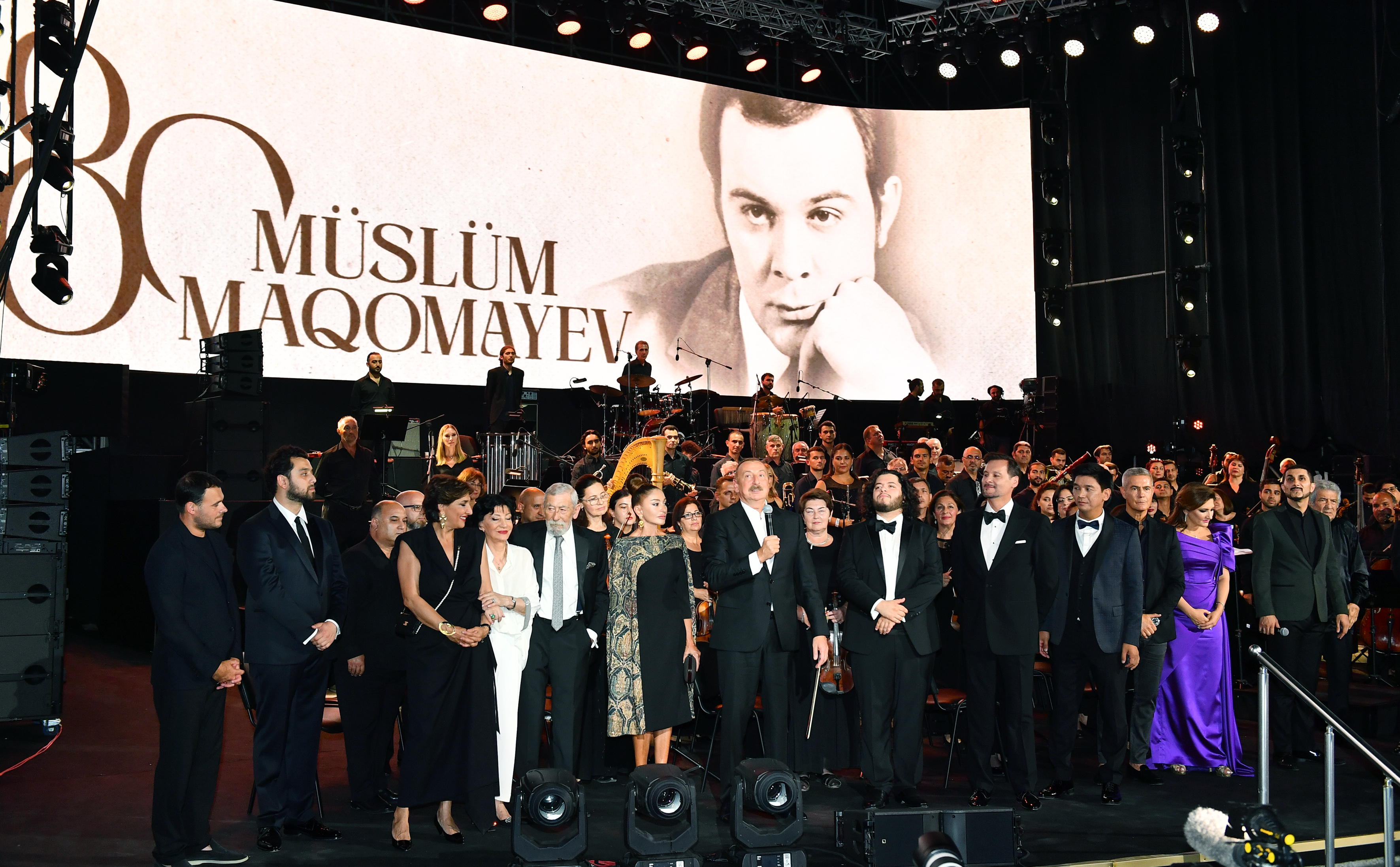 On 17 August, a memorial evening to mark the 80th anniversary of the birth of world-famous opera and variety singer, composer, the People’s Artist of the USSR and Azerbaijan, Muslum Magomayev, was organized by the Heydar Aliyev Foundation at the Baku Green Theater Concert Complex, according to Azerbaijan in Focus, reporting AzerTac.

President of the Republic of Azerbaijan Ilham Aliyev and First Lady Mehriban Aliyeva participated in the event.

Video footage of national leader Heydar Aliyev’s remarks about Muslum Magomayev was shown on the screen.

After the concert, President Ilham Aliyev, First Lady Mehriban Aliyeva and Muslum Magomayev’s wife, People’s Artist of the USSR and prominent opera singer Tamara Sinyavskaya came onto the stage to meet with the performers.

– It is an unforgettable day today. This morning, we unveiled the statue of dear Muslum in one of the most beautiful places of our city, on the boulevard. I should also state that there were no statues on the boulevard before. The first statue has been erected in honor of Muslum, and this is natural. After all, the boulevard is the heart of our city. The boulevard was Muslum’s favorite place. Today, this statue shows again how much the Azerbaijani people love Muslum and how much he deserved this love.

Our artists have presented us with a wonderful gift today. I am sure that everyone who listened to this concert enjoyed it a lot. The unforgettable face of Muslum passed before our eyes once again. Those who knew him closely saw again what a great artist and what a wonderful person he was.

I would like to thank all the participants of today’s concert. We have been celebrating the day of Muslum since morning. In the most beautiful place of the city, on the Seaside Boulevard, right against the backdrop of the Caspian Sea beloved by all of us, which he sang about in his unforgettable “Blue Eternity”, there is a magnificent statue of Muslum, and it personifies his beauty, his talent, his stature, his proud appearance, his dignity. Today, when we were unveiling the statue, I said that he wrote the “Farewell, Baku” song, which has just been played, shortly before dying. I heard it for the first time at the farewell ceremony for Muslum in Baku, in the Philharmonic Hall, and I was deeply moved by this song because he was saying goodbye to the city, he was saying goodbye to his friends, he was saying goodbye to his life. One can only guess how hard it was for him to write this song and what feelings he experienced. Of course, speaking about this, I said that this statue, which stands here, says that Baku has never said goodbye to Muslum and never will. He is with us.

I want to thank our performers. I am sure that the beautiful Azerbaijani voices have captivated all of us. This is our pride. This shows that the cause of Muslum lives on, and representatives of our people reach the heights in creativity from generation to generation. And just as we have been proud of Muslum for our entire lives, we are proud of today’s wonderful performers too.

Of course, I would like to specifically thank our dear and beloved guests, who have come from friendly countries. Thank you for being with us on this day, thank you for your love, for your memories of Muslum and for your attitude. Today is an unforgettable day. Once again remembering our dear friend, brother and great son of the Azerbaijani people, we are saying that Muslum is always with us. And Nani Bregvadze sang about it today. Dear Vakhtang Kikabidze sang a wonderful song dedicated to our country and an amazing potpourri. All our performers today were inspired by the image of Muslum. May God grant health to all, to all countries and all peoples. Long live Azerbaijan! Thank you!

It is worth noting that Muslum Magomayev was born in Baku on 17 August 1942. He first appeared on stage at the age of 14. In the 1960s and 1970s, Muslum Magomayev earned acclaim all over the world. At that time, he was a soloist of the Azerbaijan State Academic Opera and Ballet Theater and had completed an internship at the world-famous La Scala Theater in Italy. At the age of 31, he was awarded the title of the People’s Artist of the USSR. There were about 600 compositions in his repertoire. Muslum Magomayev is also the author of beautiful songs. The remarkable and universally memorized “Azerbaijan” song composed to the words of national poet Nabi Khazri is one of the most beautiful works dedicated to our country. Muslum Magomayev’s contributions to the development of national musical culture have always been highly appreciated. He has received the highest awards of the independent Republic of Azerbaijan – the orders of “Shohrat” and “Istiglal”.

A statue of unforgettable singer Muslum Magomayev was unveiled in the Baku Seaside National Park on 17 August.