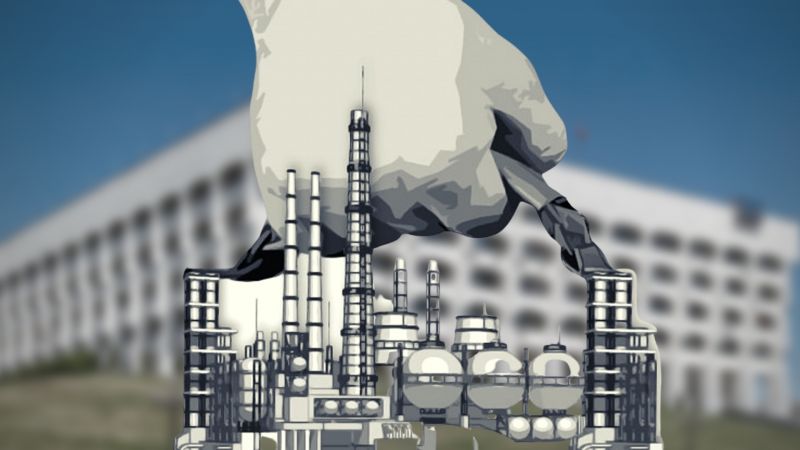 Minister of Economy Announced the Start of Large-Scale Privatization

On December 15, the Minister of Economy of Azerbaijan Mikail Jabbarov shared the announcement of the start of “large-scale privatization” – the country’s second attempt to attract large investments through the sale of large objects, according to Azerbaijan in Focus, reporting Turan News.

The first attempt was made in the 90s, when large enterprises, mainly in the metallurgical sector, in the processing industry were privatized through investment competitions.

Thus, state-owned blocks of shares in about 130 enterprises were sold, and the total investment from buyers in the development of these plants exceeded 1 billion manats (over 20 years).

Since 1995, small-scale privatization made it possible to sell hundreds of thousands of small businesses. Also, about 2 thousand joint stock companies were created, and half a million people became owners of shares.

However, every year revenues from privatization fell, the budget received less than 100 million manats a year.

It is noteworthy that revenues from privatization are involved in covering the budget deficit (reflected in the laws on the state budget) and their reduction negatively affects the implementation of this task.

Mikail Jabbarov, who was appointed Minister of Economy in 2019, one of the most influential representatives of the government, dashingly took up reforms. The issue of privatization was no exception, especially since the State Committee for Property Issues was abolished in the same year (2019) and became a part of the Ministry of Economy as a department.

In January 2020, Jabbarov stated: “We intend to reconsider the approach to the conditions for the privatization of state property. This also applies to property that has already been put up for privatization. This is an important process. In addition, we consider it necessary to check the efficiency of the activities of those enterprises that were created after the announcement of large programs for the privatization of state property. This is a long process, and it requires a lot of work from us,” Jabbarov said at a press conference in January 2020, specifying that 163 thousand small and medium-sized objects in Baku and 74 thousand in the regions will be inspected for existing private enterprises.

In particular, in April 2020, EBRD President Suma Chakrabarti said that the Bank is ready to “invest on favorable terms more than $ 250 million under state guarantees in energy, infrastructure and IT projects, and we are talking about the commercialization (sale, denationalization) of some state-owned enterprises in the medium term.”

The EBRD President noted that the “commercialization” of a number of state-owned enterprises may, in particular, affect the power facilities, AzTelecom, the transport sector. In his opinion, “the commercialization and privatization of state-owned enterprises in Azerbaijan can be carried out through the state investment holding. This will help to restore order and restore Azerbaijan after the crisis (due to COVID-19 and the fall of oil prices in the world) as soon as possible,” the head of the EBRD stated in April.

Even then, the President of Azerbaijan noted that “we are ready for commercialization and partial privatization.”

Further, on August 6, the head of state stressed that Azerbaijan should follow the path of economic liberalization, in particular, through large-scale reforms of the privatization process.

“We should be interested in both private and foreign companies. In some cases, applications from companies are not considered or are delayed. Some projects are being implemented, some are not. We ourselves should be interested in this, and present business plans to local and foreign investors, inform about enterprises and offer to privatize them,” the head of state said in the summer.

Aliyev stressed that if a strategic investor plans and guarantees large investments in a privatized enterprise, then this enterprise can be privatized at a symbolic price.

“This is the only way we can launch these enterprises. For example, on the territory of Baku, there are many destroyed enterprises that have large territories that were left from the Soviet period. It is possible to create new industrial enterprises in these territories, of course, taking into account modern environmental standards, at the same time, it is possible to implement large projects in the field of construction here,” the head of state noted.

The President pointed to the problems in the work of SOCAR, Azerenergy, Azersu, the Caspian Shipping Company, Azerbaijan Railways and AZAL, a number of structures of which, in his opinion, do not work effectively.

Without postponing the issue any further, on August 7, the head of state signed a document on the creation of the Azerbaijan Investment Holding (AIH) to improve management efficiency in the public sector, and on November 5, he approved a list of state-owned companies, as well as economic entities with a state share in the capital, which in fact in 2021 will be transferred to the management of the AIH.

In addition, the following structures subordinate to the Ministry of Transport, Communications and High Technologies of Azerbaijan are also transferred to the management of the AIH: Baku International Sea Trade Port, Aztelekom LLC, AzInTelecom, Azerpocht, and Baktelekom.

Head of the Ministry of Economy – on new steps towards privatization

“AIH is assigned a crucial role in improving the system of public administration,” Mikayil Jabbarov said on December 15 at the event dedicated to the presentation by AHK-KPMG of a report on the business environment for foreign investors in Azerbaijan for 2020.

“This is important for Azerbaijan’s compliance with international standards, for increasing transparency in the management system,” the Minister said.

According to him, “the portfolio of 21 large state-owned companies and objects that will be put up for privatization in 2021 are already ready.”

It is no coincidence that this statement was voiced precisely at this virtual forum, because Azerbaijan, since 1994, has been attracting large foreign investments mainly in the oil and gas sector, is trying to reduce its dependence on it and is ready to try “large-scale privatization” in the 21st century, taking into account the experience of mistakes made in the 90s.

The Minister did not specify which state-owned companies would be put up for sale in the first place and under what scheme, under what conditions, but noted that a serious privatization program was being prepared.

It is worth to note, that in the late 90s, when Azerbaijan signed the first international multibillion-dollar oil contract (for Azeri-Chirag-Gunashli) and launched privatization, many companies and funds decided that they could become shareholders of SOCAR – the most “delicious piece” of the economy, but this did not happen. Oil was declared the property of the people and named the most important political and economic factor in the stability of Azerbaijan, which it is today and will be for many years to come.

Azerbaijan is attracting investments in the oil and gas sector through production sharing contracts (PSA) for the development of fields, and no changes are expected in this regard.

However, a number of SOCAR’s core assets, for example, infrastructure, in the opinion of independent economists, could be given for “partial privatization”.

And if such assets are included in the list of the Ministry of Economy, then a new round of privatization in Azerbaijan can be welcomed with joy.

Since 2017, there are portals emlak.gov.az, privatization.az, e-emdk.gov.az dedicated specifically for auctions; but whether the details will be published there is not yet clear.

According to economist Nariman Agayev, there are some state-owned facilities in the country, from which there is little return to the budget, but which could be privatized along with the land plots related to them.

“In order to make the object attractive for privatization and at the same time to ensure that the new owners do not change the profile of its activities, a number of measures can be taken. For example, the state will provide benefits, and the owner undertakes not to change the profile of the institution in the next five years,” the independent expert said.

First Vice President of the EBRD Jurgen Rigterink noted that “the new stage of privatization in Azerbaijan will not mean that IPOs will be held immediately, where the government will sell 99% of its stake.”

According to him, the EBRD, which allocated 3.3 billion euros to finance 170 projects in Azerbaijan, is looking forward to the privatization of not only enterprises, but also the International Bank of Azerbaijan (IBA).

“If the Azerbaijani authorities go to the privatization of such an important bank as the IBA, we will be very happy to take part. It is very important that the banking sector has become more competitive than it is now. The future of the banking sector should depend less on the state,” Rigterink said at one of his meetings with journalists in Baku.

Earlier, Finance Minister of Azerbaijan Samir Sharifov noted that “IBA finished 2019 with good indicators and we can say that the bank has found its business strategy, and this is a good basis for making further decisions on the bank’s privatization”.

It remains to wait for the announcement of the list of state-owned facilities, which, according to the head of the Ministry of Economy, can really interest serious investors, and therefore bring income to the Azerbaijani economy in a difficult period of its development.