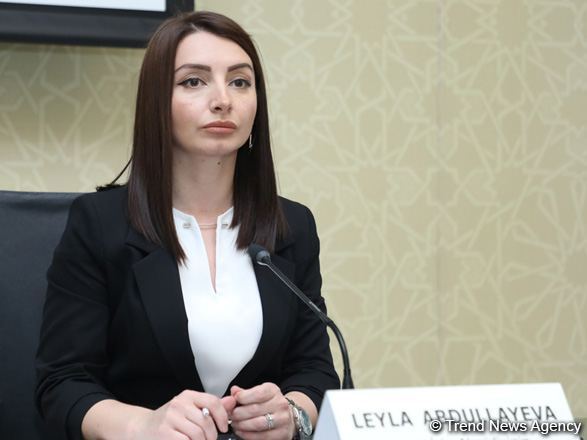 “The “historical” comments of Armenia, which considers history to be its “strong” side, have already become a joke,” Abdullayeva said.

“However, this country, proceeding from its “historical” fantasies, still puts forward territorial claims to the neighboring countries,” the spokesperson said. “This is an absolutely unwise policy for the smallest and weakest country in the region.”

“We again remind the Armenian side that thousands of Armenians still live in Baku, Sumgayit, Ganja and other cities of Azerbaijan,” Abdullayeva said. “If Armenia did not put forward territorial claims against Azerbaijan and did not pursue an aggressive policy against it, this figure would have been higher.”

“As for the allegations about the War Trophy Park in Baku, it is a symbol of the triumph of law and justice over the aggressor,” the spokesperson said. “The fortifications, erected by Armenia in the occupied territories of Azerbaijan, which are demonstrated in the park, testify that Armenia has been hypocritical for decades, “holding negotiations” on the conflict’s settlement.”

“Calling the park “a monument to revanchism”, the Armenian Foreign Ministry forgets that as opposed to Azerbaijan, monuments to numerous terrorists and war criminals have been erected in Armenia,” Abdullayeva said. “I wonder why the monuments in memory of the victims of the Holocaust, Mahatma Gandhi were desecrated in Armenia, rather than those monuments?!”

“In conclusion, we would like to emphasize that Armenia, the authors of numerous “historical discoveries”, does not need to invent anything to ensure peace and security in the region, normalize relations between the two countries,” the spokesperson said. “This can be achieved only by observing international norms and principles.”