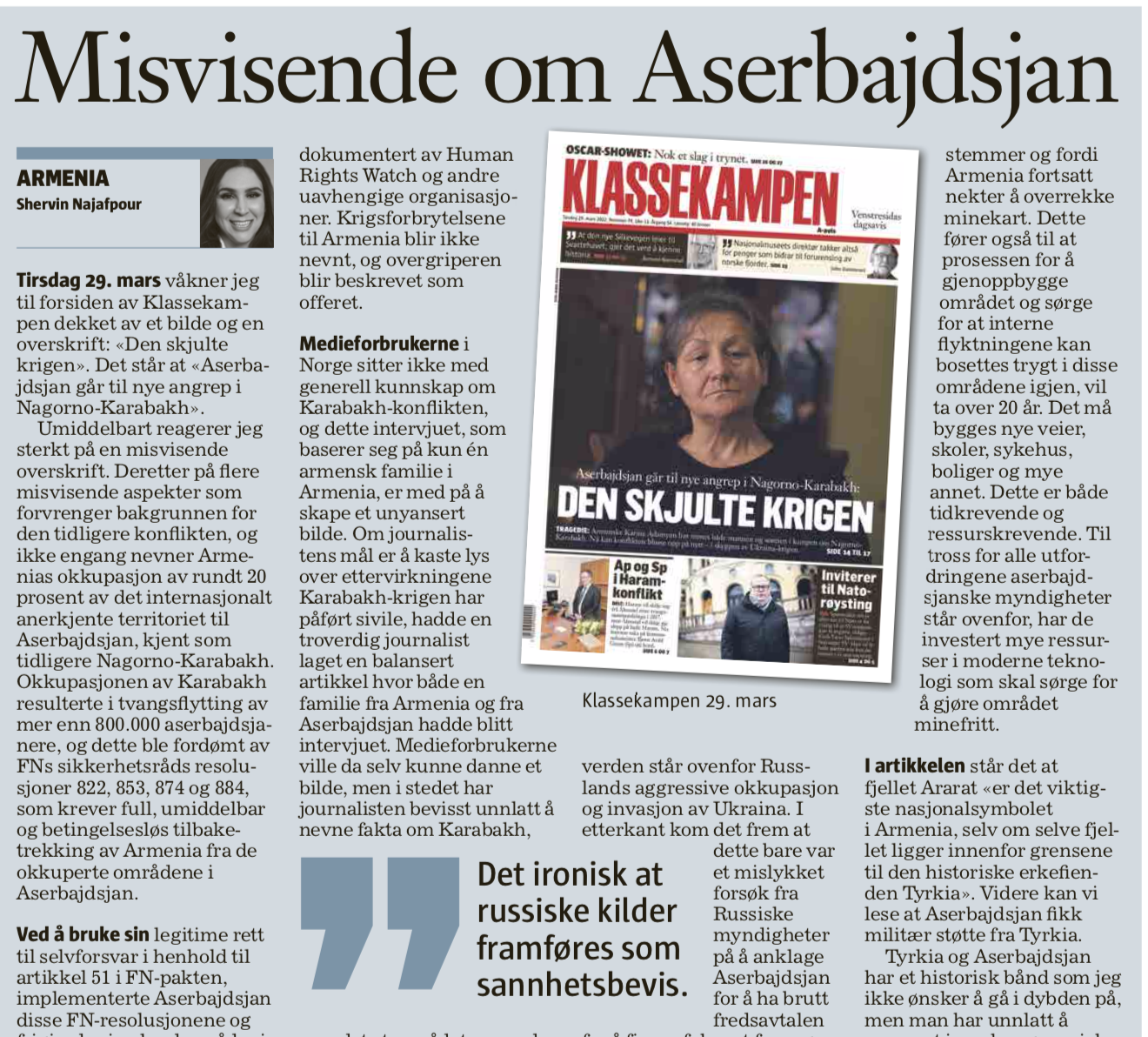 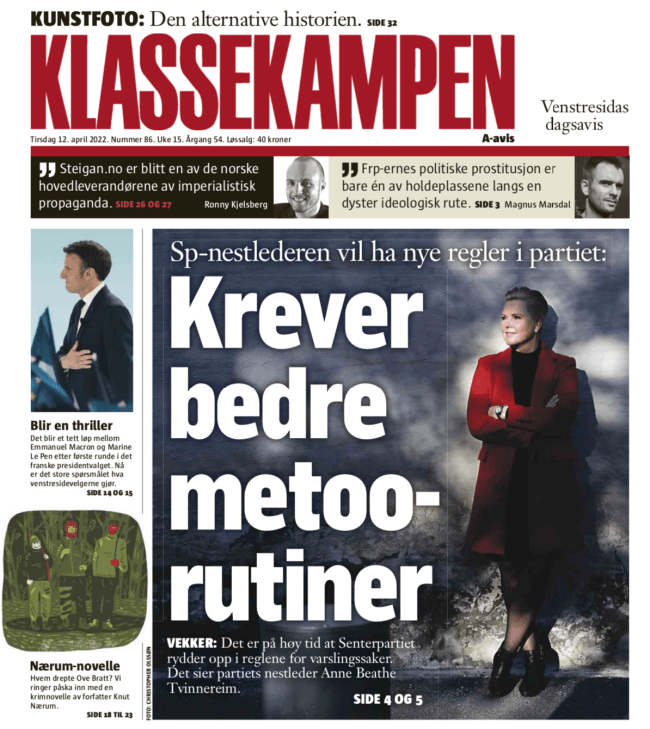 The Armenian tradition of exaggeration and fabrication of historical facts, especially when it comes to their suffering, continues to this day. This kind of exaggerated news, as usual, quickly finds its way to foreign media, drawing the attention of the international community. Or vice versa, the media outlets that represent one-sided information quickly find their way to the Armenian fabricated historical facts. The old saying goes: “A witness saves lives when he tells the truth; when he tells lies, he betrays people”.

“The Hidden War” article published in Norwegian KLASSEKAMPEN newspaper is a good example of the level of exaggeration of historical facts claimed by Armenia. In response to the biased Armenian opinions, contributing to the global pandemic of Armenian misinformation about Azerbaijan, Shervin Najafpour, Chairwoman of CAN – cultural bridge-building organization between Norway, Azerbaijan, and Turkey, put well-known facts based on international law which leave no place for Armenian complacency. A war on infodemics is beyond the COVID pandemic and must be addressed on all topics and subjects, straightening out facts, and ensuring transparency and fair information is available and distributed.

On Tuesday, March 29, I woke up to the front page of the Klassekampen with a picture and a headline: “The Hidden War”. It says that “Azerbaijan is launching new attacks in Nagorno-Karabakh”.

Immediately, I reacted strongly to a misleading headline. Then on to several misleading aspects that distort the background of the previous conflict, and do not even mention Armenia’s occupation of around 20 percent of the internationally recognized territory of Azerbaijan, known as the former Nagorno-Karabakh. The occupation of Karabakh resulted in the forced relocation of more than 800,000 Azerbaijanis, and this was condemned by UN Security Council Resolutions 822, 853, 874 and 884, which call for the full, immediate, and unconditional withdrawal of Armenia from the occupied territories of Azerbaijan.

By exercising its legitimate right to self-defense under Article 51 of the UN Charter, Azerbaijan implemented these UN resolutions and liberated its territories in 2020, in a war that cost both parties over 5,000 lives. During the Second Karabakh War, Armenia launched three ballistic missile attacks on Azerbaijan’s second-largest city, Ganja. The next attack took place with cluster munitions in the town of Barda, and in these two towns, civilians became the target of terror. Both cities are located far from military bases and these actions were condemned and documented by Human Rights Watch and other independent organizations. Armenia’s war crimes are not mentioned, and the abuser is described as the victim.

Media consumers in Norway do not have general knowledge about the Karabakh conflict, and this interview, which is based on only one Armenian family in Armenia, helps to create a nuanced picture. If the journalist’s goal is to shed light on the repercussions of the Karabakh war on civilians, a credible journalist would have made a balanced article in which both a family from Armenia and from Azerbaijan would have been interviewed. The media consumers would then be able to form an image themselves, but instead, the journalist has deliberately failed to mention facts about Karabakh, such as the fact that the area was under occupation for almost 30 years.

“It is ironic that Russian sources are presented as proof of truth.”

In the article we can also read that: “The Russian Ministry of Defense reported on Saturday that Azerbaijani forces had penetrated into the areas these forces are supposed to protect and that Azerbaijan had carried out four drone attacks.” It is ironic that Russian sources are presented as proof of truth, especially at a time when the world is facing Russia’s aggressive occupation and invasion of Ukraine. In retrospect, it emerged that this was merely a failed attempt by the Russian authorities to accuse Azerbaijan of violating the peace agreement in order to remove the focus from itself and its own war crimes.

Nor is it mentioned that one million landmines have been planted in Karabakh. And that Armenia has received assistance from Russia and Iran. According to international experts, it will take between 10 and 15 years to secure a mine-free area, because 25 percent of the mine maps that have been handed over to Azerbaijan are not correct and because Armenia still refuses to hand over landmine maps. This also means that the process of rebuilding the area and ensuring that the internally displaced refugees can be settled safely in these areas again will take over 20 years. New roads, schools, hospitals, homes, and much more must be built. This is both time-consuming and resource-consuming. Despite all the challenges facing the Azerbaijani authorities, they have invested a lot of resources in modern technology that will make the area mine-free.

The article states that the mountain Ararat “is the most important national symbol in Armenia, even though the mountain itself lies within the borders of the historical arch-enemy Türkiye”. Furthermore, we can read that Azerbaijan received military support from Türkiye.

Türkiye and Azerbaijan have a historical bond that I do not want to go into depth, but it has been omitted that the Iranian and Russian authorities have and continue to supply Armenia with destructive weapons. Iranian authorities have repeatedly been arrested for illegal smuggling and for supplying Armenia with weapons. This has also been documented and has been mentioned in several international media.