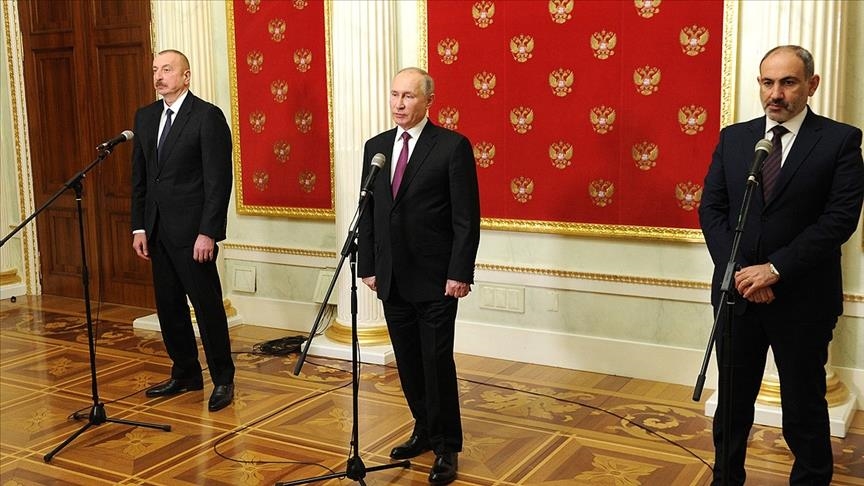 Post-crisis era in Nagorno-Karabakh issue augured well with a trilateral summit held in Moscow on January 11th upon the invitation of the Russian president Vladimir Putin. Russia demonstrated that it is still following up the efforts that it had initiated by forcing Armenia to sign a ceasefire.

The summit is held two months after the crisis. This is a reasonable period to take stock of the progress made since the signing of the ceasefire agreement. If it were short after the ceasefire, it would not have given a clear idea on how the situation was evolving. If it were to be organised at a later date, there would have been risks of festering. So the Moscow summit was held after an ideal interval following the ceasefire.

Dissatisfied Armenian diaspora abroad continues to provoke the mainland Armenians to adopt a tougher attitude and be more uncompromising. French National Assembly adopted a decision – with only a symbolic value – to recognize Karabakh as an independent state, while Armenia itself did not yet recognise it. Armenian diaspora in Moscow expressed its discontent about the Prime Minister Pashinyan’s policy by putting in front of the Armenian Embassy in Moscow a poster that read “Pashinyan the Turk”. Armenians in Yerevan displayed a poster with less-than-nice words about president Putin in front of the Russian Embassy.

The January 11 summit lasted four hours, which means that detailed debates must have taken place. Apparently Russian bureaucracy has prepared its files scrupulously, so that the follow-up mechanism would not bog down.

Expert level sub-groups have been set up to submit concrete plans to Azerbaijani and Armenian Deputy Prime Ministers who will hold their first meeting on 30 January. The tight schedule is a sign that Putin wanted to properly pin down everything.

In his address to the media, Putin pointed out that the ceasefire agreement was successfully implemented and that, apart from minor incidents, there was no noticeable breaches of the commitments. Around 50 thousand people returned to Karabakh after the ceasefire, but it was unclear what the ratio of returnees among the Azerbaijanis and Armenians was.

Putin also paid tribute to the member countries of the Minsk Group, namely the US and France, but it was apparent that the Karabakh issue unfolds more smoothly without the interference of these two other countries. Azerbaijan has now every excuse to insist on the exclusion of France from the chair of the Minsk Group, which is in charge of helping to solve the Karabakh issue.

One discordant voice came from Pashinyan who said that the transport projects should not be implemented before all prisoners of war are exchanged. He was probably voicing the worry of Armenian families who want to learn the fate of their loved ones.

Pashinyan also emphasized the importance of determining the status of Karabakh. The answer to this question came one week later from the Russian Foreign Minister, Sergei Lavrov. In a press conference held on 18 January, Lavrov said: “This is not a proper time to talk about the status of Karabakh”, adding: “reference to this subject was avoided on purpose in the ceasefire agreement.” Apparently Russia is inclined to wait until this issue comes to fruition.

The main subject of the summit was the removal of the obstacles in the transportation connections. President Aliyev strongly supported Putin’s approach and expressed his wish that the neighbouring countries would contribute to the improvement of the transport networks in the region. This subject is important not only because the connections between the countries of the region are less than satisfactory, but also because Russia’s connection with the region is interrupted as a result of Georgia’s closure of the border with Abkhazia in 2008.

Putin now proposes unblocking the interrupted transport connections, improvement of the existing roads and the construction of the new ones that will improve the communications among the South Caucasus countries and between Russia and them.

Two transport corridors have become an important issue between Azerbaijan and Armenia. For Azerbaijan it is the Meghri corridor and for Armenia, the Lachin corridor.

Russian foreign minister Sergei Lavrov, in the press conference he held on 18 January, made a statement that is indirectly linked to this question. Talking about the link between Armenia and Karabakh, he said that Azerbaijan did not oppose to keeping the Lachin corridor open.

Russia may have launched the Meghri corridor project with a view to counterbalancing the favour made to Armenia by persuading president Aliyev to keep the Lachin corridor open. The Meghri project consists of the construction of a railway and the improvement of an already existing highway that will cross the Meghri corridor in the south of Armenia, close to the Iranian border. These transport lines will also link the Nakhchivan exclave to Azerbaijan proper.

The construction of Meghri corridor is part of a bigger project that will link Armenia to Russia through the coast of the Caspian Sea. With this project Russia will be killing several birds with one stone: It will establish a reliable transport link between Russia and Armenia and with the region as a whole; it will reach the Iranian border with a combination of railways and high standard roads; it will link Yerevan to Iran; it will make a favour to Azerbaijan by improving the Meghri corridor in exchange for making the Lachin corridor available to Armenia and it will fulfil Turkey’s wish to connect with Azerbaijan. Most important of all, this important project will further facilitate commercial exchanges between Azerbaijan, Armenia, Russia and Turkey. Increased commercial relations may also contribute to a political thaw that the South Caucasus really needs.