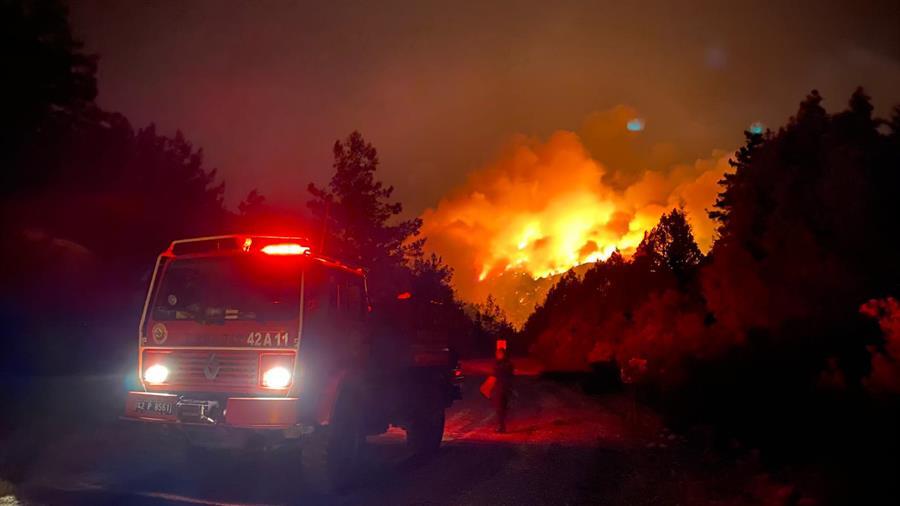 Most of forest fires under control: Minister

Turkey has been battling wildfires which broke out in 71 different areas in 21 provinces, killing four people since July 28, as the country’s agriculture and forestry minister announced that at least 57 of these forest fires have been under control.

As part of a measure to ease the financial burden on the victims of the flames, loan repayments for those injured will be postponed, Pakdemirli said.

To help heal the environment after the blazes are doused, he said, new forests will be planted with the first rains to replace those that had been charred, with afforestation work to start at the end of October and beginning of November.

The wildfires started on early July 28 in four different locations in Antalya at the same time and the news of wildfires came successively from different provinces, causing suspicions of arsons.

“As of tomorrow, we’ll start partial payments to our citizens whose damage has been determined,” added Çavuşoğlu.

He underlined that the transfer of a total of 23.5 million Turkish liras (around $2.8 million) had begun from various institutions and ministries for emergency needs for the fires in Manavgat district in Antalya.

Reminding that people wanted to province financial aid, Çavuşoğlu said, “The governor of Antalya will open a bank account. People willing to send money may get in touch with the governor’s office.”

A total of 2,300 buildings were affected by the fire, Kurum said, adding that as part of damage assessment efforts, 252 buildings had been examined so far, while 126 were found to have been heavily damaged or destroyed.

He went on to say that 465 construction sites were affected by the fires in the southern province of Mersin, while four villages were evacuated in nearby Osmaniye province.

The country mobilized all of its resources at its capacity to fight the fires, said President Recep Tayyip Erdoğan at a press conference after Friday prayer.

“Turkey has one of the best fire fighting forces in the world. We are fighting with 45 helicopters,” Erdoğan added.

The Turkish Aeronautical Association said all of its 20 air vehicles are working against the fires across the country.

Separately, entrance to forests and forestlands in eight provinces, including Istanbul, has been banned as of July 10.

“Due to hot weather and rough winds, having a picnic or stopping over inside or around the woods of the metropolis have been forbidden between July 30 and Aug. 31,” said a statement issued by the Istanbul Governor’s Office.

This article originally appeared in Hurriyet Daily News on 28 July 2021.