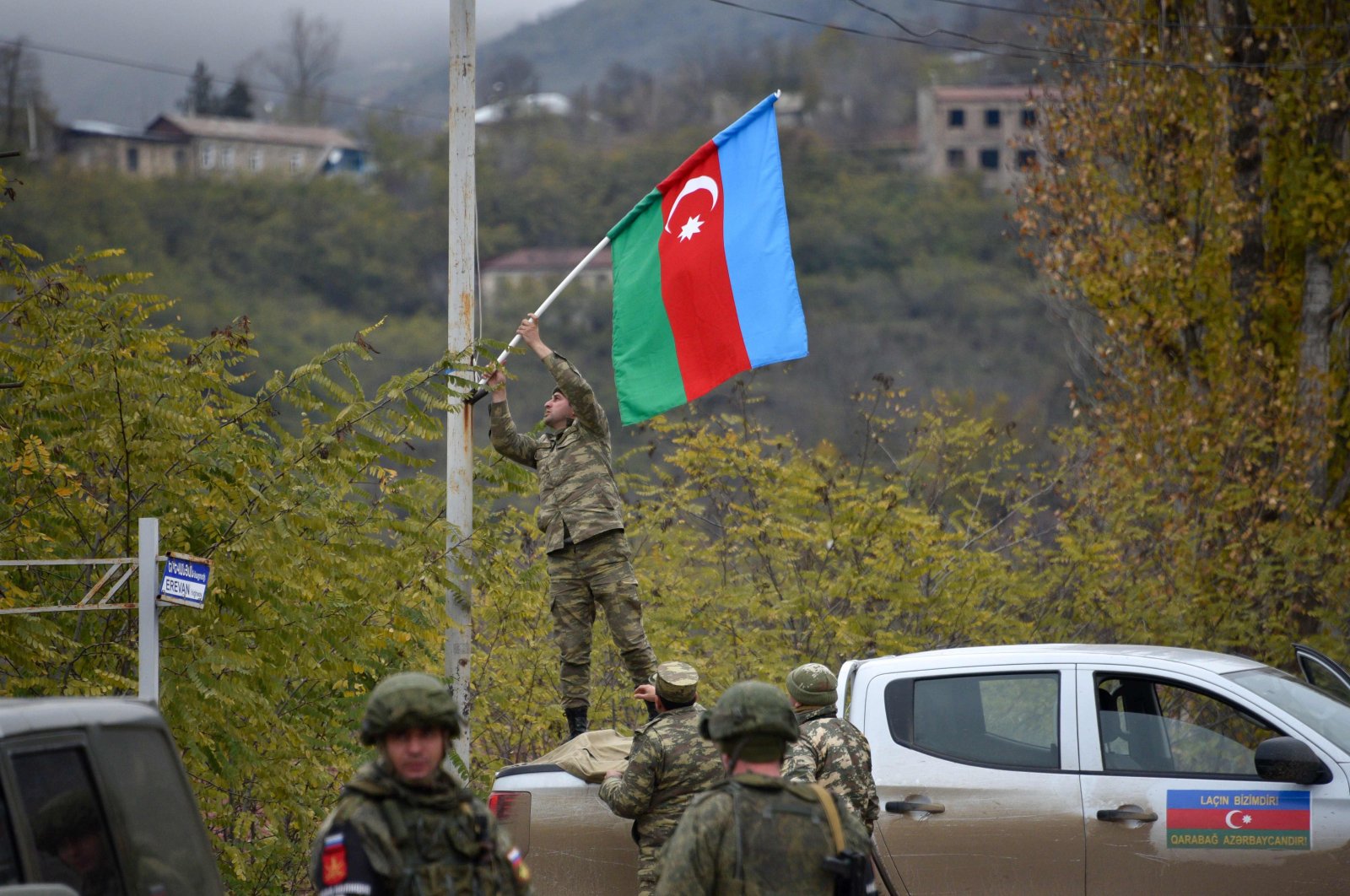 As Russia and Turkey expand their influences in the Caucasus, a new regional platform rather than the outdated Minsk group can lead to productive results and effective cooperation.

New realities have emerged as a result of the recent Karabakh conflict and the following cease-fire deal can result in the formation of a more productive, efficient and cooperative regional platform. It will be beneficial for all actors in the Caucasus region while the Minsk group and its western co-chairs are being left out of the new equation, experts say.

By the end of the 44-day armed conflict that started in late September, Azerbaijan recaptured many settlements in the Nagorno-Karabakh region and surrounding areas from the nearly three-decade occupation of Armenia. Turkey and Russia have also taken the role of peacekeepers by deploying troops to the region following the cease-fire deal signed on Nov. 10.

Tutku Dilaver, an analyst at the Ankara-based Eurasian Studies Center (AVIM), said given the new realities in the Caucasus region, a more inclusive platform with the participation of regional actors rather than the existing Minsk Group would create much more positive results.

“Under the light of recent developments, it can be easily said the Minsk Group has been excluded from the process due to its failure to produce solutions or perspectives,” she added.

The Organization for Security and Co-operation in Europe (OSCE) Minsk Group, co-chaired by France, Russia and the U.S., was formed in 1992 to find a peaceful solution to the conflict but to no avail.

While Azerbaijan won on the field, all regional actors can be counted as winners when analyzing from a wider perspective, Elnur Ismayil, a Caucasus expert, said while singling out Western countries as the losers.

It was proven that most Western parties aimed to preserve the status quo in favor of Armenia, and the Minsk group’s co-chairs, France and the U.S., were completely ineffective in creating a solution for the latest crisis, he explained. “Disturbed by the involvement of the Western countries in the region, Russia favors Turkey’s proposal that regional issues should be resolved by regional actors.”

Earlier this month during a visit to Azerbaijan’s capital Baku, President Recep Tayyip Erdoğan proposed a six-country regional cooperation platform including Russia, Turkey, Azerbaijan, Iran, Georgia and Armenia, saying it could be a win-win initiative for all regional actors in the Caucasus.

Another point Dilaver highlighted was that the West has lost its sphere of influence in Armenia due to the changing balances of power in the region.

“Within this context, Russia’s worry that it had been surrounded by the West in the Caucasus has been relieved for a while. Going forward, the U.S. and France’s place in the new format that will be established for a permanent peace deal is unclear. But we can say the necessity of the Minsk Group co-chairs was completely abolished after it became clear that France had lost its neutrality.”

The Minsk Group was supposed to be neutral on the issue but Paris fiercely supported Yerevan during the conflict. Earlier this month, France’s National Assembly approved a resolution calling on the government to recognize Nagorno-Karabakh under the control of separatist Armenian forces as a “republic.”

Nagorno-Karabakh lies within Azerbaijan but was under Armenian occupation since a separatist war there ended in 1994. That conflict left the predominantly Armenian populated Nagorno-Karabakh region and substantial surrounding territories in Yerevan’s hands. Heavy fighting erupted between Armenia and Azerbaijan in late September in the biggest escalation of the decades-old conflict, killing more than 5,600 people on both sides.

The Russia-brokered agreement ended the recent fighting in which the Azerbaijani army routed Armenia’s forces. The cease-fire deal stipulated that Yerevan hand over some areas it held outside Nagorno-Karabakh’s borders. Baku also retained control over the areas of Nagorno-Karabakh that it had taken during the armed conflict.

Another point that experts agreed on was the possibility of new opportunities for joint projects with the participation of all regional actors.

“Both Turkey and Azerbaijan can benefit from the normalization of their relations with Armenia. This also can change the status quo in favor of Turkey in the long-run. Moreover, it is important for Turkey to maintain good relations with Ukraine and Georgia to be more effective over Eurasia, even though some authors in Russia do not enjoy Turkey’s improving relations with Ukraine,” he said.

Ismayıl also underlined that new realities in the region have opened the door for Armenia to join new regional and international projects in the following period. “If they do not choose the wrong policies again, Armenia’s reopening borders with Turkey in the near future can be an important development for the Armenian economy,” he said.

Like others, Dilaver highlighted future opportunities for joint regional projects that can be beneficial for all actors with the participation of Armenia. She warned, however, that such projects can be put into action in the long-term.

Regarding Turkey’s role in the new equation, Dilaver added that these new developments would shape the new realpolitik in the region and Ankara will become an important actor by taking a major role in the establishment of a permanent peace thanks to its bilateral cooperations with both Russia and Azerbaijan.

Turkey’s recent proactive policies in the region led to positive results in the Karabakh conflict, Ismayil said, while underlining Ankara’s diplomatic, military and psychological support to Azerbaijan since the beginning of the war.

While Turkey expanded its role in the Caucasus, Russia will be its main partner for the implementation of stability and security in the region, experts say.

Around 2,000 Russian peacekeepers have been deployed to Nagorno-Karabakh under the terms of the deal and are expected to stay in the region for at least five years. The Turkish Parliament also last month overwhelmingly approved the deployment of Turkish peacekeeping troops to Azerbaijan after Turkey and Russia signed an agreement for establishing a joint center to monitor the cease-fire in the region. The mandate allows Turkish forces to be stationed at a security center for one year. Azerbaijan has been pushing for its close ally Turkey to play a central role in the implementation of the agreement, as Ankara pledged full support for Baku during fighting in the region.

Ismayil noted that the agreement between the Defense Ministries of Turkey and Russia determined the main functions of this center to jointly monitor the implementation of the Karabakh cease-fire deal.

“When we analyze the issue in-depth, it was said following the signing of the deal that the Russian and Turkish troops would come to the region as peacekeepers under equal circumstances, but this has not been put into practice yet. Turkey and Russia will also cooperate for the solution of other regional problems in addition to the Caucasus. This experience was expected to be applied in the Caucasus. During the period following the end of the war, this cooperation will evolve into different dimensions,” he said.

Regarding the cooperation between Turkey, Russia and Azerbaijan in the region, Dilaver said it will open doors for other partnerships.

“A relationship based on realpolitik has been established between Russia and Turkey. As (Russia’s President) Vladimir Putin stated, the two countries have the potential to have discussions at the negotiation table and take steps together, even though they do not share the same opinions on every issue. It can be said this cooperation platform is very important for the resolution of regional issues.”

Turkey and Russia demonstrated they are capable of meeting on common ground and cooperating even in competing regions, Hazır said, adding: “On the other hand, I would like to underline that since the Nagorno-Karabakh war began in 2020, many experts and authors in Russia’s media have discussed Turkey’s rising influence over the region by way of its good relations with Azerbaijan and Ukraine. They have argued that the rising influence of Turkey could undermine Russia’s influence over the region in the long-run.”

“Now, Turkey and Russia are the most significant actors in Southern Caucasus. However, I’d like to underline that Russia is still a hegemonic power in the Caucasus. At his annual press conference this year, Putin underlined that the status of Karabakh should remain unchanged. This means that Russia does not want to change the current status-quo in Karabakh and Russian troops will remain in Karabakh for many years. Russia may want to stay permanently in Karabakh,” he added.

Ismayil also underlined the fact that although Russia seems to be in cooperation with Turkey, it also aims to use this opportunity for its own interests and Moscow is disturbed by the presence of Ankara as a rival actor in the region.

“Countries must determine their strategies accordingly. The fact that Turkey is an emerging power and Russia is a country facing more problems must also be remembered,” he said.

This article originally appeared in DAILY SABAH on 27 Dec 2020.