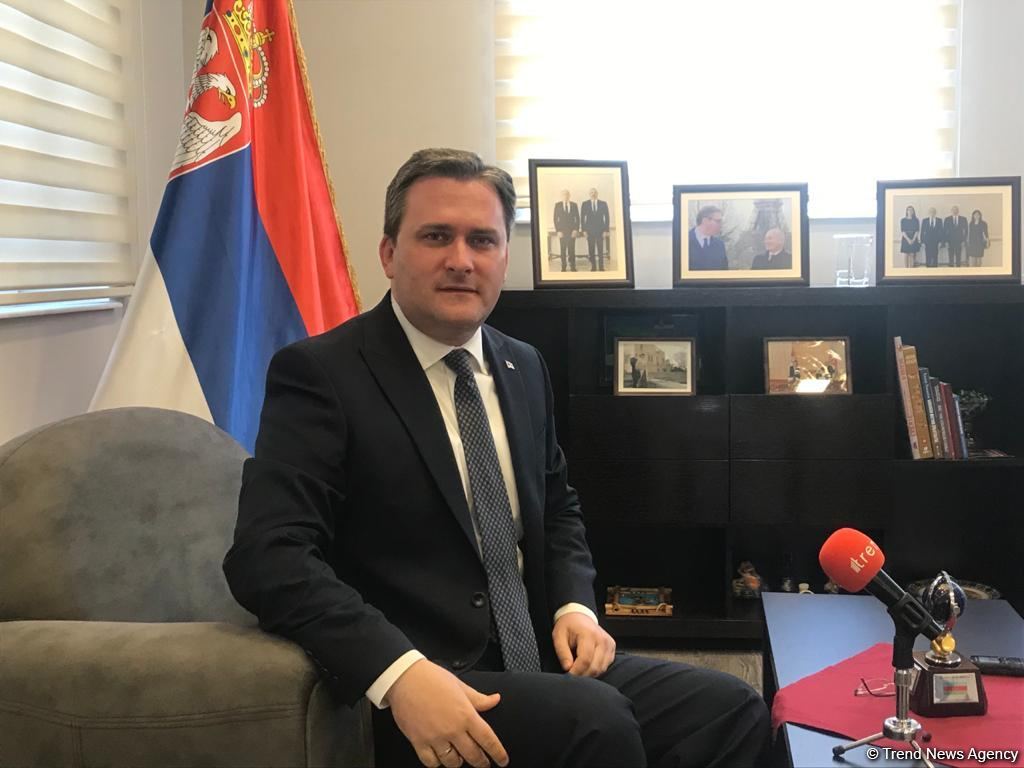 Exclusive interview with Serbian Foreign Minister Nikola Selakovic, who is on a visit to Azerbaijan.

Serbia is paying a lot of attention and is participating in many big projects such as the project of South Stream or Turkish Stream. That’s the gas pipeline connectivity with Russia. But for sure, we’re willing to ensure diversification of gas sources. That’s why we’re going to make the gas inter-connector between Serbia and Bulgaria through which we’re going to be allowed to use also the sources of gas coming via the Southern Gas Corridor from the Caspian Sea region to the Balkans. We’re interested to be a part of this project too and we’re interested in the diversification of sources of energy coming to Serbia. It is really important for the development of our economy. Serbia is number one in the region by the growth of its GDP not just in the region, but also in Europe. We’re the number one in the region for the attraction of foreign direct investments. All foreign investors, especially, those coming from Western Europe, are interested in having a good, sustainable source of gas. The obligation of the Serbian government is to find out and to offer to both citizens and business society, as well as companies the sustainable source of gas.

The first and the best meeting I had during my stay in Azerbaijan was the meeting with President Ilham Aliyev. It was an extraordinarily good meeting. During that meeting, we heard an invitation for our companies to come to your beautiful country and to take part in all the reconstruction projects. We’ve had also the 6th intergovernmental committee for economic and trade exchange and after that a business forum on which some of the best Serbian and most famous Serbian construction companies were presenting their offers and possibilities to participate in all these projects. After meeting Azerbaijan’s Foreign Minister Jeyhun Bayramov, I had a really good meeting with Azerbaijan’s Economy Minister Mikayil Jabbarov. He presented us with all the opportunities for our companies to take a part in the reconstruction projects. I am sure that today, after the business forum, Azerbaijani ministries and companies are going to find out the same language with our companies and their engagement here is going to be mutually beneficial.

During the meetings we had in Baku, we’ve been also speaking about the possibility to offer our experience in de-mining and not only experience by our experts, but also experience of our respective companies from the defence industry, which are offering good equipment for de-mining. It is a long process. It is a process, which is going to last years. You have to be prepared in the best possible way for dealing with this problem and we’re ready to offer you our best experience. I think it is important for your security, for the security of not just of the region, but of the people, because a mine does not recognise whether it is a soldier or a child, it is a woman or a policeman. These are some of the reasons why you have to deal with this properly and as a friendly country, we’re going to be there offering you each type of our aid if you’re interested to have it.

When we’re speaking about transport connectivity between our two countries, first of all, what we have to know is that we’re the two countries that are divided with respectably huge geographical distance. This geographical distance between two countries can be passed by air transport. What we’ve to do in the future – it is one of the conditions for the improvement of our connectivity at all – is to ensure people-to-people connectivity, business-to-business society connectivity and especially development of not only the transport of goods but the transport of people and the development of tourism. I believe that we’ve to establish direct flights between Belgrade and Baku. I am sure that it is going to be a trigger for the future improvement of our relations and cooperation of our two nations. I think that it should be the first step that we have to undertake.

Our trade and economic relations are not following fully our political relations, which are really good. What we have to do much more in the future is to try to improve our trade exchange, economic cooperation and to boost it in the future. At this particular moment the level of our trade exchange, our turnover during the first five months of this year is of about $27 million, which is 55 per cent bigger than it used to be during the last year. So, there is a tendency of growth, but still, there is room to improve it and there are many possibilities between two business societies that are not still used. On one side, we’re having extraordinarily good experience with Azerbaijani construction company Azvirt, which has been working in Serbia on the construction of highway Milos Veliki in central Serbia. They’ve been constructing one really important part of that highway. They’ve completed it and it is extraordinarily well done. Now they are working on the other highway construction between Ruma, Sabac and Loznica and everything they are doing is done in time and with the best quality. What we’ve to do much more is to find enough space for Serbian companies to work in Azerbaijan and as the best success of our economic cooperation, it would be good to have joint ventures between Azerbaijani and Serbian companies.

This article originally appeared in Trend News Agency on 27 July 2021.

BP terminates one of its projects