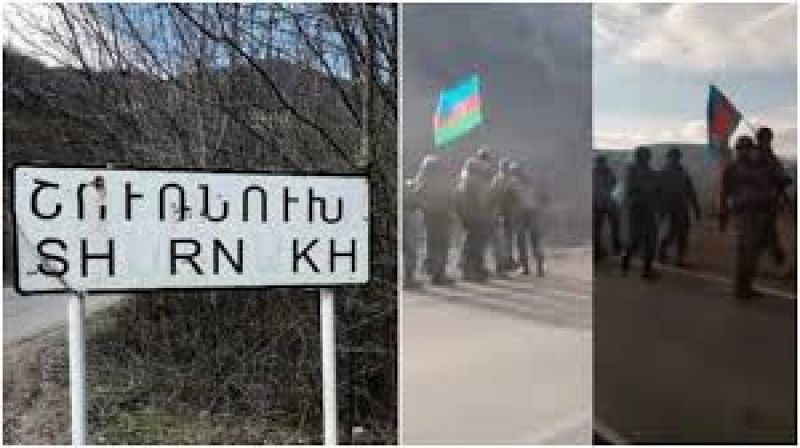 On Significance of Zangezur-Syunik for Azerbaijan and Armenia

The heads of the enlarged rural communities of Vorotan and Shurnukh in the Syunik region of Armenia confirmed that part of these villages, about half, will go to Azerbaijan, according to Azerbaijan in Focus, reporting Turan News.

The head of the Shurnukh community Hakob Arshakyan reported that the Azerbaijanis made a GPS-mark in the village, according to which part of the village, 11 houses, is transferred to Azerbaijan.

“The Turks came and made markings with their GPS, according to which the settlement below goes to them. They set their two points from the beginning to the end of the village and showed that these 11 houses belong to them,” he said, noting that the Turkish (Azerbaijani – Ed.) border guards were with the Armenian National Security Service and Russians.

The head of the Vorotan community, Suren Ohanjanyan, said that some parts of the village, houses and objects are being transferred to Azerbaijan. Demarcation was carried out using GPS. “It has always been our territory, but now we are giving it to the enemy. My brother’s house and facility remain on this territory, and now, without Russian peacekeepers, he cannot approach the house and collect his things. Many people have been gardening in this area, they came from different places a long time ago, and now there is nothing left,” he added.

Armenians are outraged by the fact that the Azerbaijani army, they believe, is resolving controversial issues on the territory of Armenia. “It is quite possible that the Azerbaijani side found maps on which the border was drawn somewhat differently. It would be logical if these issues were clarified by bilateral and trilateral commissions with the obligatory involvement of specialized specialists. However, it turned out that there has recently been no one in Armenia to professionally deal with delimitation. In April 2020, the state non-profit organization Geodesy and Cartography under the Cadastre Committee of Armenia, which was responsible for the creation of topographic maps, was disbanded, and it was also engaged in the demarcation of the borders with Georgia,” Denis Yakovenchuk writes in an analytical study (The Essence of Time newspaper).

Yerevan observers call what is happening in the south of Armenia a part of the Azerbaijani plan to seize the territory of Armenia, which connects this country with Iran. Yerevan is quoting the words of President I. Aliyev, spoken by him at the opening of the Victory Parade in Baku.

In the 90s of the XX century, “hundreds of thousands of Azerbaijanis living in the present Republic of Armenia were expelled from the land of their ancestors.” “Zangezur, Goycha, Irevan are our historical lands. Our people have lived on these lands for centuries, but the leadership of Armenia expelled hundreds of thousands of Azerbaijanis from their native lands at that time, ”the President of Azerbaijan said. Zangezur is the Syunik region, Goycha is Lake Sevan, and Irevan, respectively, is Yerevan.

In 2018, Aliyev also mentioned the Irevan Khanate, Zangezur and Sevan at his pre-election speech in front of his party members.
During the recent hostilities in Nagorno-Karabakh, the head of Azerbaijan has repeatedly stated that there were never any Armenians in Nagorno-Karabakh until the 19th century, and they appeared there only due to the policy of Russia, which, after the conclusion of the Gulistan peace treaty with Persia, began to populate the primordial Azerbaijani lands with Armenians.

At the same time, there is a lot of evidence in Armenian historical literature that Azerbaijanis have long lived in this territory. “By June 1918, the interethnic conflict in Zangezur escalated sharply. At the end of July, General Andranik retreated here from Nakhchivan with his detachment, numbering from three to five thousand people, and 30 thousand Armenian refugees from Turkey. Local Armenian leaders supported Andranik. Arriving in Zangezur, Andranik captured a number of rebellious Muslim villages that controlled important routes linking various districts of Zangezur. The devastation caused by Andranik provoked protests from the Turkish general Khalil Pasha in Erivan, however, the Armenian government stated that the territory of Zangezur, like the entire Elizavetpol province, was under the jurisdiction of Azerbaijan, so it could not do anything…

From mid-April 1919, a struggle began between Armenians and local Muslims, which led to the expulsion of Muslims from central Zangezur to the periphery, to the steppe or Iran (Richard Hovannisian. The Republic of Armenia, 1982).

In addition to historical grounds, Azerbaijan has purely material interests in Zangezur-Syunik – transport and raw materials.
According to the trilateral Statement on a ceasefire in Nagorno-Karabakh on November 10, transport communications in the region will be unblocked and Armenia will provide guarantees for “the security of transport links between the western regions of the Republic of Azerbaijan and the Nakhchivan Autonomous Republic.” In addition, the statement states that “by agreement of the Parties, the construction of new transport communications linking the Nakhchivan Autonomous Republic with the western regions of Azerbaijan will be ensured.” Back in Soviet times, the shortest route (about 40 km) between “continental” Azerbaijan and its exclave, the Nakhchivan Autonomous Republic, passed through the south of Syunik region. The highway and the southern branch of the Trans-Caucasian Railway, which connected Baku, Nakhchivan, Yerevan and Tbilisi, ran along the Araz River bordering with Iran.

With the beginning of the first Karabakh war, the traffic on this section of the road stopped.
The Syunik region is of great geopolitical importance in general and for Armenia itself in particular. Here is the only section of the border with Iran through which, in case of aggravation of relations with Azerbaijan or Turkey, goods can be delivered. Although Armenia borders Georgia in the north, the strong influence of Turkey and Azerbaijan on Georgia makes this border extremely vulnerable.

The Syunik region is rich in its minerals. There are the Kajaran and Agarak copper-molybdenum deposits. The first is the largest molybdenum deposit in the former USSR and one of the largest in the world. In the first half of 2019, the Zangezur Copper-Molybdenum Combine, which develops the mine, became the largest taxpayer in Armenia, transferring about $60 million to the budget. The Kajaran deposit also contains large reserves of gold – about 40 tons, in Armenia, along with the Amulsar deposit, it is the second largest. Taking into account the fact that the new border with Azerbaijan ran directly through the largest in Armenia Sotk gold deposit, the importance of other deposits has increased dramatically.

In Azerbaijan, at the official level, they demand compensation, which Armenia must pay for damage to Karabakh caused by economic activity. The Armenian side is charged with the illegal use of minerals (primarily gold), the illegal construction of hydroelectric power plants, the destruction of infrastructure, buildings, cultural objects, environmental damage, etc.
It is proved that the amount of damage inflicted on Azerbaijan as a result of the occupation of Armenia exceeds 431 billion dollars.

Azerbaijani lawyers believe that, since Armenia will not be able to pay such sums, a court decision on compensation in the form of transferring the territory in Zangezur to Azerbaijan is possible.