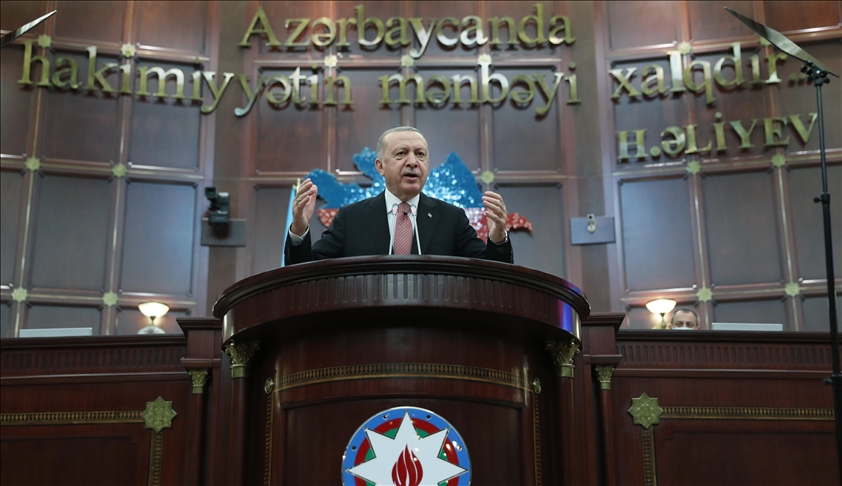 Lasting peace can be achieved through cooperation between all peoples, states in region, says Turkish president

Peace and stability in the Caucasus will benefit the entire world, not just countries of the region, Turkey’s president said on Tuesday.

“Not only Azerbaijan, but all countries in the region, including Armenia, and the world will benefit from peace and tranquility in the Caucasus,” Recep Tayyip Erdogan said in an address to Azerbaijan’s parliament.

All parties must make the best use of opportunities to prevent “a chain of captivity going around the neck of the Caucasus again,” he stressed.

Erdogan added that the road to lasting peace can be paved through cooperation between all peoples and states in the region, and developed based on mutual trust.

Reiterating Turkey’s support for Azerbaijan, he said: “Today, we stand by Azerbaijan with all our means. We will (also) stand with you tomorrow.”

“As Armenia solves its problems with Azerbaijan, we, Turkey, will take the necessary steps. The opening of Turkey’s borders to Armenia will bring innumerable benefits to the country,” he stated.

Underlining that Azerbaijan’s victory in Nagorno-Karabakh last fall – when much of the border region was liberated from Armenian occupation – served the cause of justice, not oppression, Erdogan said this victory also foiled the plans of “those who see the world as the arena of their political and economic ambitions.”

Armenians left the region by destroying or setting houses on fire, Erdogan said, adding that Azerbaijan is now rebuilding the villages together with Turkey.

He said Shusha, which is home to intellectuals who has been influential in the Turkic world with their ideas, has revived with culture and civilization.

On Azerbaijan’s Zangezur corridor project, Erdogan said the project will bring relief and wealth to the region.

“Armenians will also be able to reach Moscow and the world easily by the railroad in the Zangezur corridor, thus avoiding the blockade they imposed on themselves,” he added.

Zangezur was part of Azerbaijan, but in the 1920s, the Soviets gave the region to Armenia. After this move, Azerbaijan lost the link with its exclave of Nakhchivan.

The Turkish president arrived in Azerbaijan on Tuesday on an official visit.

Relations between Armenia and Azerbaijan have been tense since 1991, when the Armenian military occupied Nagorno-Karabakh, also known as Upper Karabakh, a territory internationally recognized as part of Azerbaijan, and seven adjacent regions.

During that time, Azerbaijan liberated several strategic cities and nearly 300 of its settlements and villages from Armenian occupation. On Nov. 10 the two countries signed the peace deal to end fighting and work toward a comprehensive resolution.

This article originally appeared in Anadolu Agency on 16 June 2021.

On the night from Saturday to Sunday, armed clashes between protesters and security forces continued in a dozen large settlements in the north and northwest ... Read More

The person who left the bomb that caused the explosion on Istanbul’s Istiklal Avenue has been arrested, Interior Minister Suleyman Soylu said early Monday, according ... Read More