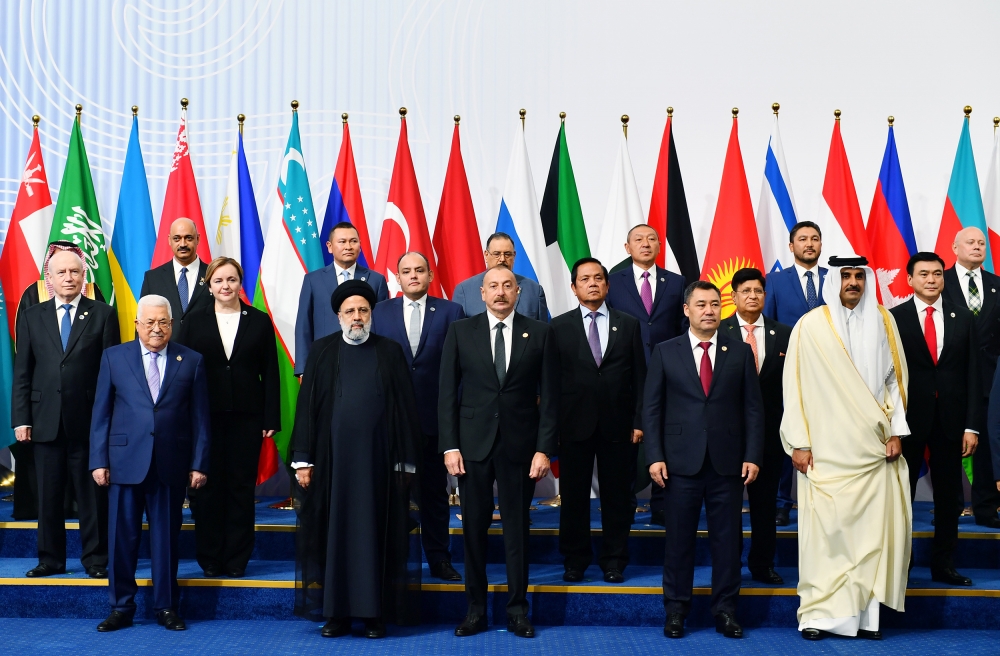 A plenary session of the 6th Summit of the Conference on Interaction and Confidence Building Measures in Asia has kicked off in Astana, according to Azerbaijan in Focus, reporting AzerTac.

President of the Republic of Azerbaijan Ilham Aliyev is attending the event.

The heads of state and government posed together for a group photo.

President Ilham Aliyev made a speech at the plenary session.

First of all, I would like to thank President of Kazakhstan, Kassym-Jomart Tokayev for his invitation to the 6th CICA Summit and for hospitality.

During President Tokayev’s recent successful official visit to Azerbaijan we had fruitful discussions on current issues of the bilateral agenda.

Azerbaijan supports the political and socio-economic reforms in Kazakhstan under the leadership of President Tokayev.

As a result of the victory gained in the Second Karabakh war, 2 years ago Azerbaijan liberated its territories from the occupation of Armenia, put an end to the three-decades-long Karabakh conflict, ensured justice and itself, enforced the implementation of the 4 UN Security Council resolutions adopted in 1993, demanding unconditional withdrawal of Armenian armed forces from Azerbaijan’s occupied territories.

Our cities and villages, cultural and religious monuments, mosques have been purposefully destroyed, desecrated and plundered throughout almost 30-year occupation by Armenia. Even mosques were used as stables for keeping animals.

Unfortunately, during three decades, we never heard any opposition from Armenian society to such vandalism, vice versa, this destruction and Armenian vandals, war criminals were even glorified and presented as heroes.

Armenia committed systematic war crimes against Azerbaijani civilians and military personnel. Around 3900 Azerbaijani citizens still remain missing since the First Karabakh War. Most of them have been tortured, killed and buried in mass graves. This year, we discovered mass graves in two liberated villages.

Armenia has to provide Azerbaijan with information about the fate of missing persons and exact locations of mass graves. We demand this information for almost 2 years, but Armenian Government refuses to share it with Azerbaijan thus associating itself with criminal leaders of previous Armenian regimes.

Azerbaijan is among one of the most mine-contaminated countries in the world. According to initial estimations, during the times of occupation, Armenia planted more than one million landmines. During 2 years after the Second Karabakh War, more than 250 Azerbaijani citizens were killed or severely injured as a result of landmine explosions. International experts estimate that Azerbaijan needs nearly 30 years and 25 billion US dollars to solve issues related to demining.

Now, in parallel with mine clearance operations, Azerbaijan with its own financial resources, undertakes a large-scale reconstruction works in the liberated areas. We have also begun the return process of the former internally displaced persons back to their native lands. The program called “Great Return” has started.

Despite the resolution of the Karabakh conflict, Armenia continues its provocations at the border, the latest of which was committed this September. Azerbaijani Armed Forces had to take resolute counter-action to repel the military provocation of Armenia. All responsibility for such provocations lies with the military-political leadership of Armenia.

Despite the three-decades-long suffering of more than 1 million of Azerbaijanis ethnically cleansed by Armenia from their native lands, despite unprecedented barbarism, destruction of hundreds of our cities and villages, Azerbaijan offered Armenia to sign a peace treaty based on mutual recognition of each other’s territorial integrity.

Large-scale transportation infrastructure projects implemented by Azerbaijan transformed our country into one of the important international transportation and logistics hubs. In the first 9 months of 2022, the transit through Azerbaijan increased by nearly 65 %.

Azerbaijan makes significant contribution to the development of the East-West and North-South transportation corridors. Azerbaijan actively promotes the creation of the Zangezur Corridor, which will be an integral part of the Middle Corridor.

Since 2019 Azerbaijan is chairing, by unanimous decision of Member States, the Non-Aligned Movement, the second largest international structure after the UN. Our chairmanship was unanimously prolonged for one more year until the end of 2023.

We are making huge efforts to strengthen the solidarity within the NAM and to increase the Movement’s political weight and global visibility. Azerbaijan actively promotes the idea of NAM’s institutionalization to this end. In this context, it is worth mentioning the NAM Parliamentarian Network and the NAM Youth Organization, established by the initiatives of Azerbaijan. We also suggested to convene next year a high-level meeting of the NAM Member States to exchange views and formulate the position of the Movement concerning the post-COVID-19 world.