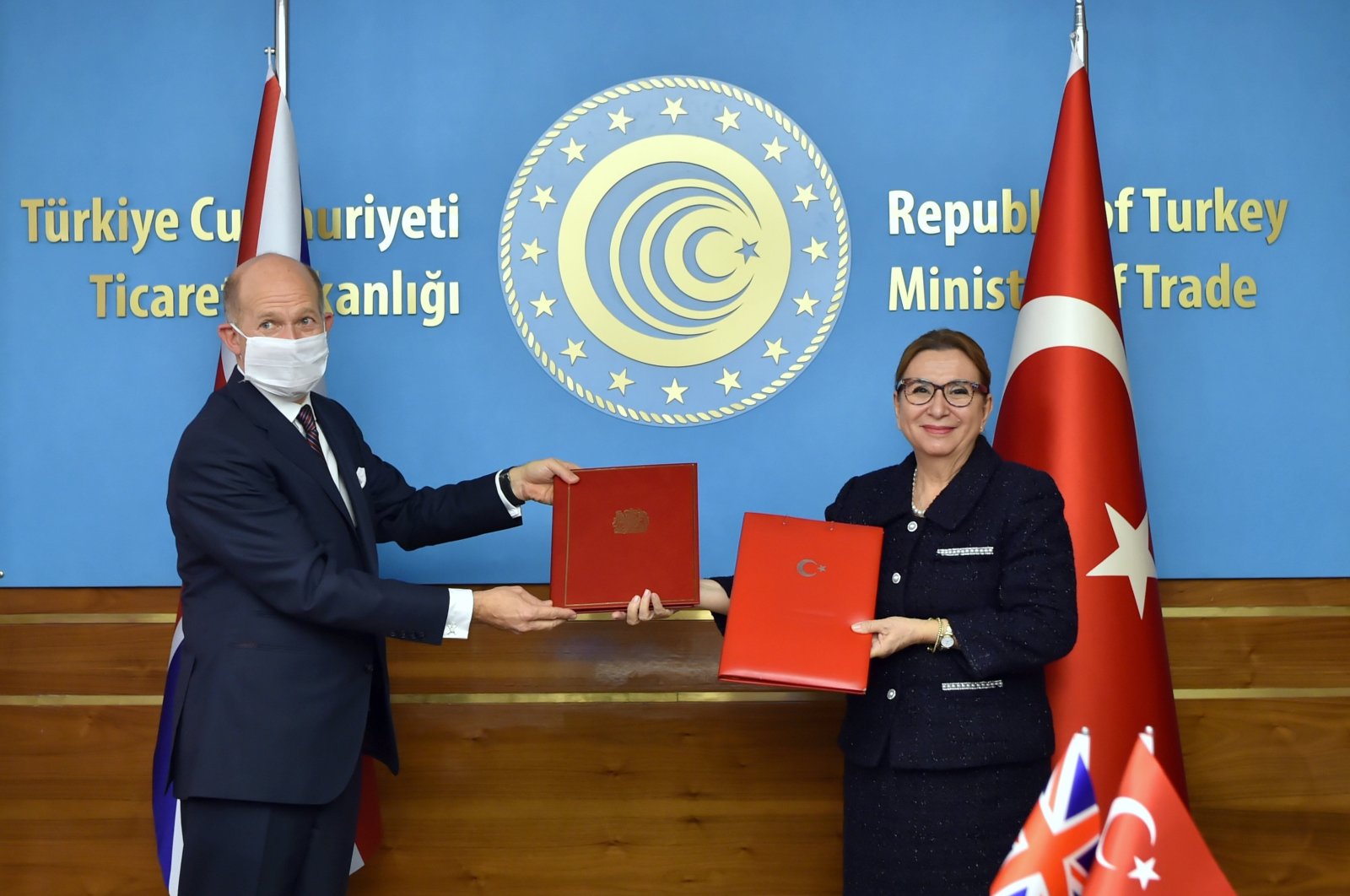 Trade Minister Ruhsar Pekcan (R) and the U.K.'s Ambassador to Ankara Dominick Chilcott are seen on the sidelines of the signing ceremony of the Turkey-U.K. free trade agreement in the capital Ankara, Turkey, Dec. 29, 2020. (AA Photo)

Brexit may create fresh opportunities for the foundation of a strategic partnership between Turkey and the U.K., experts say, also noting the possible impact of the new status quo on Ankara-Brussels ties.

As the United Kingdom’s long and sometimes acrimonious divorce from the European Union completely finalized on the first day of 2021 with an economic split, bilateral relations between Turkey and Britain have entered a new period defined by opportunities and uncertainties. While some experts underline the prospects for a new strategic partnership between the two countries in the following period, other analyses are not that eager to draw such early optimistic conclusions.

Speaking to Daily Sabah, Tarık Oğuzlu, an academic from Antalya Bilim University, said that the relations between Turkey, long alienated by the EU, and the U.K., now formally a third country from the perspective of the bloc just like Turkey, are set to improve as a strategic partnership.

“Actually, before the U.K. left the EU, especially during the period following the failed coup attempt in Turkey in 2016, bilateral relations between the two countries were starting to drag into the strategic ground. The U.K. had started to act like a European country that supports Turkey and understands its unique sensibilities and concerns,” he said.

Stating that this is also a very compatible concept with Turkey’s recent multidimensional autonomous foreign policy and the U.K.’s post-Brexit foreign policy strategies, Oğuzlu added: “The U.K. has also supported, or at least not opposed, Turkey’s role in many international arenas such as Syria, Libya and Karabakh, unlike other major Western powers.”

Ayhan Zeytinoğlu, the chairperson of the Economic Development Foundation (IKV), confirmed that it is very possible for Ankara and London to develop a special relationship in the post-Brexit period, saying that the free trade agreement (FTA) signed between the two countries and the more comprehensive trade and economic ties built on this deal will be its backbone.

During the last days of 2020, Turkey and the U.K. signed a free trade deal to keep up the existing flow of goods. “This is a historic day for Turkey-U.K. relations,” Turkish Trade Minister Rushar Pekcan said just before she signed the agreement with her British counterpart in a televised videoconference call. The landmark deal was described as Turkey’s most important trade agreement since its 1995 customs union with the EU that allows goods to travel between the two entities without customs restrictions.

“There is also strong cooperation in the defense industry. The inclusion of the automotive, white goods and textile sectors in the FTA’s scope would deepen economic cooperation. Also, we see that the U.K. has adopted a balanced and moderate approach to Turkey in the field of politics. There are sensitive issues that concern both sides, like military bases on the island of Cyprus. NATO membership is another unifying factor,” Zeytinoğlu explained.

Ali Faik Demir, an academic from Galatasaray University, also said that the economic dimension of their bilateral relations has gained more importance during the post-Brexit period.

“The U.K. is strategically a very important country for Turkey in terms of economics. If we need to explain this situation with statistics, 2019 was actually a bad year as the trade volume between the two countries dropped by 12%. Despite this decline, the U.K. ranked second among the countries Turkey exported to the most and ranked ninth among the countries Turkey imported from the most. In addition to being Turkey’s sixth biggest trade partner, the U.K. is also a critical financial actor with its nearly $11 billion (TL 76.60 billion) investment stock in the country.”

Demir also noted that London signed its fifth-largest trade agreement with Turkey during this period, underlining that concerns about post-Brexit uncertainty transitioned into new opportunities and improvements following the signing of the deal.

“Considering the U.K.’s experience in the fields of investment and finance and Turkey’s experience in the fields of agriculture, manufacturing and textile, the economic cooperation between the two countries can reach new levels, especially if they can cooperate in promising regions such as Africa, Central Asia, Latin America and South Asia,” he said.

On the other hand, Ipek Tekdemir, a political adviser based in Brussels, is reluctant to offer such a positive outlook based only on strategic partnerships and closer cooperation.

“The difference between Brexit Britain and Turkey at the moment is that while Turkey still wants more integration with the European Union, for example, customs union modernization and therefore extension to services, agriculture and other sectors, Britain is moving in the opposite direction. It has exited the single market; it has exited the customs union and only the free movement of goods has been agreed upon,” she said.

Tekdemir added that while London wants less integration and Ankara wants more, Turkey with the customs union is now already more integrated into the EU than Britain, at least regarding goods.

“Therefore, a strategic partnership regarding trade and goods is not really possible.”

“In military terms, there is no change because they are both in NATO. The only possibility for Turkey is to attract business from the U.K., which wants to sell goods in the EU single market. Given that the advice of the U.K. Department of (International) Trade to its own U.K. companies is to establish branches on the continent, Turkey could jump into this void in order to attract this investment,” she said.

The U.K. had also been one of the biggest supporters for EU enlargement, including the addition of Turkey as a member. One major question for Ankara posed by Brexit is how it will affect Turkey’s integration and accession process to the bloc.

Turkey has an extended history with the union and has been working through its longest negotiation process. The country signed an association agreement with the EU’s predecessor, the European Economic Community (EEC), in 1963, which is usually regarded as a first step to eventually become a candidate. Applying for official candidacy in 1987, Turkey had to wait until 1999 to be granted the status of a candidate country. For the start of the negotiations, however, Turkey had to wait for another six years, until 2005, a uniquely long process compared to other candidates.

On top of the slow negotiations, another challenge that threatened Turkey’s ascension into the union was the 2016 Gülenist Terror Group’s (FETÖ) attempted coup that forced the country to declare a state of emergency. Unhappy with the move, the European Parliament on Nov. 24, 2016, stated that it would temporarily “freeze” the talks, which has kept the process at a standstill ever since.

Zeytinoğlu noted that despite the U.K. supporting Turkey’s membership, its efforts were not enough to change the result in practice, while France and Germany’s approaches were more decisive.

“Considering the loss of a member that has a global vision and gave importance to relations with Turkey, Brexit will impact the future of Turkey-EU relations. However, a more indirect impact will be important, too. The U.K. was against the deepening in the union while it was a member. It tended to see the EU as a single market. After Brexit, France especially increased its influence over the establishment of a deeper EU. As long as it can coordinate with and convince Germany, we will see a more integrated Europe as happened in the case of the post-pandemic rescue fund. This may make things harder for Turkey’s relations with the EU in terms of both the accord with common values and from the perspective of membership,” he said.

Similarly, Demir explained that the U.K. leaving the EU can be evaluated as a loss for Turkey, considering the country was in a sensitive and valuable position in the bloc for Ankara.

“However, a non-EU member U.K. can be a partner of Turkey in the solution of regional problems. From the perspective of the EU, the possibility of closer Turkey-U.K. ties in economic and political fields has already drawn reactions and criticism. The U.K.’s Mediterranean, Africa, Caucasus and Middle East policies will be more important for Turkey after this point,” he said.

Evaluating the question from two different angles, Oğuzlu said that Brexit does not bear any significance for Turkey’s accession process because Turkey’s membership in the EU seems impossible for now.

“Independently from Turkey’s integration and accession process, the U.K.’s support as an efficient third party world power, however, can positively affect Turkey’s relations with the bloc,” he said, underlining that in addition to its role as the major trans-Atlantic bridge between the U.S. and Europe, the U.K. could be a link between the bloc and Ankara.

On the other hand, Tekdemir said that the big difference between other continental European countries and the U.K. was that members of the bloc, most of them at least, prioritize the political unity of the EU.

“Meaning that you have to agree and you have to come to an agreement on the basic values of the EU and you have to bring this together. Therefore, countries like France’s entry extend at least critically to the Netherlands. Luxembourg viewed the accession of Turkey as possible as long as Turkey’s alliance came with the same political values. The U.K. never cared much about political values because it viewed the EU mostly as a market and trade organization and was less interested in the political union, which ultimately led to Brexit.”

In the new configuration of the EU without the U.K., the emphasis on political unity will be stronger, and it will be more difficult for Turkey in its current configuration to find advocates for its integration for full membership, she said.

This article originally appeared in DAILY SABAH on 21 Feb 2021.