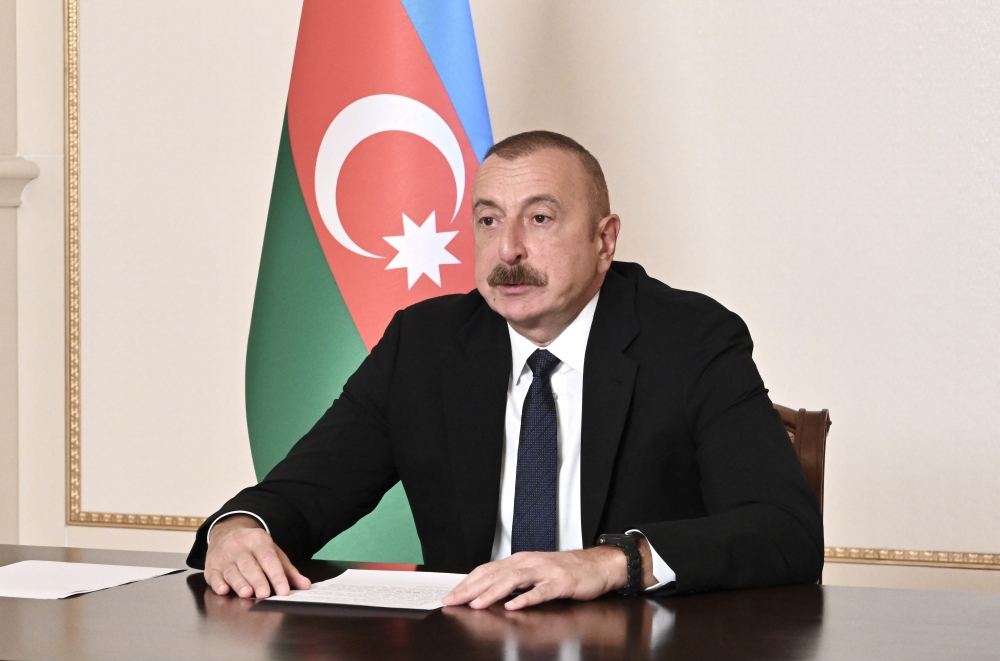 According to Azerbaijan in Focus, reporting Trend News, the seventy-seventh session of the United Nations Economic and Social Commission for Asia and the Pacific (ESCAP) has today got underway virtually at the organization’s headquarters in Thailand under the theme “Building back better from crises through regional cooperation in Asia and the Pacific.”

A speech by the President of the Republic of Azerbaijan Ilham Aliyev was presented in a video format at the Ministerial Segment of the session for Asia and the Pacific region.

Speech by Ilham Aliyev, President of the Republic of Azerbaijan.

Distinguished Under-Secretary-General of the United Nations,

First of all, I would like to express gratitude for the invitation to address the 77th Session of the United Nations Economic and Social Commission for Asia and the Pacific. Azerbaijan attaches great importance to its relations with countries from Asia and the Pacific.

COVID-19 pandemic exposed the world countries to new challenges. The Government of Azerbaijan has taken necessary steps in countering pandemics from the beginning. In order to mitigate the impact of coronavirus on the economy, support business, and ensure macroeconomic and fiscal stability a solid socio-economic stimulus package has been released.

We launched a vaccination campaign in January. Close to 1,4 million vaccine doses have already been used. It constitutes 14 percent of our total population.
However, the efforts taken on the national level only are not enough to successfully eliminate pandemics.

Azerbaijan is at the forefront of the efforts to mobilize global action against the pandemic. As a chair of the Non-Aligned Movement, Azerbaijan initiated and successfully held the NAM Summit in response to coronavirus in May 2020. The Special Session of the UN General Assembly at the level of the heads of state and government was held on our initiative last December.

We are deeply concerned by “vaccine nationalism” and the unfair distribution of vaccines among developing and developed countries. More than 30 rich countries ordered 53 percent of the world’s supply of vaccines.
Azerbaijan as a chair of the NAM and in its national capacity will continue its struggle for the just distribution of vaccines worldwide as well as access of developing and least developed countries to vaccines.
Recently, the Human Rights Council unanimously adopted the resolution on equitable access for all countries to vaccines, put forward by Azerbaijan, on behalf of the Non-Aligned Movement.

Azerbaijan provided humanitarian and financial assistance to more than 30 countries in relation to coronavirus, most of which are least developed countries.

Last year Azerbaijan put an end to nearly 30 years of occupation by Armenia of almost 20 percent of its territories. As a result of the occupation and ethnic cleansing policy of Armenia, more than 1 million Azerbaijanis were expelled from their native lands. In 1992 Armenia committed the Khojaly genocide killing 613 innocent civilians, including women and children. The Khojaly genocide has been recognized by 13 states.

Instead, Armenian military-political leadership was threatening Azerbaijan with a “new war for new territories”. In July 2020 Armenia perpetrated military provocation along the state border. In August Armenian sabotage group attempted to penetrate through the Line of Contact.

On September 27th Armenia launched large-scale military aggression against Azerbaijan heavily shelling the military and civilian populations. Azerbaijan was compelled to launch counter-offensive operations to defend its citizens. Azerbaijan implemented Security Council resolutions and norms and principles of international law itself and restored historical justice and its territorial integrity.
During 44 days of the Patriotic War, the armed forces of Armenia were totally destroyed. Armenia was forced to sign the act of capitulation on 10 November 2020.
Thus, the Armenia-Azerbaijan conflict is over. The conflict was left in the past.

All Azerbaijani cities and villages have been razed to the ground by Armenia during the occupation. Aghdam city is called “Hiroshima of Caucasus” by foreign experts. Armenia deliberately vandalized, desecrated, and pillaged our cultural and religious sites. More than 60 mosques were destroyed by Armenia. Mosques were turned into cowshed and pigsty.
Now there is a huge task before us – reconstruction of completely destroyed cities and villages, all cultural and religious heritage sites in the liberated territories. Smart cities, smart villages, and green energy concepts will be applied in the process of reconstruction. I invite companies from friendly countries to join the large-scale reconstruction in the liberated territories, the size of which is 4 times larger than Luxemburg.

Recently, I defined national priorities on socio-economic development for the next ten years. Competitive human capital and space for modern innovations, return to the liberated territories, clean environment, and “green growth” country was identified as our key priorities.

Azerbaijan is eager to maintain sustainable peace and security in the region. Azerbaijan has made an enormous contribution to the launch of regional connectivity projects such as East-West, North-South, North-West transportation corridors.

We are now working on the realization of the “Zangazur transportation corridor”, which will be an integral part of the East-West corridor connecting Asia and Europe through Azerbaijan. This corridor will allow Azerbaijan to strengthen its position as Eurasia’s transport and logistic hub. I invite partner countries from Asia and the Pacific to consider the potential of this regional project.

Thank you for your attention.