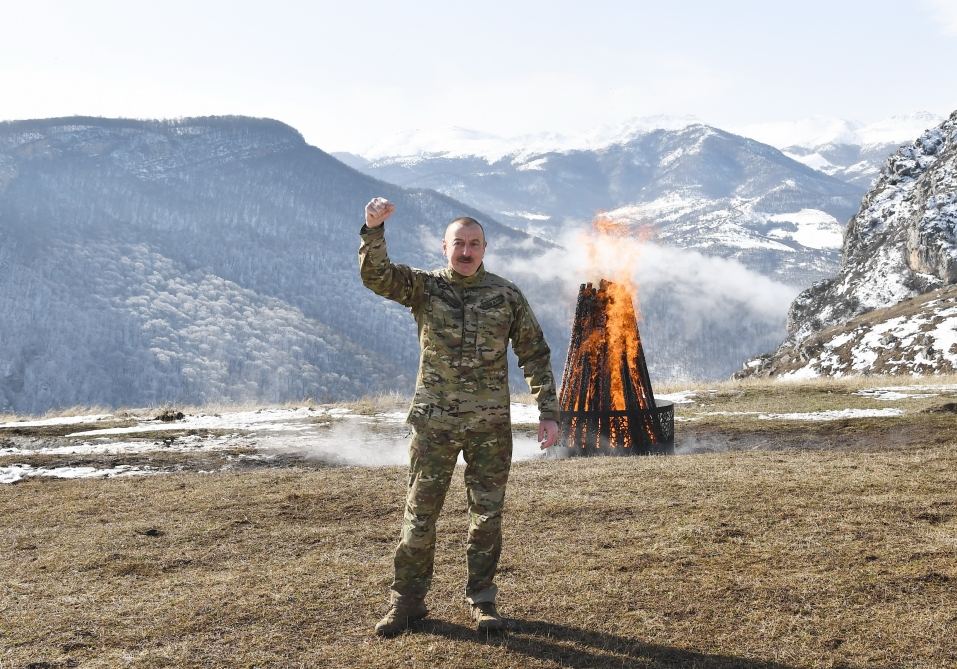 President Aliyev On Liberation Of Shusha City: We Fought With Light Weapons, Pistols and Bayonets

“Our servicemen came to Shusha with light weapons, climbing steep rocks, crossing ravines and hills, Khojavand forests and paths. We fought with light weapons, pistols and bayonets,” President of the Republic of Azerbaijan Ilham Aliyev said addressing the nation from Jidir Duzu, Shusha, on occasion of Novruz holiday, according to Azerbaijan in Focus, reporting Trend News.

“We have created a strong army. We have created a professional army. We have created a heroic army. Our servicemen deserve the highest praise. We had martyrs during the war. May God have mercy on all our martyrs. May God grant patience to their relatives. We liberated Shusha by shedding blood. There were fierce battles for Shusha. The remains of the invaders were scattered along the Lachin corridor. Hundreds, perhaps even thousands of invaders were killed in the battles for Shusha. Our servicemen came to Shusha with light weapons, climbing steep rocks, crossing ravines and hills, Khojavand forests and paths. We fought with light weapons, pistols and bayonets. Cannons and tanks were used against us here. But the enemy saw our strength, saw our will, saw our national spirit, and was defeated. The liberation of Shusha is a special event in the Patriotic War. Shusha was our goal and we were moving towards it.

“The presence of the Azerbaijani Army in all the liberated lands before Shusha also conditioned the liberation of Shusha. Jabrayil district, Sugovushan, Hadrut, most of Khojavand district, Zangilan, Fuzuli, Gubadli districts, the southern part of Lachin district, Kalbajar mountains, Murov mountain and then Shusha. During the war, more than 300 villages and towns were liberated. The enemy was brought to its knees, surrendered and signed an act of capitulation on 10 November,” the head of state said.

President of the Republic of Azerbaijan Ilham Aliyev has visited Oghuz district, according to Azerbaijan in Focus, reporting AzerTac. The head of state visited a ... Read More

President of the Republic of Azerbaijan Ilham Aliyev, First Lady Mehriban Aliyeva and their daughter Leyla Aliyeva visited the Shaki district on December 2, according ... Read More

An event marking the 160th anniversary of the establishment of one of the military units of Azerbaijan’s Naval Forces has been held, according to Azerbaijan ... Read More