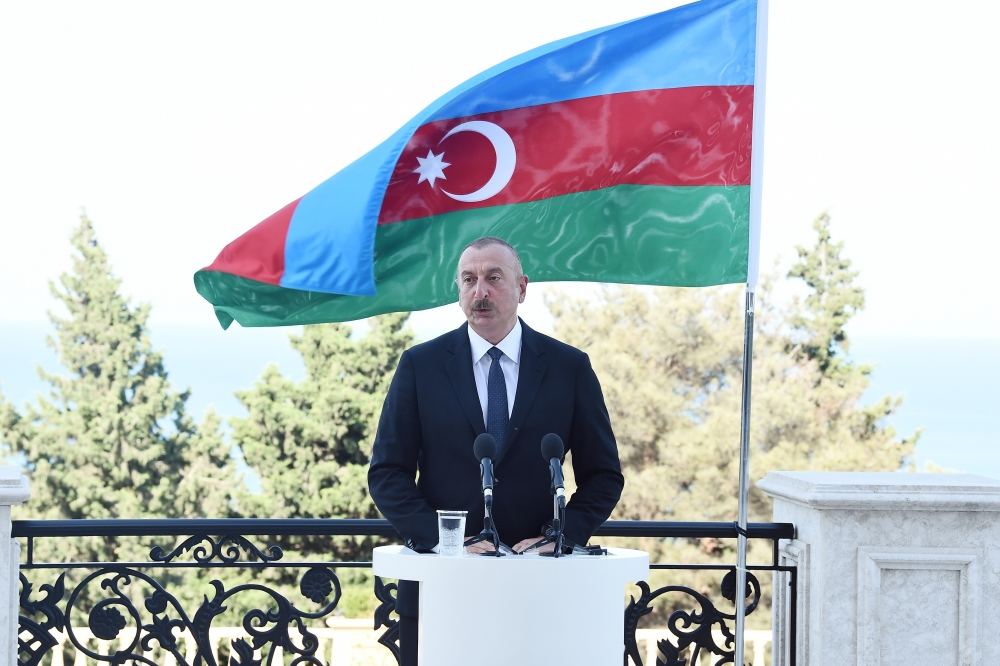 President Aliyev: Stability and security in region will become reality

Stability and security in the region will become a reality, President of the Republic of Azerbaijan Ilham Aliyev said during a joint press conference with President of the European Council Charles Michel, according to Azerbaijan in Focus, reporting Trend News.

“The opening of all communications is an important issue in the post-conflict settlement, and this is reflected in the trilateral statement signed by the President of Russia, the Prime Minister of Armenia and myself on 10 November last year. The existing modern infrastructure and transport will allow Azerbaijan the opportunity to implement projects in our territories in a relatively short time because we already have a diversified transport network today. Azerbaijan is a landlocked country. Nevertheless, we have managed to create one of the most important transport and logistical hubs in Eurasia. Together with our neighbours, we have completed the construction of the Baku-Tbilisi-Kars railway, which was opened in 2017 and made a significant contribution to the East-West transport corridor. At the same time, we have invested in the creation of the North-South transport corridor in Azerbaijan. I can tell you that I have recently been informed that the first cargo from Finland to India was delivered across the territory of Azerbaijan. Undoubtedly, the volume of cargo to be transported through Azerbaijan via both East-West and North-South transport corridors will increase. Because we have established good bilateral relations with all our neighbours and countries in the region. In addition, political and economic stability in Azerbaijan helps us.

“We also have the largest fleet in the Caspian region. This allows us the opportunity to increase the transportation of goods from East to West and vice versa. We recently inaugurated the Alat International Trade Seaport, which has a carrying capacity of 10 million tons and the potential to increase to 25 million tons. This is one of the most important elements of our logistical and transport network.

“Modern highways – by the way, according to the Davos World Economic Forum, the quality of roads in Azerbaijan ranks 24th in the world. We are 11th in terms of railway services and 12th in terms of air services. This shows that we have invested heavily in infrastructure. Of course, the opening of all communications in the region will enable Azerbaijan to have unimpeded access to
the Nakhchivan Autonomous Republic, which is an integral part of it, through the territory of Armenia. At the same time, the construction of railways to the Armenian border has begun. The construction of a highway to the Armenian border has also begun. We must build more than 100 kilometres of highways and railways in our territory to the territory of Armenia. In the territory of Armenia, it is only about 40 kilometres. All communications in the region must be opened in parallel. This will allow Armenia the opportunity to have a railway connection with Russia and Iran.

This gives Azerbaijan additional access to the Nakhchivan Autonomous Republic, and four countries of the region – Azerbaijan, Iran, Russia and Turkey – strongly support this approach. Thus, we must receive a positive response from Armenia, but this response should not be selective. As I said, all communications must be opened at the same time and there should be no discrimination in this regard. Of course, from now on predictability, stability and security in the region will become a reality. This is what we want,” the head of state said.