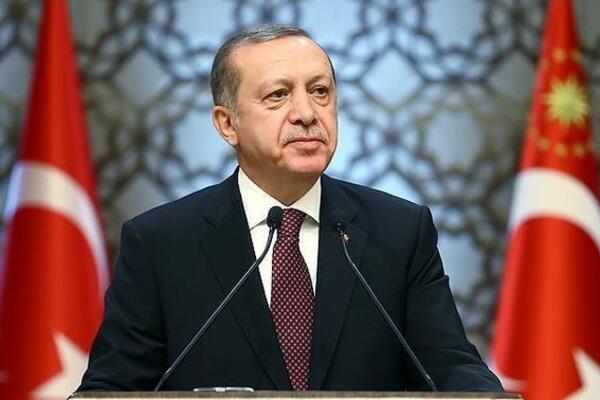 President Erdoğan pledges 2021 to be year of reforms

President Recep Tayyip Erdoğan pledged or Dec. 31 to make 2021 a year of reforms saying that the government is in preparation to take steps to polish up the country’s democracy and strengthen its economy in the new year.

“We are in the preparations for reforms that will strengthen our economy and raise the bar of our democracy, rights, and freedoms. Hopefully, with the new year, we will present our comprehensive reform programs, for which we have made the last arrangements, to the discretion of our nation,” the president said in his New Year message on Dec. 31.

The government has brought many investments to Turkey in a wide range such as the defense industry, culture, and arts, agriculture, foreign trade, transportation, and energy, Erdoğan said in a written statement.

“We see the 6.7 percent growth rate we achieved in the third quarter as a sign of both our efforts, the success of our country in this process, and the strong potential in the new period,” he stated.

The president made a call on to the public for compliance with measures against the novel coronavirus on New Year’s Eve as the world continues to grapple with the pandemic. “I want every member of my nation to support the fight to overcome the pandemic by following the rules, especially on New Year’s Eve,” Erdoğan noted.

Noting that the pandemic was likely to continue for some more time, Erdoğan said: “We are preparing our country for this uncertain future by attaching importance to efforts for vaccine supply.”

On Turkey’s efforts to support its economy during the pandemic, Erdoğan said the size of all stimulus packages that the country had enacted since the beginning of the outbreak had reached 10 percent of the national income.

CHP leader: 2021 to be year of humility, tolerance, togetherness

In his new year message, main opposition Republican People’s Party (CHP) leader Kemal Kılıçdaroğlu said he believes 2021 will be the year of humility, tolerance and togetherness, in which hopes will spring again.

“It will be the year of those who demand justice not only for themselves but also for everyone, those who resist oppression, defend democracy, workers, housewives, apartment workers, shopkeepers and producers,” he said in a statement.

His wish is to ensure that Turkey’s youth, who are free of ideas, wisdom and conscience, can look to the future with hope in 2021, the CHP leader said.

“We will be the ones who will foster that hope. In 2021, we will be one step closer to our promise to this nation, and we will take one more step towards the day when we will crown our republic with democracy. For this reason, despair does not suit us, those who defend democracy,” Kılıçdaroğlu stated.

Nationalist Movement Party (MHP) leader Devlet Bahçeli said Turkey was capable of its rise despite the negative consequences of the pandemic.

“Despite all the negativity, Turkey has preserved the spirit of revival and steady growth. For instance, it showed admirable resistance, an uphill battle against the disease COVID-19,” he tweeted.

Recalling a debate for the possibility of release of the former co-chair of Peoples’ Democratic Party (HDP), Selahattin Demirtaş, who is jailed since 2016, Bahçeli said, “The idiosyncratic strangers, who say that a terrorist will be taken out of prison where he is jailed, have lost in national hearts even if they speeded up their provocations in 2020.”

This article originally appeared in Hurriyet Daily News on 31 Dec 2020.