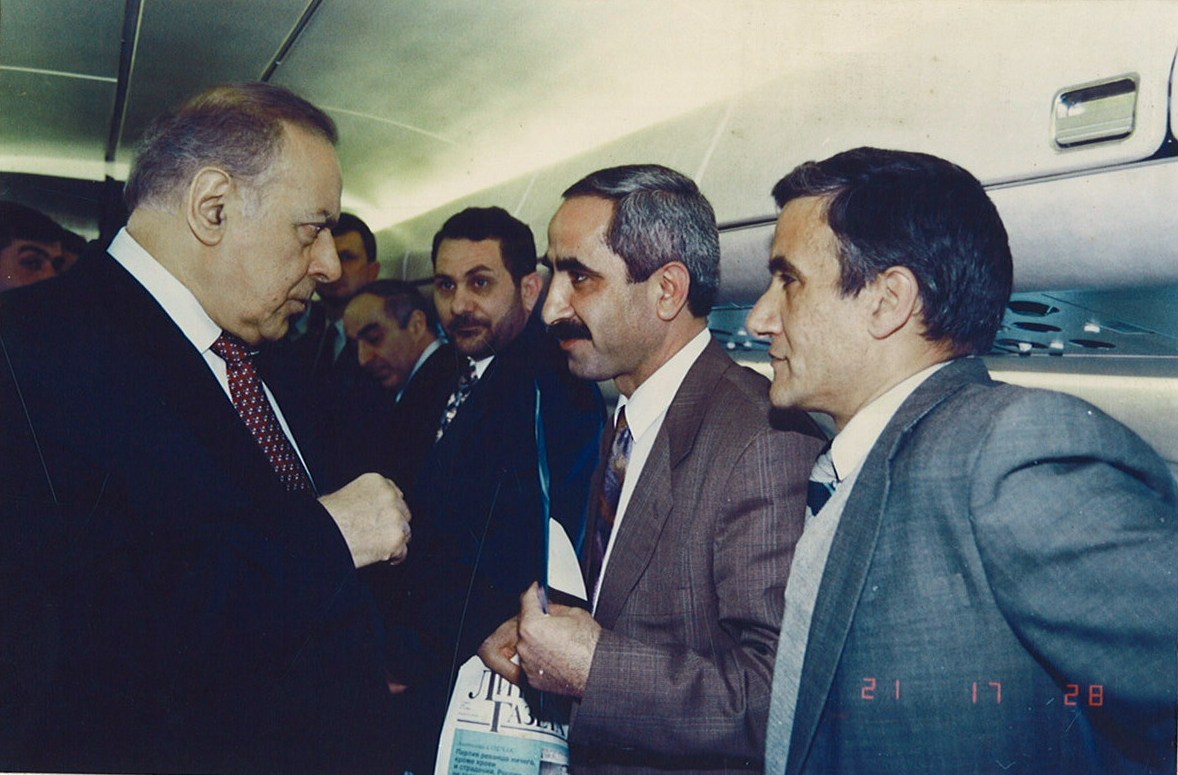 The collapse of the Soviet Union in 1991 led to challenging times in the early years of Azerbaijan’s independence. The country was unstable and fragile with various crises, the economy was in decline, and the war in Karabakh tore the nation apart. But Azerbaijan’s rich natural resources and important strategic location between East and West, has always made the country significant and attractive for the great powers. The competition for influence between the great powers, especially the pressure from some political circles in neighboring countries, required building a balance between the interests of global powers and powerful neighbors.

During these tough times, in 1993, Heydar Aliyev, who had once been one of the most influential leaders of the Soviet Union and had wealth of political experience, returned to the political arena and introduced a pragmatic foreign policy. It meant building constructive relations with powers like the USA and EU, as well as wise partnerships with actors like Russia and Iran, thus balancing the relations with major global and regional powers. Azerbaijan’s multi-vector policy became a state strategy, avoiding allying with any geopolitical bloc but opting for economic, energy, and military cooperation with both sides. Heydar Aliyev had a clear vision regarding relations with the main actors and, despite the crisis the country was experiencing, Azerbaijan signed the “Contract of the Century” with foreign oil companies to develop the Azeri-Chirag-Gunashli (ACG) fields in the Caspian Sea in September 1994. It was an unprecedented multi-billion-dollar production-sharing agreement and, the first and largest contract of its type ever signed in the former Soviet Union.

On November 7, 1997, the first oil was produced from the Chiraq platform. The Government of Azerbaijan and the Azerbaijan International Operating Company (AIOC) marked the start of oil production from the offshore Chirag field on 12 November. Numerous foreign dignitaries, including US Secretary of Energy Federico Pena, Russian First Deputy Prime Minister Boris Nemtsov, President of Georgia Eduard Shevardnadze, and Prime Minister Mesut Yilmaz of Turkey, attended the celebrations. 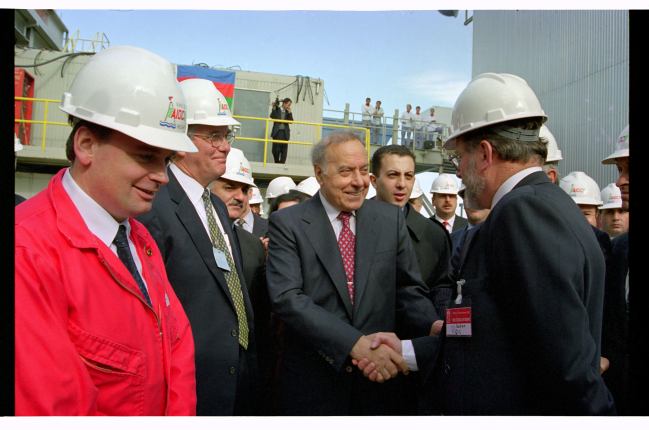 Looking back on the event, November 12 was really President Heydar Aliyev’s Day. He was the one who had had the vision to see the benefit that oil developments would bring to Azerbaijan. Chirag’s first oil was the embodiment of his vision. And the results followed when Azerbaijan’s economy recorded the fastest growth in the world. 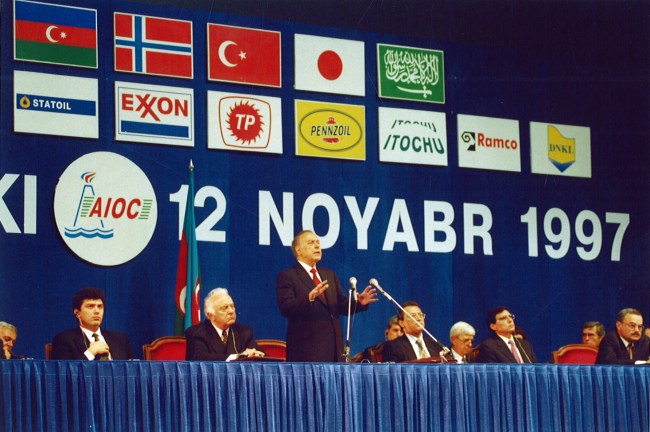 At the ceremony of the first oil celebration held at the Republic Palace, President of AIOC and BP representative Terry Adams presented Heydar Aliyev, the President of Azerbaijan, with a botanical drawing of a variety of rose registered in his name at the International Rose Association:

“This rose, Mr. President, from this day forth, will be known around the world as the “President Heydar Aliyev Rose of Peace” and will also be flourished in the national botanical gardens in each of the countries represented in the AIOC oil consortium.” 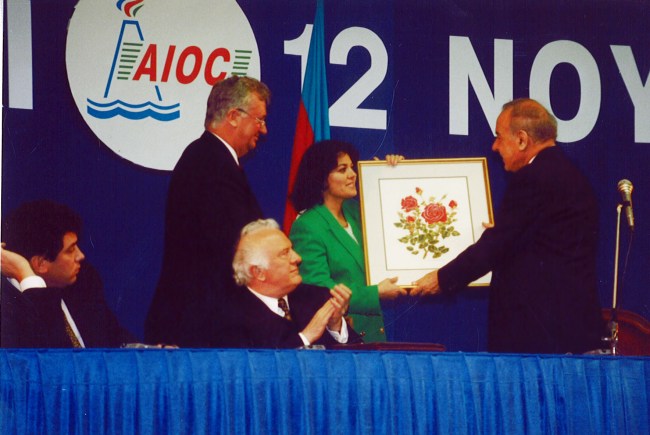 This rose, specially bred from original varieties of roses dedicated to Her Majesty the Queen of Great Britain, is named the “President Heydar Aliyev Rose of Peace”.

It was bred by “James Cocker & Sons” of Aberdeen, Suppliers of Roses to Her Majesty Queen Elizabeth, and was delivered to 10 Downing Street to be planted in the garden of the British Prime Minister. 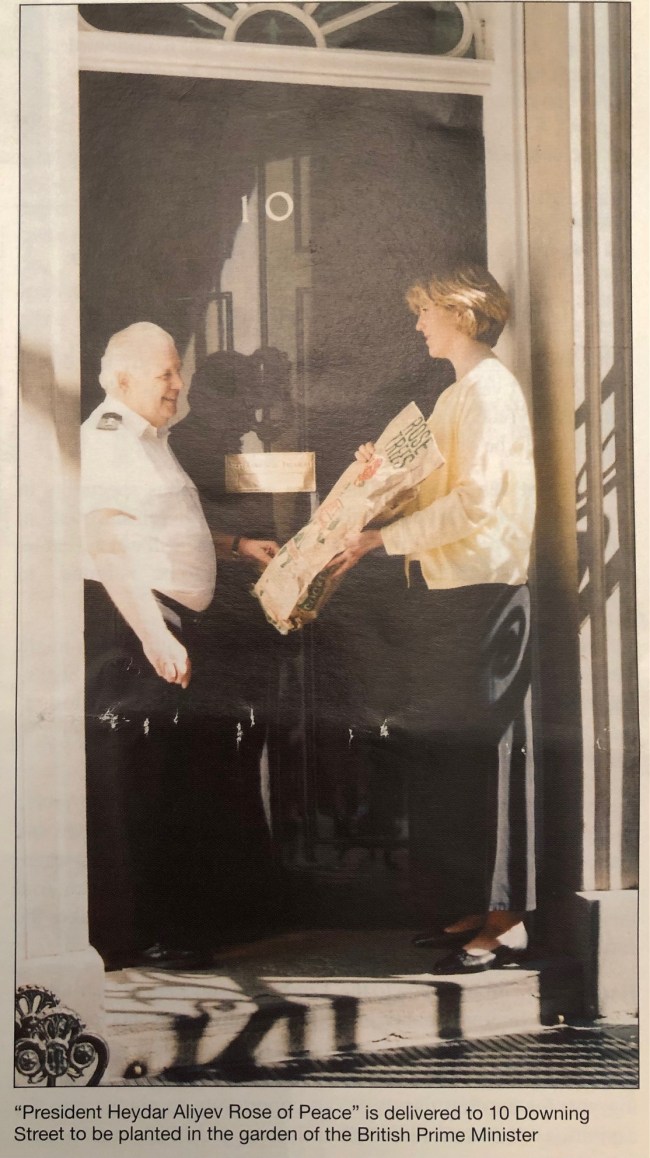 In 1998, two hundred bushes of the “President Heydar Aliyev Rose of Peace” were delivered to Baku and presented to all AIOC shareholder companies for planting in the national botanical gardens of the countries that they represent. I handed over the bushes of this rose brought from London to the President’s Administration for planting in the Mardakan botanical garden in Baku.

Now, looking back, we can witness the tremendous success Azerbaijan has achieved in building a prosperous nation due to Heydar Aliyev’s oil strategy. Today, the country is widely known as a successful model and maintains a delicate balance in foreign policy, while developing its economy and bolstering increased stability. 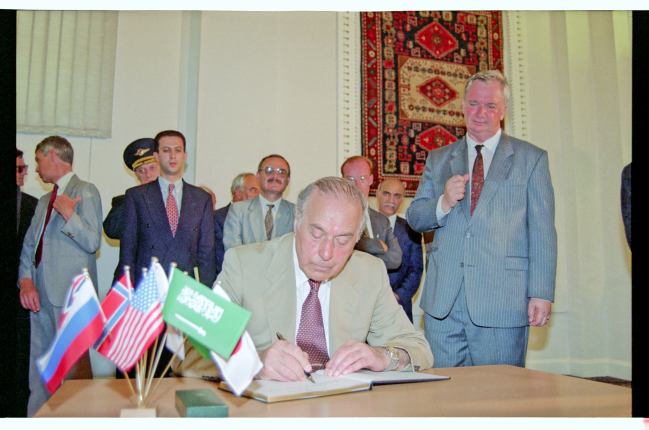 Heydar Aliyev’s balanced and mutually beneficial relations with global powers – the United States and Russia, have brought great advantages to Azerbaijan in the diplomatic and political spheres.

Close ties with the Non-Aligned Movement and the Organization of Islamic Cooperation, mutually beneficial cooperation with Turkey, Pakistan, Israel, the United Kingdom, and a number of EU countries, and their support for Azerbaijan, show how the geopolitical landscape in the region has changed.

This has been seen once again during the military conflict with Armenia in the autumn of 2020.  In the 44-day war, also known as the Patriotic War, Azerbaijan won not only on the battlefield, but also at diplomacy, and liberated Nagorno-Karabakh from occupation, and restored its internationally recognized territorial integrity. A peace deal has been agreed upon between Armenia and Azerbaijan to establish lasting peace in the region.

We can see that the “Contract of the Century” played an exceptional role in the development of Azerbaijan, bringing along great economic benefits, as well as political dividends to Azerbaijan and making it a worthy member of the world community. 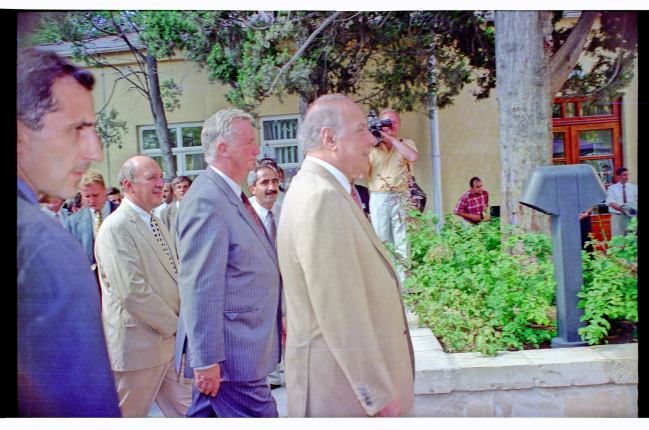 Historically, this great natural resource of the “Land of Fire” has found its way into the memories of the people in the world and still continuously represents Azerbaijan as an international symbol. Today, the “Contract of the Century” gave the world an “oil-scented rose”. May the perfume of the “President Heydar Aliyev Rose of Peace” created by the oil of Azerbaijan nowadays always find its way to win hearts and minds and be the bulwark of peace all over the world. 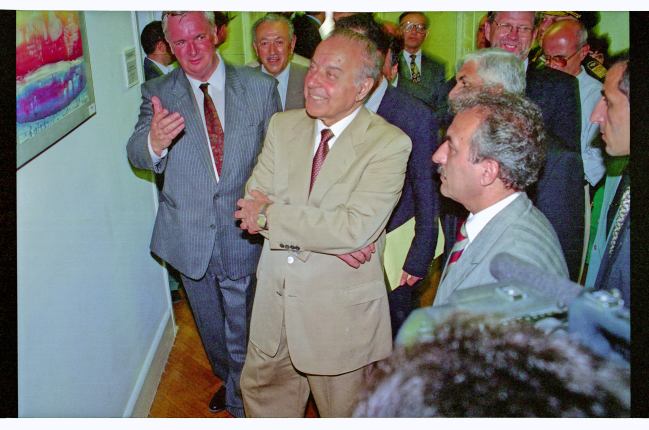