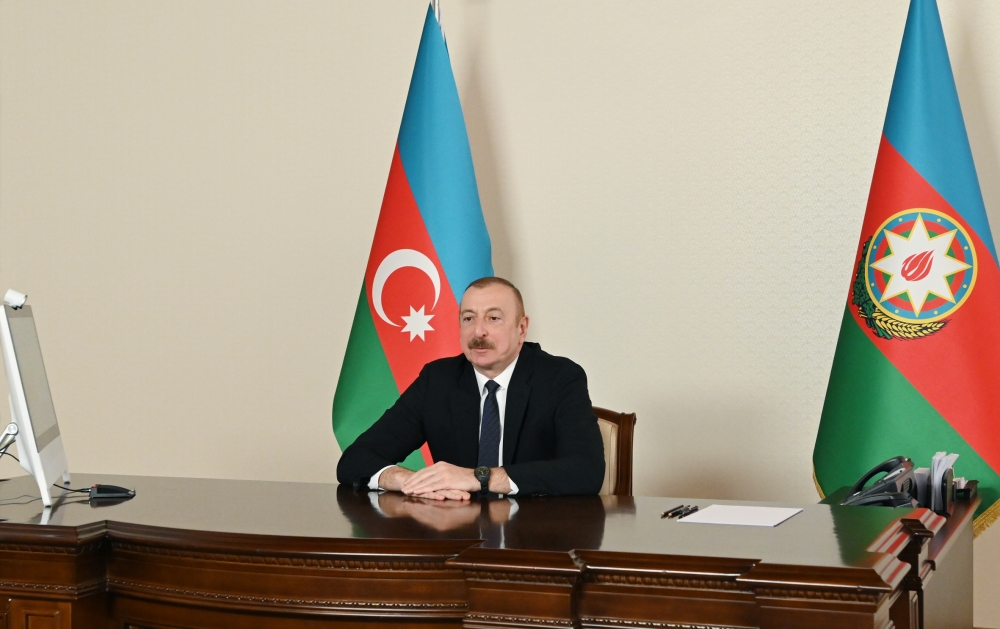 President of the Republic of Azerbaijan Ilham Aliyev has received in a video format co-chair of the Nizami Ganjavi International Center Ismail Serageldin, according to Azerbaijan in Focus, reporting AzerTac.

Ismail Serageldin: It is such a privilege Mr President. Thank you for arranging this meeting.

President Ilham Aliyev: I am very glad that you arrived in Azerbaijan. Due to the pandemic, you know the global forum, which was planned for the last year, was postponed. This is understandable. But at the same time, I know that Nizami Ganjavi International Center continued its activity, of course, with all the restrictions taken into account. Also, I would like to express gratitude to you, to co-chair Madame Vaira Vike-Freiberga, and other members of the Board of the Center for your kind letter addressed to me with respect to the liberation war, which Azerbaijan conducted successfully. Your letters during the time of the war and after war, letter of support, support of the territorial integrity of Azerbaijan are highly valued in our country. I am very grateful for this very open, sincere and just approach to our cause of liberation of the territories.

So, as you remember during the regular forum of Nizami Ganjavi International Center, addressing the audience, I every time was referring to the conflict, every time was referring to injustice, to violation of international law. Now, situation has changed. Azerbaijan has restored its independence, restored international law and created actually new realities in the region and in the world. I think a lot will depend now on proper evaluation of these realities by regional countries, by big powers in order to use this opportunity to establish long-lasting peace and stability in the region. I think that today Azerbaijan really demonstrates its willingness to turn the page of hostility, turn the page of hatred, of confrontation and to build the future for the region. And actually we already started, we started reconstruction, we started implementing projects which will be beneficial for all the regional countries, and eventually, for stability and predictability in the region.

Therefore, I think all of us need to evaluate the new realities and planning our actions as governments, as international organizations to focus on positive opportunities of cooperation and peaceful co-existence. Azerbaijan is committed to its obligations and during the war we behaved in a very distant way, in a very proper way of observing international norms and regulations and after war we demonstrate, I think, very constructive approach. So, I think that these realities will be long-lasting. The peace which our region was waiting for so many years have come and the peace must be long-lasting. I am sure that in the activity of the center you will also concentrate on these opportunities, on opportunities of post-war development, post conflict situation. Nagorno-Karabakh conflict is over. It is already part of the history and now we need to concentrate on the issues which are in front of us. First of all, of course, reconstruction, rehabilitation of the territories. Everything is devastated. We could not even imagine the scope of devastation and destruction. There is no single building in Aghdam, in Fuzuli. In other liberated territories, villages, cities. Everything is destroyed, historical monuments. So, a lot is to be done in order to re-build. But we are committed to do it. We have a strong will to do it, we have opportunities to do it, and of course, we want international community to know the reality now more than before. Because now when foreign diplomats, international media representatives are visiting the liberated territories, I think they really see what their occupation created for our historical monuments, for our cultural monuments. So, those who occupied our territories destroyed everything. So, I hope that during the next events after the pandemic, there will be opportunity for the members of the center to visit some of the liberated territories and maybe to organize some events there. But this is of course, part of our future cooperation and discussions. Once again, I would like to express gratitude for your support during and after the war, and very glad to see you again.

Ismail Serageldin: Well, thank you very much Mr. President, and for these wonderful words. Indeed, my number one item was to be able to congratulate you personally for this enormous achievement of having really reclaimed the territories of Azerbaijan. In fact, I was discussing with our colleagues in the Board that we should have a special event right now even with video, and so on without necessitating being able to go, about your great declaration when you said that all the historical monuments are under our protection regardless of religion. And I think that’s a very important thing, and we can probably get it better known, by bringing institutions that are involved in the protection of cultural heritage like UNESCO, World Monument Fund etc. into a discussion around your declaration because that will be a model for people to say the victor is not just magnanimous but there is as you say, you want to turn the page and promote regional peace, and one way of dealing with that will be the issues of the cultural heritage which tend to be the sensitive issues that are used by some people to heat up the passions in all sides. So you have prevented that by that important declaration and I think we can do an event on that. And first and foremost, I really wanted to congratulate you for this historic achievement. It is a historic achievement, that was not even possible to your great father Heydar Aliyev, but it was done by his great son. His great son that was really quite an achievement.
The sides exchanged views on future plans of the Nizami Ganjavi International Center and the organization of the Baku Global Forum.