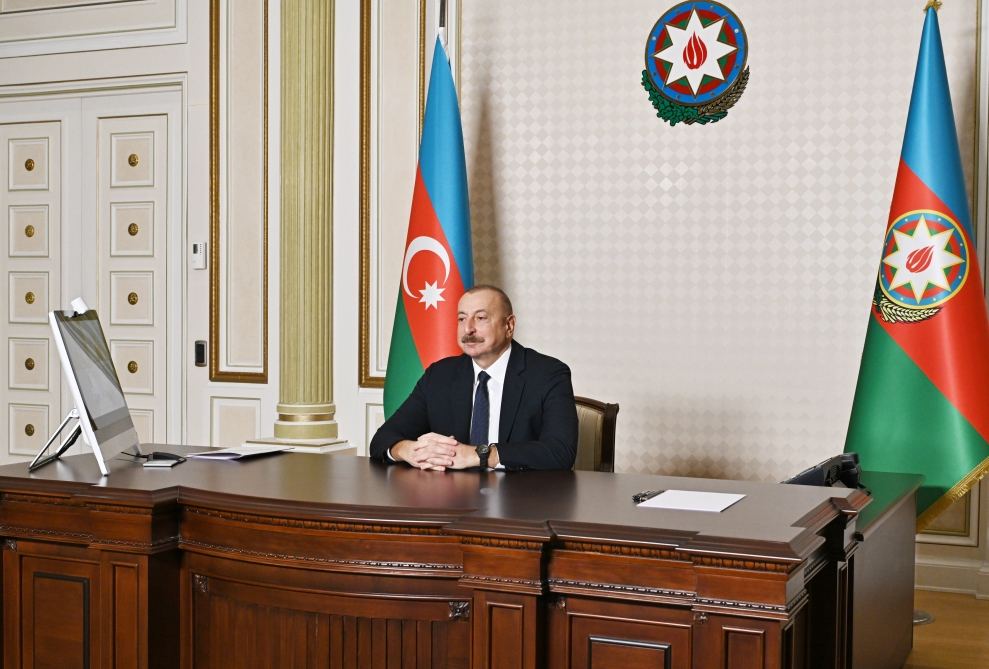 President Ilham Aliyev: I do hope that post-war period will open new opportunities for whole region

I do hope that the post-war period will open new opportunities for the whole region, President of the Republic of Azerbaijan Ilham Aliyev said receiving in a video format a delegation led by Minister of Road and Urban Development of the Islamic Republic of Iran, co-chair of Azerbaijan-Iran Joint Intergovernmental Commission on Economic Cooperation Rostam Ghasemi, according to Azerbaijan in Focus, reporting Trend News.

“After the Patriotic war, great opportunities have emerged for regional cooperation. After the war, Iranian-Azerbaijani relations have expanded in this direction. A very promising 3+3 cooperation platform has been put in place to establish regional cooperation. The first meeting has already taken place. I am confident that these meetings will be held on a regular basis in the interests of countries of the region. At the same time, I am confident that Iranian companies will begin to work actively in liberated lands in the near future. Relevant instructions have been given to the Ministry of Economy. Preliminary talks have been held with the Iranian side, and now we are waiting for concrete results,” the head of state said.

“Yesterday you saw the devastation in the liberated lands with your own eyes. During the occupation, Armenia destroyed all our cities and villages. Therefore, construction work has now begun on this large area – more than 10,000 square kilometers, but as you can see, this is very large-scale work. Hundreds of towns and villages have been wiped off the face of the earth. Restoration work has begun, and as I said, I do hope that Iranian companies will take an active part in this work,” the head of state said.

“Yesterday, you also got acquainted with the work being done to establish the Zangazur corridor. Both roads and railways are already being successfully built, and we are receiving positive news from Armenia. Armenia plans to start this work on its side as well,” President Ilham Aliyev said.

“In short, I do hope that the post-war period will open new opportunities for the whole region. Of course, the contribution of the Islamic Republic of Iran to this work is also very important,” the head of state said.

“As for other issues, the creation of the North-South transport corridor, the construction of the Khudafarin Hydroelectric Power Stations, the construction of a bridge over the Astarachay – all these and other issues were discussed with Shahin Mustafayev yesterday and will certainly be among the priorities of the intergovernmental commission,” the Azerbaijani president said.

“I must also say that my meeting with the President of the Islamic Republic of Iran in late November was very successful and important, as it opens new opportunities for Iranian-Azerbaijani relations. This means the opening of a new page in our relations, a page of friendship and brotherhood,” the head of state said.