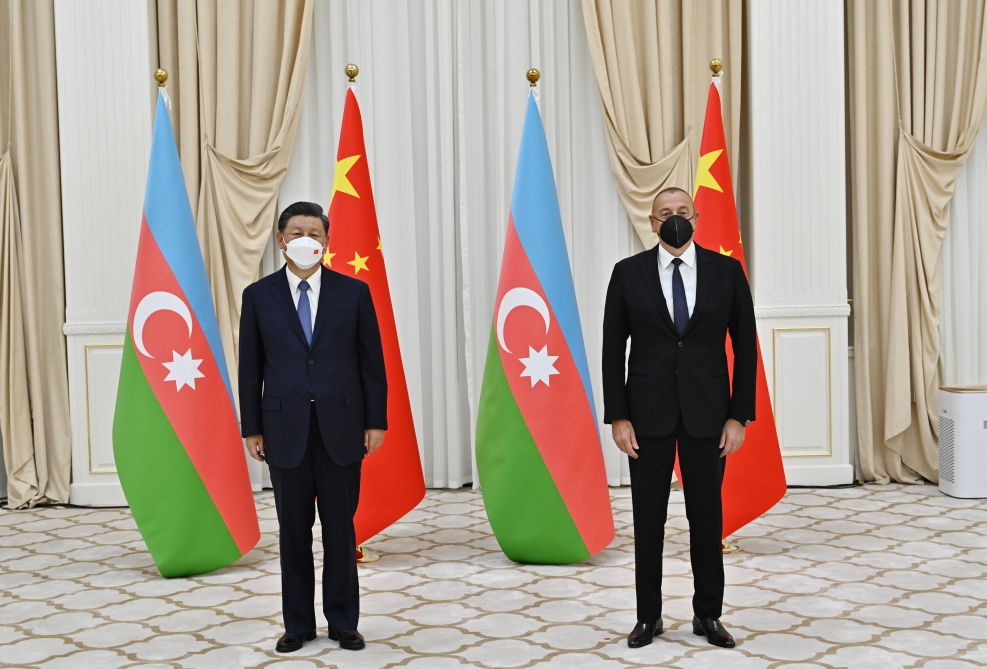 During the meeting, President Xi Jinping conveyed his congratulations to President Ilham Aliyev on the occasion of the 30th anniversary of the establishment of diplomatic relations between Azerbaijan and China, as well as the establishment of the New Azerbaijan Party. The head of state said that the relations between Azerbaijan and China were of the nature of a strategic partnership and were developing at a high level.

“We highly appreciate the importance you are attaching to the development of relations between Azerbaijan and China. We support the comprehensive development of our relations at the strategic level,” Xi Jinping said.

President Ilham Aliyev emphasized that he was very pleased to meet Chinese leader Xi Jinping, noting that he remembered their previous meetings, especially his visit to the People’s Republic of China to attend the “One Belt, One Road” Forum in 2019. President Ilham Aliyev also pointed out that the relations between Azerbaijan and China were of the nature of a strategic partnership, adding that the two countries cooperated successfully in a number of areas.

President Ilham Aliyev also expressed his gratitude to President Xi Jinping for his congratulations on the occasion of the 30th anniversary of the establishment of the New Azerbaijan Party, noting that there were very good relations between the ruling parties of the two countries. Indicating that the 30th anniversary of Azerbaijan-China diplomatic relations was celebrated with successful results, the head of state said that very beneficial and fruitful cooperation had been established between the two countries in all fields.

President Ilham Aliyev said he appreciated China’s support for Azerbaijan in the fight against the COVID-19 pandemic, describing the fact that Azerbaijan was one of the first countries to start the vaccination process thanks to vaccines purchased from China as a demonstration of solidarity.

The President of Azerbaijan said there were great prospects for cooperation and partnership within the Middle Corridor and One Belt, One Road projects. The head of state said that Azerbaijan was playing an important part in the transport processes between China and Europe, adding that the country’s transport and logistical capabilities were of great importance in international cargo transportation. Azerbaijan fully supports the increase of train and other cargo transportation from China to Europe and vice versa.

President Ilham Aliyev noted that Azerbaijan was carrying out large-scale reconstruction work in the territories liberated from occupation. Many Chinese companies had also applied for participation in these operations. Azerbaijan supports the active involvement of Chinese companies in these projects.

President of the People’s Republic of China Xi Jinping stated that his country supported the territorial integrity and sovereignty of Azerbaijan and noted that China appreciated the support Azerbaijan had shown for the territorial integrity and sovereignty of China. Chairman Xi Jinping stated that non-interference in the affairs of states was an important principle.

The head of state noted the importance of increasing inter-city relations, student exchange, as well as cooperation in the field of tourism, as a component of cooperation in the humanitarian field. The President of Azerbaijan said he was confident that after the pandemic was completely over, the tourist exchange between the two countries would be restored to the level before COVID-19. The head of state reiterated that China was a friend and strategic partner for Azerbaijan.

During the conversation, the sides also pointed out great prospects for the development of Azerbaijan-China economic and trade relations, increasing trade, promoting investment, and cooperation in energy, agriculture, transport, logistics, e-commerce, automobile transportation and other fields, increasing student exchange, and stepping up direct relations between the cities of the two countries.

The heads of state noted that joint efforts would continue to be made for the deepening and further development of bilateral relations.