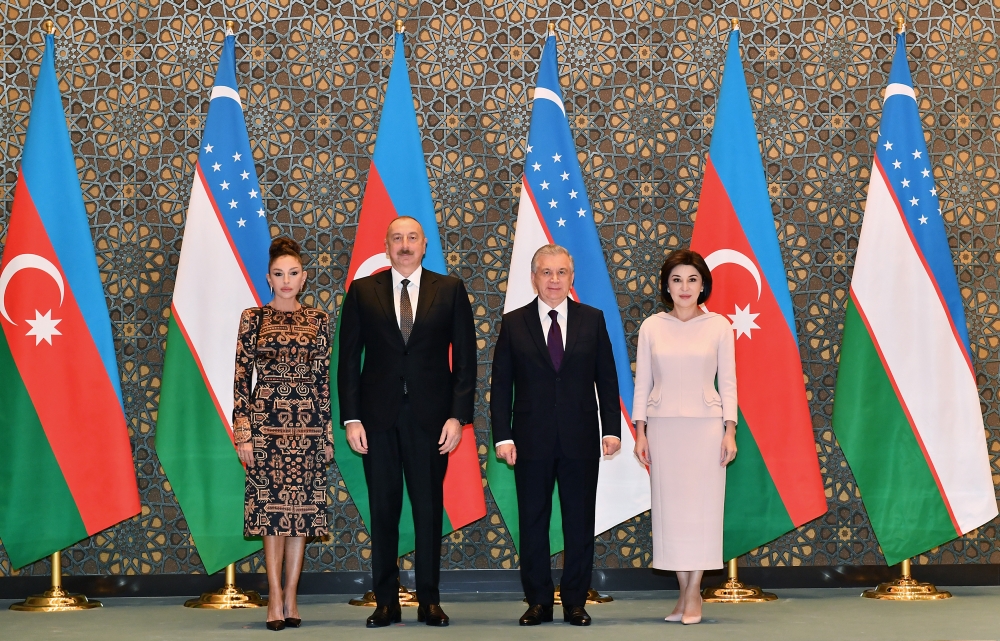 The heads of state and first ladies posed together for photographs.

– Dear Ilham Heydar oglu, you are welcome to Uzbekistan again! I am very glad to see you in Samarkand. I am also delighted that you have come here together with your wife, Mehriban Arif gizi. As I said it, it is quite symbolic. Tomorrow’s Summit has a symbolic meaning, because we laid the foundation of this event in Nakhchivan, dear Ilham Heydar oglu, in your homeland, in your father’s homeland. We see that many historic events have taken place in this direction. This historic event is taking place in Uzbekistan for the first time. Why it has been organized in Samarkand is also of great importance, because tomorrow’s Summit will be held in Samarkand for the first time under a new name. All of these developments are interrelated. So welcome!

Of course, as we said, our relations are of strategic importance. Let me give you an example – we are meeting you for the third time this year. This testifies to the strategic importance of our relations. This is the third time you are visiting Uzbekistan, so thank you very much for that. Our relations are systematic and, most importantly, they are producing concrete results. Our teams already know each other. We have made preparations for your arrival, there are many serious projects, there have been many visits and an extensive program. They are already meeting and talking. The meeting of the Intergovernmental Commission was successful and very good. The colleagues talked with the chairman of the Intergovernmental Commission and outlined some good plans.

First of all, I want to thank you for the invitation and hospitality. I am very glad to be visiting Samarkand again. Thank you very much also for your congratulations on the occasion of Azerbaijan’s Victory in the Patriotic War. We do appreciate the fraternal Uzbek people’s and your attitude towards us, towards our country and to the fact that Azerbaijan has restored justice. We felt this support during and after the war. Of course, I want to express my gratitude once again for your initiative to build a school in the liberated city of Fuzuli. This will be the first foreign contribution to the restoration work, and we do appreciate it a lot. As mentioned in the information exchange we have just had, the construction of the school has already started. This school will be a symbol of the brotherhood of our peoples.

We have got very close lately. In my opinion, this is also the will of our ancestors, and it is happening as part of the brotherly relations between our peoples. I am visiting Uzbekistan for the third time in seven months. Every time I come here with great love and respect for you personally, for the brotherly Uzbek people, and after being here, I talk about the great achievements of Uzbekistan under your leadership. It would be enough to visit Tashkent, Khiva and Samarkand. I am already quite familiar with Uzbekistan, and I must say that Samarkand has become an important international political center. Various world-class international events are held here with the participation of world leaders. I congratulate you on this occasion.

Of course, the topics you mentioned are on the agenda. We have agreed that we will monitor the implementation of our decisions. As you mentioned, good processes are developing in all directions.

During the meeting, the sides also exchanged views on the development of economic and trade relations between the two countries. In particular, the work carried out towards the implementation of the agreements reached as part of President Ilham Aliyev’s state visit to Uzbekistan was pointed out, and the activities of the intergovernmental commission were underlined in this regard.

The presidents also noted the positive results in the implementation of agreements reached in the field of machine building. Achievements in the fields of pharmaceuticals and energy, as well as the successful cooperation project established between the two countries in the field of sericulture, cotton-growing and textile sectors were emphasized. In addition, the sides noted that an interregional forum would be held at the end of this year to promote cooperation between regions of the two countries. The signing of agreements on the sidelines of this forum on the establishment of sister relationships between a number of cities of the two countries was described as a positive event. It was stated that these measures would make a significant contribution to the development of fraternal relations between Azerbaijan and Uzbekistan.

During the conversation, the sides said that the organization of the 9th Summit of the Organization of Turkic States in the city of Samarkand had a great historical and symbolic meaning. The importance of holding the first Summit in this historic city after the organization changed its name was hailed.