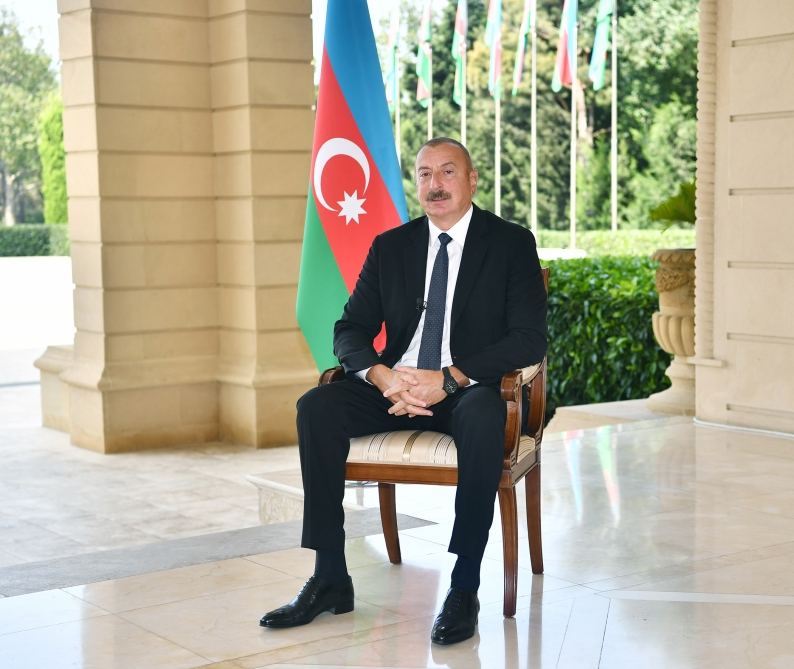 President Ilham Aliyev: Over the past 18 years, both Turkey and Azerbaijan have formed a common policy

“For all these years, we have made great effort to strengthen the Turkish-Azerbaijani unity. You know, there are many countries in the world with similar history, culture and ethnic roots. We are surrounded by countries whose languages are similar and whose ethnic roots are close. But notice what the relations between these countries are like. Some are enemies of one another. In other words, a common history and common ethnic roots do not mean that countries and their peoples should be brotherly. It is a manifestation of a great policy,” said President of Azerbaijan Ilham Aliyev in his interview with CNN Turk TV channel, according to Azerbaijan in Focus, reporting Trend News.

“Over the past 18 years, both Turkey and Azerbaijan have formed a common policy. Before that, in my father’s time, he made this famous statement, “One nation, two states”. Everyone knows this now. But some may not know that the author of these words is Heydar Aliyev. He said these words. These words are a guiding light for us. True to this testament and these words, we have strengthened our relations in all directions, raised them to a higher level. You can see during your contacts with people how much love and affection there is for Turkey here. This has always been the case. But in the second Karabakh war, it increased even more because the people of Azerbaijan saw very well who their real friend and brother is. The countries next to us were Turkey and Pakistan. We did not hear expression of support from certain countries. However, we were right. I repeat that we were restoring our territorial integrity. Therefore, it is natural for the Turkish and Azerbaijani flags to fly together. Our unity is eternal. The new generation, the young generation, your generation must follow our path. Because we have laid this foundation, lead the way, created a very strong alliance, created an unshakable unity. But politics is an area you have to work on every day. There should be no gaps for anyone to enter. Because there are some countries like that. Turkish-Azerbaijani unity is already a regional factor. Maybe someday it will become a global factor because we are already forming allied relations with other countries. This worries certain countries. They will try to go between us, they will try to provoke, create some fabrications. Therefore, the next generation must follow this path. This path must be eternal,” the head of state said.