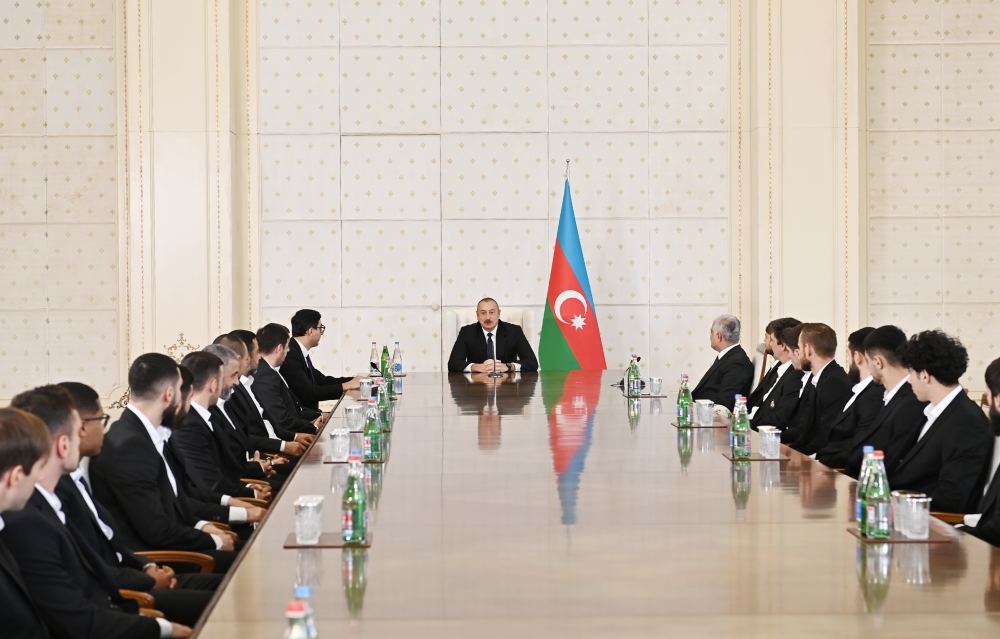 President of the Republic of Azerbaijan Ilham Aliyev has received members of the “Qarabag” football club which reached the playoffs of the UEFA Conference League, according to Azerbaijan in Focus, reporting Trend News.

This victory once again shows that the “Qarabag” football club is the flagship team of Azerbaijani football. This is not the first time that “Qarabag” has achieved great success in international competitions, deservedly representing our people and country in the international arena. These successes are not accidental. Because I know that the club’s management, coaching staff, and players show high responsibility and professionalism. At the same time, they work hard and tirelessly to improve their professionalism and achieve even better results.

Of course, it is no secret that the name of the “Qarabag” football club puts additional responsibility on you. You glorified the name of Karabakh both during the occupation and after the historic Victory in the second Karabakh war. And you promote this name throughout the European football space. I want to say again that if we take into account that our lands, including the city of Aghdam, were under occupation for many years, every victory and every historic step of the “Qarabag” football club pleases every citizen of Azerbaijan. I am sure that, at the next stage too, you will make our people happy by showing the determination and patriotism inherent in the team.

Reaching the playoffs of the European Conference League is a great achievement. Of course, we could have played directly in the quarterfinals, but, unfortunately, the injustice of the referee did not allow that to happen. I did not use this word by chance: not a refereeing mistake, but injustice. Because it would be wrong to describe this disgraceful event as a mistake. At the same time, this is not the first time that the “Qarabag” football club has faced such explicit injustice in European competitions. We encountered this many times in previous years too. This time we came across this many times at the group stage. In the decisive game of 2014, a clear goal scored in the last minutes was disallowed by the referee, who thus deprived you of qualification for the next round. If I am not mistaken, it was Czech referee Zelinka who took such a shameful step. It is very unfortunate that this shameful tradition continues in European football to this day. This time, Croatian referee Jovic disallowed an obvious goal scored right in front of all spectators and television viewers. It is impossible to say that it was a mistake. After all, this is a European tournament. This is not a village tournament, not a neighborhood tournament, not a tournament between yards. This is a European tournament where the most professional and experienced referees in Europe are involved in refereeing the games. How can you not see a ball that has crossed the goal line by at least one meter? Well, you are blind not to see this, then the linesman doesn’t see it either, he is also blind. But why did they collect and bring these blind people here? Why do we face this disgraceful picture only in the games of “Qarabag”. I know the answer to these questions, you do too, and so do the people of Azerbaijan: injustice, double standards, prejudice against us, our country, not only you but our country as a whole. This is the answer. If it happened once or twice, we could have said that it was probably a mistake and that it was an accident. No, this is a systemic problem.

I do hope that UEFA will take tangible steps to eliminate this problem. I do hope that the referees responsible for these shameful cases will be punished. Otherwise, if no punitive measures are taken against them, then we will witness it again. Next time, you will be deprived of a just victory again. Next time, injustice, double standards, and discrimination will be continued.

Football and sports must be separated from politics. Many say so, but unfortunately many also violate this principle. Because there have been many attempts to politicize sports, to use sports as a political tool, to transfer sports achievements onto a political plane. I have been President of the National Olympic Committee of Azerbaijan for 24 years. Over the years, I have repeatedly faced injustice in international competitions and the Olympic Games. The recent Olympics are no exception. Of course, we must not remain silent.

I know that “Qarabag” football club, the management and coaches always act with great dignity, do not raise a hue and cry over this like some other coaches and club leaders, do not create scandals, and do not raise their hand. I welcome this. A strong person always behaves in an orderly manner, always uses his strength when necessary, and I welcome that. But this does not mean that such shameful events should happen to us every time. Therefore, I am convinced that the necessary legal steps should be taken in accordance with the rules adopted by the European football family so that such cases do not happen again in the future.

At the same time, I must say why I pay so much attention to this. You know, like every citizen of Azerbaijan, my heart aches when I see such disgraceful situations. I also ask myself how much longer do we have to tolerate that. How much longer will this last? We all understand that this is not just an accident. This is either done by a pre-instructed referee or he does it on the basis of some sentiments and feelings. There is no other name for that. It is impossible not to see this. At the same time, this should not discourage us. We lived as an occupied country for 28 years. We endured for 28 years, we made preparations, we gathered strength, and drove the enemy out of our lands. Over the years, we have faced many injustices and double standards. It did not discourage us at all. On the contrary, it inspired me as President, even more, it made me even more determined. It gave me extra strength to carry out this historic mission. I am sure that this injustice will give you additional strength. You will go into the next games with greater determination and resolve, and you will glorify the name of “Qarabag” and the Azerbaijani football community.

You have seen what the city of Aghdam is like today. The whole world can see it now. Thousands of people – politicians, MPs, public figures, journalists, foreigners – have already visited Aghdam and seen the destruction. More than a year has passed since the war ended. But has a European organization said a word about this tragedy, this disaster, this fascism? No! They are ignoring it as if it never happened. The city of Aghdam does not exist now, it has been completely destroyed, looted, and mined everywhere. Since the war ended, we have lost about 200 people, or they have been disabled. But has a European organization condemned Armenia for this tragedy? No! Has a European organization condemned Armenia for ethnic cleansing and the Khojaly genocide during the occupation? No! This is the truth, this is the reality, and, of course, we must take this reality into account, but we must never come to terms with it. Just as we did not come to terms with the occupation, we did not come to terms with this injustice. We gathered strength and struck such a blow to the enemy that the whole world can no longer say a word about our Victory. The whole world has had to accept our historic Victory. Because there is no other way. Why? Strength, resolve, unity, solidarity, and responsibility. In politics, life, and sports, I think these factors will bring dignity to every person, every politician. I want to say again that your victory is not just a sports victory. Because you represent the city of Aghdam. I am sure that one day we will build Aghdam as I said, so that Aghdam will be an example to the whole world, and you will play your home games in Aghdam, at the Imarat Stadium, where you will win bright victories and make our people happy.

I am meeting you for the third time – we met in 2014, in 2017, and now. Why? Because you bring victories to our country and people, and I would like our other football clubs to follow in your footsteps. I will meet with them and congratulate them on their achievements and success too. I am sure that it will happen. But I repeat, “Qarabag” is still the leading team of Azerbaijani football. I wish you success, achievements, and victories at a new stage. Congratulations again. 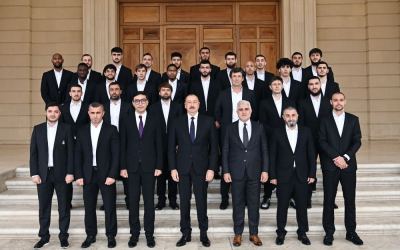 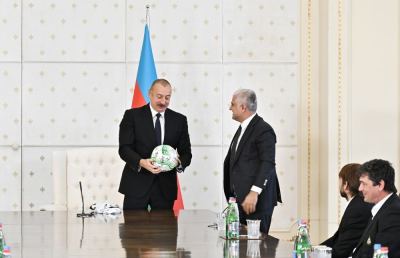 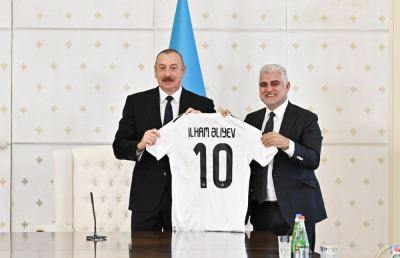