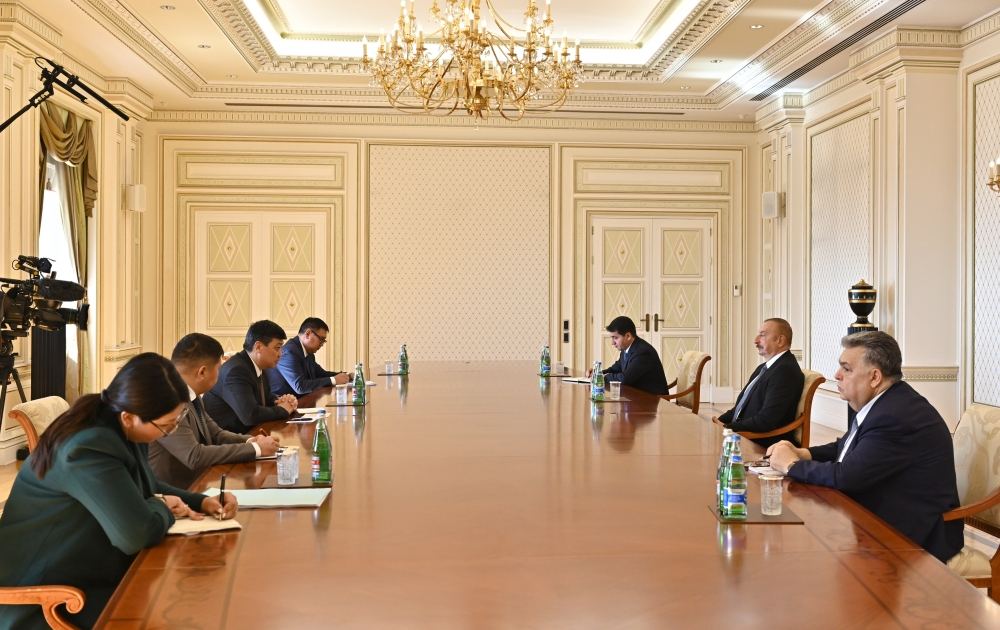 President of the Republic of Azerbaijan Ilham Aliyev has received Deputy Chairman of the Cabinet of Ministers of the Kyrgyz Republic Bakyt Torobayev, according to Azerbaijan in Focus, reporting Trend News.

Touching upon the meeting of the Joint Intergovernmental Commission on economic and humanitarian cooperation between the Republic of Azerbaijan and the Kyrgyz Republic to be held in Baku, the head of state expressed his hope that this format will contribute to the strengthening of mutual activity in economic and other areas.

Highlighting the bilateral relations, the head of state hailed the contribution of the high-level reciprocal visits to the expansion of bilateral ties. In this regard, President Ilham Aliyev said that during the visit of the President of the Kyrgyz Republic to Azerbaijan this year, fruitful negotiations on the broad agenda of cooperation were held and very good personal contact between the heads of state was established. President Ilham Aliyev mentioned that as part of the visit discussions were held on strengthening bilateral relations, cooperation within international organizations, and Azerbaijan’s investment in Kyrgyzstan, as well as other areas of cooperation.

Noting that diversified transport infrastructure has been established in Azerbaijan, the head of state said that other countries, including the countries of Central Asia, are increasingly interested in the international transport potential of Azerbaijan. At the same time, President Ilham Aliyev also emphasized the importance of plans to establish new railway networks in the Central Asian region with access to the Caspian Sea basin.

Bakyt Torobayev conveyed the greetings of President of the Kyrgyz Republic Sadyr Japarov to the head of the state.

President Ilham Aliyev thanked for the greetings and asked Bakyt Torobayev to extend his greetings to President Sadyr Japarov.

Bakyt Torobayev noted that the foundation of Azerbaijan-Kyrgyzstan relations, which are based on historical and cultural roots, in the modern period was laid by the historical figure of world scale, the national leader of the Azerbaijani people Heydar Aliyev, and today, with the support of President Ilham Aliyev, they have reached the level of strategic partnership.

During the conversation, the sides stressed the importance of cooperation in humanitarian and educational fields, as well as discussed the issues of future cooperation in agriculture, energy and investment.