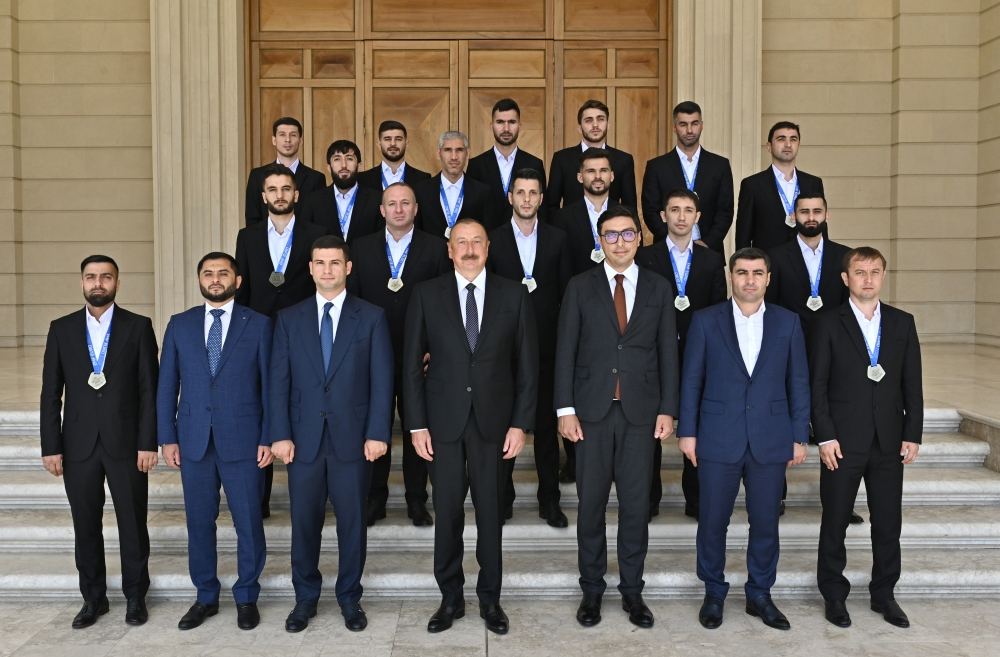 President of the Republic of Azerbaijan Ilham Aliyev has received members of the Azerbaijan national mini-football team who won the European Championship in Slovakia, according to Azerbaijan in Focus, reporting Trend News.

The head of state made a speech at the meeting.

Hello, first of all, I congratulate you on the historic victory. I think that this victory will go down in the history of Azerbaijani sports because our country has become a European champion in team sports for the first time, and this victory has been won by you, by our national team in mini-football.

A lot has been done for the development of sports in Azerbaijan, but we had not achieved great success in team sports prior to this. It is true that our chess players have twice been European champions, but chess is an individual sport, and our chess players who played as a team have made this great achievement. However, there has been no such victory in game sports. Therefore, this victory has a great meaning, and I am sure that it is a great example for other sports.

It is true that it will not be easy for anyone to emulate this historic success, but we must try to ensure anyway that Azerbaijani athletes show good results in international competitions not only in individual but also in team sports. As you may know, we have had great successes in individual sports, the number of Olympic, world and European champions is high, and I am sure it will further increase. Thus, the development of team sports will enable sport to develop comprehensively.

I am glad that our team consists of local athletes – players, coaches and specialists. This makes me particularly happy. I also know that our mini-football team has joined European Championships for the second time and has already become champion. The rivalry was quite close, and European Championships in any sport are very intense. Of course, the strongest teams in Europe are represented there. Your professionalism and I can say that your great self-sacrifice during the championship made this victory possible. You have made our people happy, and it is no coincidence that the citizens of Azerbaijan welcomed you at the airport with great admiration. I congratulate you with all my heart. This is indeed a great victory, a historic victory.

The state has created all the conditions and there are no obstacles to the development of sports. On the contrary, state support is always provided. But when it comes to mini-football, since it is a relatively new sport for us, so deserve credit for this success. I can’t say that some special conditions have been created for mini-football players or that well-known specialists and coaches have been invited from abroad. None of this was the case. Therefore, your victory is worth a lot. You have won this victory yourself, of course, the federation and sports specialists, coaches and players – this is what I mean by a team. You have won this well-deserved victory with your hard work.

Azerbaijan pays attention to both sports and athletes. Athletes are always taken care of by the state, and this is natural. Because our victories in sports raise the international prestige of our country, but also promote a healthy lifestyle, and I think this is even more important. Because we all want the people of Azerbaijan to be healthy, and young people to go in for sports on a large scale. The state always pays great attention and takes care of the athletes, clubs and federations in order to expand the popularity of sports and achieve victories in it. I am sure that from now on our mini-football federation will be provided with the same care by the state.

With your victory, you have demonstrated that where there is a will and professionalism, where there is love of the Motherland, one can achieve what is inaccessible to others. I am sure that no one in Azerbaijan expected your victory. I don’t know if you were expecting it or not, probably as the championship progressed you began to feel that it was possible. But I am sure that no-one in Azerbaijan, including myself, expected this victory, and this is the reason for the double joy of this victory. In other words, it shows that it is possible, it is possible to defeat the strongest opponents – if there is a team spirit and, I repeat, if there is professionalism and patriotism.

I am aware that many of you are engaged in various activities and that, in the true sense of the word, you are amateur athletes. If it is possible to say so, mini-football is a hobby for you. You faced the strongest teams in Europe. I am sure that the financial support and other advantages of those teams were many times higher than yours. Nevertheless, you have won, made us all happy and inscribed your names in the history of sports in Azerbaijan.

I congratulate you once again and wish you continued success. Of course, it will be very difficult to repeat this success but I am sure that the prospects of our team are also very good. I am sure that after this victory, the younger generation – children and teenagers – will choose this sport to become European champions like you.

Congratulations once again! I wish you more victories and thank you for making the people of Azerbaijan happy with this wonderful victory.

Dear Mr. President, let me express my deep gratitude to you on behalf of our federation, all our players and coaches. Today is a very glorious day for us. You are right, our footballers have brought the trophy to you with their hard work. We are really happy, and we want to assure you that we will continue to work hard for these victories to be consistent.

Dear Mr. President, I would like to draw your attention to the fact that mini football, although a non-professional sport, is quite popular with people. We decided in 2017 to establish a federation. In 2018, we were elected a member of both the World MiniFootball Federation and the European MiniFootball Federation. We participated in the European Championship in Ukraine in 2018, and it was a great experience for us to participate in it. As you know, there were lockdowns during the pandemic, but we did not stop training, especially in preparation for this championship. When this championship started, we were ready. Of course, participation was key for us. You are right, it was a great experience for our players. But the victory we won in each game increased our enthusiasm more and more. We lost our first game against the European champions – the Romanian team. But then we won a great victory against Spain and beat the teams of other countries. In the final, we faced the Romanians again. Of course, here we saw the fruition of the coach’s tactical moves. Our rivals also emphasized it there. We won almost without making a mistake.

Of course, Mr. President, it is an undeniable fact that you take great care of sports and athletes in particular, and always receive them. As we won every game, we hoped and thought that maybe Mr. President would receive us too. We are very grateful to you. It is indeed a very proud day for us. Thank you very much, Mr. President.

Mr. President, on behalf of myself and the team, thank you for spending your valuable time with us. We did our best to make our people happy. Thank you, thank you very much.

The captain of the team, goalkeeper Ramil Hasanzade, said: Mr. President, thank you very much for allocating time to us despite your busy schedule. We, the mini-football players, also feel your attention. During this European Championship, no one would believe that Azerbaijan would be the champions. But we also showed the Iron Fist on the football court during the competition. Hopefully, we will worthily represent our country in all future competitions. Thank you very much. Mr. President, we have a few gifts for you, If you would allow, we would like to present them to you.

The head of state was presented with keepsakes.

Then they posed for photos.