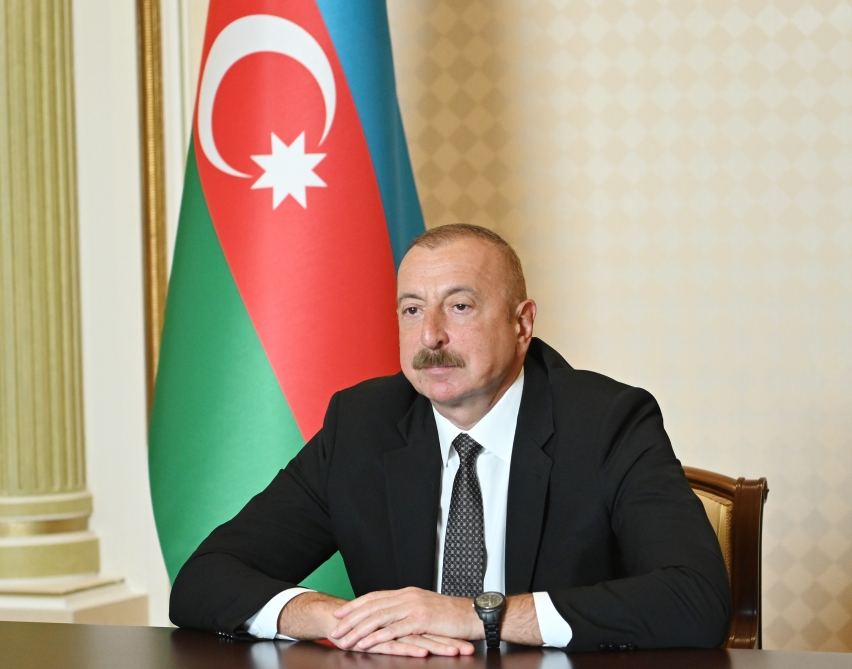 We have large water resources in the liberated lands and our water sources generate from there. We have been deprived of these opportunities for many years – for almost 30 years. Armenia pursued a policy of aggression against Azerbaijan in this area too.

Environmental terror was organized against us, President of the Republic of Azerbaijan Ilham Aliyev said receiving Zaur Mikayilov in a video format in the occasion of his appointment as Chairman of Azerbaijan Melioration and Water Management Open Joint Stock Company, according to Azerbaijan in Focus, reporting Trend News.

“Deforestation, destruction of reserves – 54,000 hectares of forest were felled, destroyed, looted and stolen by Armenians, and this is a serious crime. All the damage is now being calculated, including this damage. They deprived us of water. The Sarsang reservoir and the Sugovushan reservoir were under their control. These two reservoirs were built by great leader Heydar Aliyev in the 1970s. On his initiative, these reservoirs were built to carry out irrigation work in Aghdam, Tartar, Goranboy, Barda and other districts. The main purpose and function of the Sarsang reservoir were to supply water to these and other districts. At that time, about 100,000 hectares of land were supplied with water from this source and from Sugovushan. It is a smaller reservoir. More than 500 million cubic meters of water were stored in the Sarsang reservoir. But the Armenians cut off our water, deliberately let released it in winter to cause environmental damage and cut off the water in the spring and summer, so we were left without water. We prepared a special action plan for the irrigation of that area, and on my instructions, hundreds of artesian wells were drilled there. However, when we liberated the Sugovushan settlement, we also took control of the Sugovushan reservoir. After Sugovushan came under our control, there was an opportunity to significantly improve the water supply of Aghdam, Tartar, Barda, Goranboy and other districts. However, the canals leading to these districts have not been used for many years. It is necessary to analyze what their condition is now and if there is a need for repair. This work should be examined so that we can make water available to our people without wasting time,” the Azerbaijani president said.

“The Khachinchay reservoir is located in Aghdam district, near Fuzuli city, or rather the destroyed Fuzuli city. Groups have already been sent there on my instructions. There are other reservoirs in the liberated lands. All their parameters must be analyzed. Of course, we will use these reservoirs efficiently. After our citizens return to the liberated lands, this will create additional opportunities for them, of course,” the head of state said.

“At the same time, we have large river resources in the liberated lands. We were deprived of them. Today, our rivers originating in the liberated lands are our main rivers. The Tartarchay originates in the territory of the Kalbajar district. But the contemptible enemy deprived us of the water of the Tartarchay. When I enquired about this problem during my repeated visits to the Karabakh region, I saw that it creates big problems. For example, the water of Tartar was completely cut off. The Tartarchay river was almost dry in many places. Now we have returned to the Tartarchay, to its source. The Bazarchay, which is also called the Bargushad river, the Hakari river, the Okhchuchay – there are many rivers, more than 10 rivers originating there. Their potential must be analyzed. There must be a proper analysis of the river flow and how we can use these rivers effectively. Many of them flow into the Araz River,” President Aliyev said.

“The potential of all our water resources both in the liberated lands and in other parts of the country must be carefully analyzed. Specific programs and proposals must be submitted to make the best use of these water resources. So there is a lot to be done in this area, both in the liberated lands and in other areas. The main principle should be modernity, environmental safety and maximum efficiency so that the people of Azerbaijan, those engaged in agriculture see positive changes in their lives. I am sure it will be the case,” the head of state said.