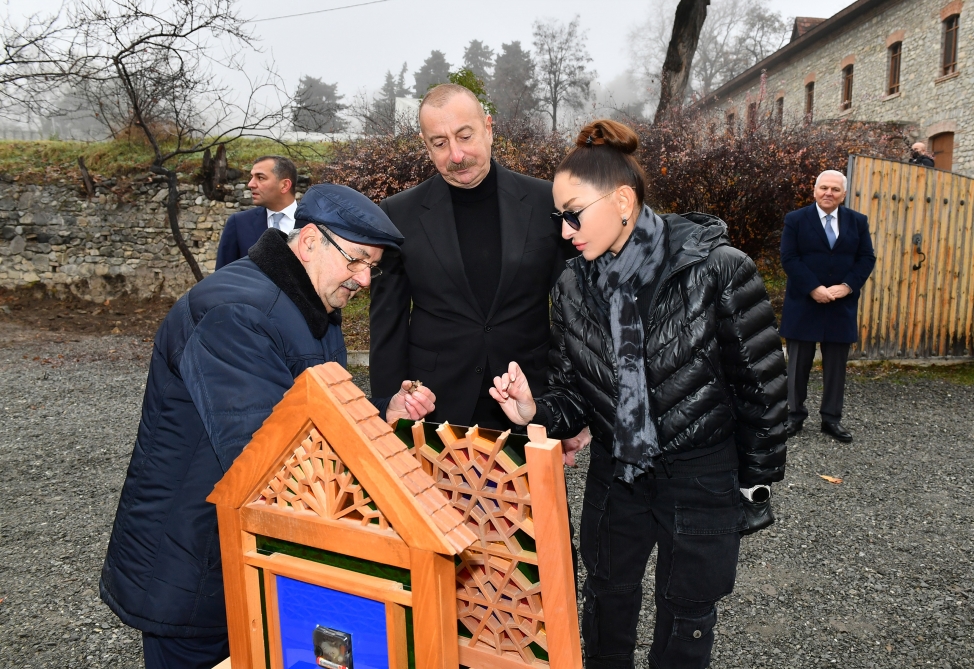 President of the Republic of Azerbaijan Ilham Aliyev, First Lady Mehriban Aliyeva and their daughter Leyla Aliyeva have viewed the repair and restoration work carried out in the territory of “Yukhari Bash” National Historical-Architectural Reserve in the city of Shaki, according to Azerbaijan in Focus, reporting AzerTac.

It was noted that the State Tourism Agency had completed the repairs and restoration of two monuments inside the Castle walls (the Art Gallery and the administrative building of the reserve) on the premises. Both of these monuments were built as barracks belonging to the soldiers of Tsarist Russia in the 19th century.

Information was also provided about the restoration work underway in the catering facility of the reserve. It was noted that the historical building, constructed in the 19th century and currently under state protection, was built in the style of traditional Shaki architecture. Unfortunately, during the Soviet era, a hospital operated in the building. This resulted in the complete destruction and distortion of its architectural heritage. The architectural monument is currently being restored and conserved in the historical architectural style. Its interior design is being adapted for catering purposes and for hosting events.

President Ilham Aliyev, First Lady Mehriban Aliyeva and Leyla Aliyeva were informed about the restoration work to be done in the shabaka workshop.

It was brought to the attention that the building where the shabaka workshop was to be located an architectural monument taken under state protection. The building includes the main structure with a total area of 127 square meters and auxiliary buildings with an area of 30 square meters. The building currently being restored will be used as a “Shabaka House” workshop. According to the new concept, in addition to the shabaka production center, an exhibition hall displaying the history of this art, a showroom for interactive tourism experience and a souvenir production and sales center will be created in the workshop. At the same time, a “Shabaka Training Center” will operate here for the training of new masters.

Then President Ilham Aliyev, First Lady Mehriban Aliyeva and Leyla Aliyeva were informed about the repairs and restoration carried out in the circular temple in the reserve.

It was noted that the circular temple was an architectural monument built at the beginning of the 19th century and taken under state protection. The architecture of the circular temple is reminiscent of the architectural style of the ancient temples of Caucasian Albania. The building functioned as an Orthodox church in the 19th century and was then used as a warehouse and for other purposes during the Soviet era. The building was initially circular in shape but later auxiliary buildings were added to it on three sides. The Shaki Museum of Applied Arts has been operating in the building for the past 30 years. The building is currently being restored.

It was also indicated that the State Tourism Agency was continuing repairs and restoration in some historical buildings within the walls of the Castle. This includes the walls of the Shaki Khanate with a total length of about 1,300 meters. The castle walls were first used by Shaki khans and then, in the 19th century, by Tsarist Russia for military purposes.

It was pointed out that one of the architectural monuments of the reserve is a barracks built in the 19th century and is currently under state protection. The building was constructed in a traditional architectural style using local construction materials. The building consists of an entrance and a main hall. Currently, restoration has started in the building which will function as a fund room for the “Yukharı Bash” National Historical-Architectural Reserve.

Then the head of state was informed about the ongoing restoration work in the Museum of History and Local Lore. It was indicated that the building of the Museum of History and Local Lore is an architectural monument constructed at the end of the 19th century and is currently under protection. The building was constructed as barracks for Russian soldiers using traditional local building materials (river stone and baked brick) and in the style of Shaki architecture. There are more than 2,461 exhibits in the museum. The building is being renovated now.

It was indicated that the building, which has been used as an art gallery since 1982, is an architectural monument under state protection and was restored by the State Tourism Agency in 2022. The building’s historical and architectural style has been preserved, its façade and roof restored and the communication system completely rebuilt. The total area of the gallery building is 296 square meters. The building consists of three parts: the entrance, exhibition halls and an administrative section.

It was also noted that 254 exhibits were stored in the Art Gallery. A total of 69 exhibits, including 61 paintings and eight sculptures, are currently on display, whereas 185 artifacts are protected in the gallery’s funds. The artifacts displayed in the exhibition are arranged in chronological order for the visitors to have a deeper understanding of the history of Azerbaijani art, its different directions in terms of subject and style, and periods of development. In order to protect the works of art in the exposition, a system of appropriate temperatures and humidity has been installed.

Displayed in the first hall of the gallery are famous artist Maral Rahmanzada’s “Woman wearing kalaghayi”. The second hall features “In Zangazur” composition, which describes a herd migrating to the plain , and “Garagol” (a lake located in Lachin district on the border between Azerbaijan and Armenia), while displayed in the third hall are works by prominent Azerbaijani artists Altay Sadigzada “Coast”, Sakit Mammadov’s “East” and Elbay Rzaguliyev’s “Red horsemen”.

After viewing the Historical-Architectural Reserve, President Ilham Aliyev, First Lady Mehriban Aliyeva and their daughter Leyla Aliyeva talked to the Shaki city residents and posed for photos together with them.