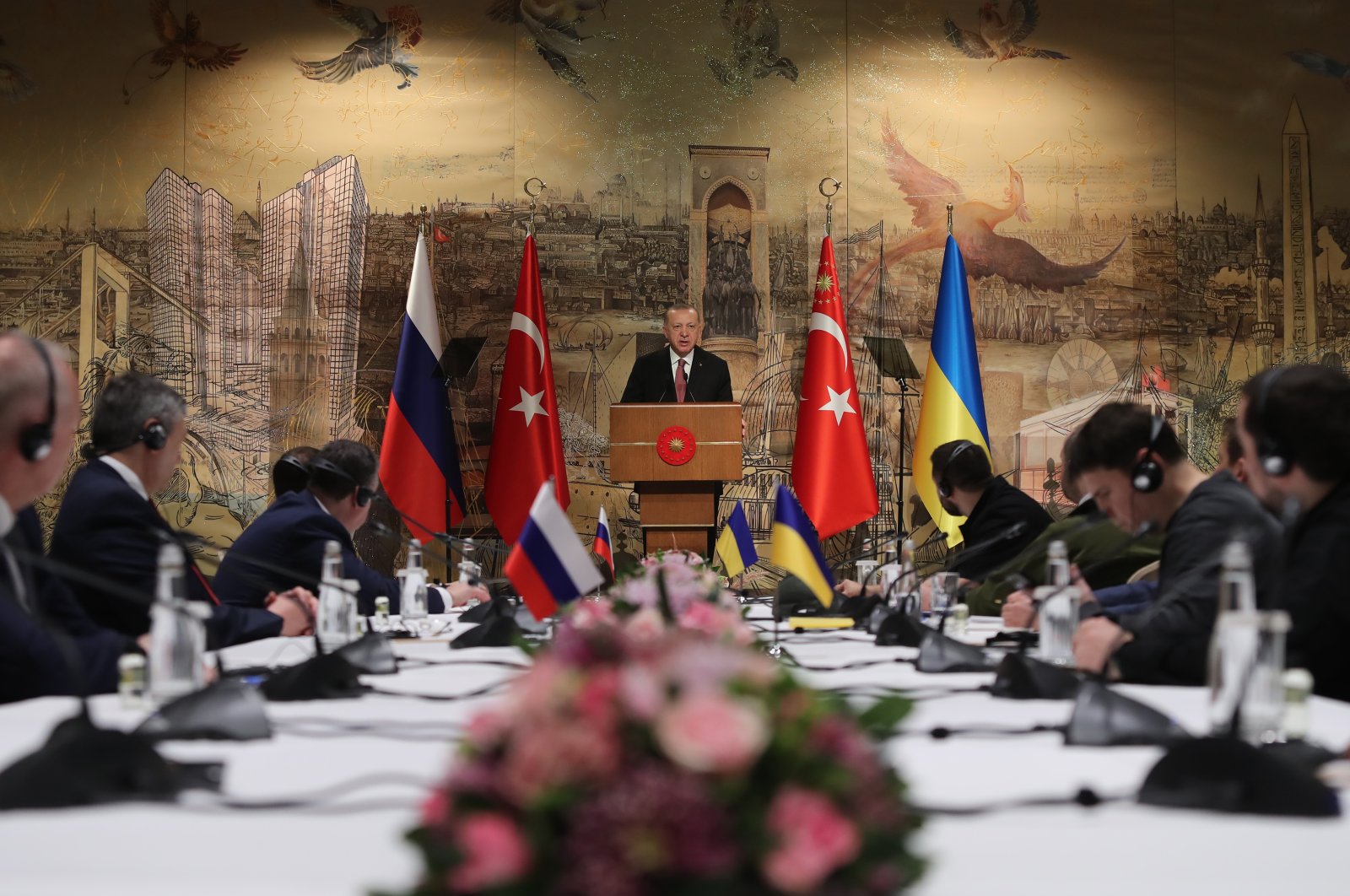 Progress at peace talks in Turkey to allow Putin-Zelenskyy meeting

Progress made at the peace talks between Ukrainian and Russian delegations in Turkey may pave the way for a meeting at the leaders’ level, President Recep Tayyip Erdoğan said Tuesday, according to Azerbaijan in Focus, reporting Daily Sabah.

Addressing the Russian and Ukrainian delegations who are in Istanbul for peace talks, Erdoğan sounded optimistic that progress can be made and said Turkey would be pleased to host a meeting between Russian President Vladimir Putin and Ukrainian President Volodymyr Zelenskyy, both of whom he referred to as “valuable friends.”

“We hope the meetings will be beneficial for both countries and the region, as Turkey is deeply worried about the conflict,” he said.

The president said the negotiation process between Russia and Ukraine has increased hopes for peace and that ensuring a cease-fire as soon as possible would benefit all parties. He congratulated the delegations from both sides for exerting great efforts and said that they have the prerogative to end the tragedy, which has killed thousands of Ukrainians and destroyed cities.

Stressing that Turkey has been displaying a fair stance that emphasizes the rights of both sides, Erdoğan said it is about time that the talks start producing results. He also noted that Turkey has not hesitated to undertake responsibility for peace and stability in the region.

“We believe that there will be no loser in a fair peace deal,” the president said, adding that the world is awaiting good news from Istanbul.

Erdoğan said he will be leaving for the Uzbek capital Tashkent but Foreign Minister Mevlüt Çavuşoğlu will stay in Turkey for the remainder of the meetings and is prepared to provide assistance if needed.

“I know that you will not hesitate to take the initiative to re-facilitate peace,” he said.

The Russian and Ukrainian delegations arrived in Istanbul on Monday.

They are meeting at the Dolmabahçe working office in Istanbul’s Beşiktaş district.

On Monday, Ukrainian Foreign Minister Dmytro Kuleba said his country’s most ambitious goal at talks with Russia in Turkey this week is to agree on a cease-fire.

“The minimum program will be humanitarian questions, and the maximum program is reaching an agreement on a cease-fire,” he said on national television when asked about the scope of the latest round of peace negotiations.

Earlier peace talks between the sides held both via video and in-person failed to make progress.

Zelenskyy hinted that Ukraine is prepared to declare its neutrality and consider a compromise on contested areas in the country’s east to secure peace – but he said only a face-to-face meeting with Putin can end the war. A meeting like that hasn’t happened yet.

Russian forces invaded Ukraine on February 24 in what Putin calls a “special military operation” to demilitarize Ukraine. Ukraine and the West maintain Putin launched an unprovoked war of aggression.

Ankara hosted the foreign ministers of Russia and Ukraine in Antalya earlier this month. Foreign Ministers Sergey Lavrov of Russia and Dmytro Kuleba of Ukraine met for talks in the Turkish resort town of Antalya, which Çavuşoğlu also attended. The talks were largely inconclusive, but Ankara considers the fact that they took place at all a success.

Maintaining its neutral and balanced stance, Turkey continues its diplomatic efforts to de-escalate the Ukraine conflict, urging all sides to exercise restraint. While Ankara has opposed international sanctions designed to isolate Moscow, it also closed its straits to prevent some Russian vessels from crossing through them.

NATO ally Turkey borders Ukraine and Russia in the Black Sea and has good ties with both. Since the beginning of the conflict, Ankara has offered to mediate between the two sides and host peace talks, underlining its support for Ukraine’s territorial integrity and sovereignty. Having recently called Russia’s invasion an unacceptable violation of international law, Turkey has carefully formulated its rhetoric not to offend Moscow, with which it has close energy, defense and tourism ties.

While forging close ties with Russia in a number of areas and relying heavily on Russian tourists, Turkey has sold drones to Ukraine, which angered Moscow. Turkey also opposes Russian policies in Syria and Libya, as well as Moscow’s annexation of Crimea. President Recep Tayyip Erdoğan has repeatedly said Turkey will not abandon its relations with Russia or Ukraine, underlining that Ankara’s ability to speak to both sides is an asset.