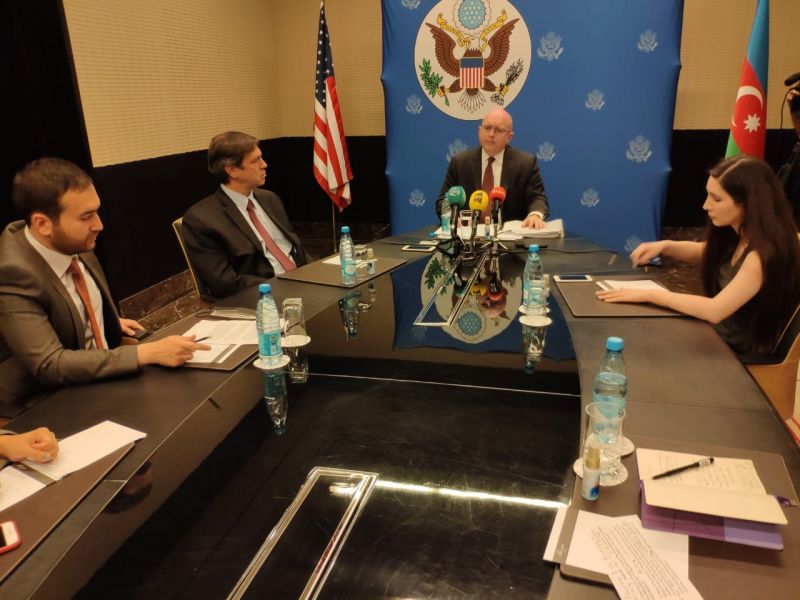 Reeker: The issues of the demarcation of troops, as well as energy and security were discussed

Negotiations about the priorities for the Unites States – energy and economic relations, human rights, and fundamental freedoms, as well as security in the region were discussed at a meeting with Azerbaijani President Ilham Aliyev on Tuesday, said Acting Assistant Secretary of State Philip Reeker, noting that the United States considers Azerbaijan a strategic partner, a press conference in Baku.

In particular, he mentioned the completion of the construction of the TAP gas corridor, which ensured the delivery of gas from Azerbaijan to Europe and ensure the energy security of this continent.

Touching upon the situation in the region, he expressed Washington’s concern over the situation on the Armenian-Azerbaijani border, the growth of tension and the capture of the Armenian military. He also called the death of Azerbaijani journalists, who were blown up by a mine, a sad event.

“Many lives have been lost in the conflict between Armenia and Azerbaijan and are very concerned about the possibility of a new escalation. Therefore, we urge both sides to urgently resolve issues of border demarcation in a peaceful way and withdraw troops from the border, “Reeker said.

The United States calls on both sides to start substantive negotiations as soon as possible under the auspices of the OSCE Minsk Group for a long-term solution to the conflict, Reeker said and added that the OSCE is the organization that is ready to help in resolving not only the conflict itself, but also its consequences, including humanitarian issues. He further mentioned the importance of human rights and fundamental freedoms, including civil society and independent media, which was discussed with Ilham Aliyev.

Answering the question of how the United States can contribute to the demarcation of the border between Armenia and Azerbaijan, Reeker said that the demarcation of the former borders within the USSR is important. It is also a technical process, and the US is ready to provide technical assistance in this. “We call on both sides to withdraw troops and begin the process of demarcation,” he said.

Is the Minsk group alive or dead? President Aliyev said that the conflict has been resolved and the Minsk Group can participate in the restoration of the liberated territories. Now, issues in the region are being decided by Russia, Turkey, and Azerbaijan. Turan agency asked the question “Do you agree with the opinion that the United States is on the sidelines?” Philip Reeker replied that Secretary Blinken and President Biden made it very clear that Washington intends to search a solution to the conflict between Armenia and Azerbaijan. The United States also intends to continue these efforts together with the rest of the MG members – Russia and France, Reeker said.

How does the United States view the strengthening of Turkey’s role in the region? To this question, Reeker said that Turkey is an ally of the United States and the issues of cooperation between the two countries will be in the focus of the upcoming meeting of Biden and Erdogan. “We have disagreements, but we are resolving them through diplomatic means,” he added.

How does the United States feel about Russia’s monopoly on peacekeeping in Karabakh? Asking this question, the American co-chair of the OSCE Minsk Group, Andrew Schofer, who was accompanying Reeker on the trip, said that the trilateral ceasefire declaration was signed by the parties who invited the Russian peacekeepers.

“We welcome the ceasefire and call on the parties to honor their commitments. This document assumes a five-year presence of peacekeepers. It is very important to use this time by both sides and establish a lasting peace,” said Sсhofer and added that other participants and forces may be involved in this process, but this is worth talking about in five years, he said.

This article originally appeared in TURAN INFORMASIYA AGENTLIYI on 08 June 2021.