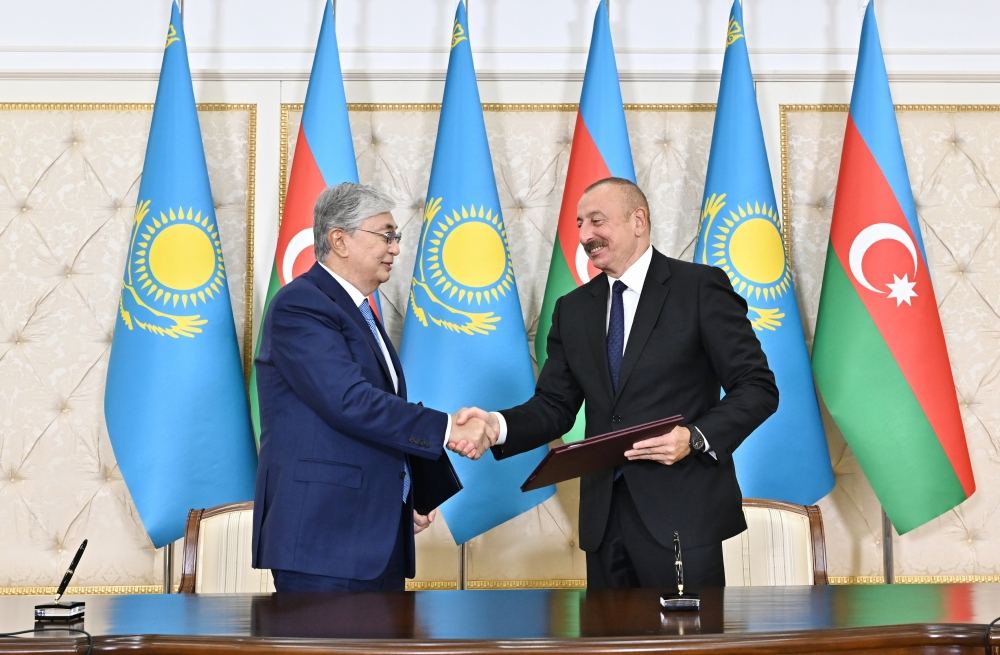 A fundamentally new stage is coming in relations between Kazakhstan and Azerbaijan, which will be based on the maximum synergy of the economic potential of the two countries. The visit of Kazakhstan’s President Kassym-Jomart Tokayev to Baku is a confirmation of the firm intentions of the Kazakh side, noted Kazakh economist Zhandos Temirgali, according to Azerbaijan in Focus, reporting Trend News.

Very soon, on August 27, a 30 years anniversary of the establishment of diplomatic relations between independent Azerbaijan and Kazakhstan will be marked. However, relations between the two kindred peoples are rooted in ancient times, up to the existence of the Oguz state in the south and west of modern Kazakhstan.

It is noteworthy that, having gone through various difficult periods, including the flourishing of statehood, fragmentation and colonization, the two Turkic states from the western and eastern shores of the Caspian Sea are today in similar stages of their development. Both post-Soviet countries traditionally pursue an open foreign policy, striving for modernization and active participation in world economic processes. An important factor is the comprehensive support of Turkic integration within the framework of the Organization of Turkic States (OTS) and TURKSOY, in which both countries are co-founders.

It should be noted that the potential of bilateral economic cooperation is truly extensive. It is gratifying that over the past 7 years a steady trend in the growth of trade was observed, which in the first 5 months of 2022 reached $164.1 million, growing more than 3 times compared to the same period in 2021. In total, last year the volume of trade between Azerbaijan and Kazakhstan amounted to $332.2 million, which is significantly higher than not only the pandemic year of 2020 ($109.2 million), but also in 2019 ($229.60 million). Thus, the goal of $1 billion in trade turnover set by the President of Kazakhstan for the coming years seems to be quite feasible, taking into account the existing dynamics and potential.

According to official statistics, more than 500 enterprises with Azerbaijani capital are registered in Kazakhstan, and in Azerbaijan, respectively, more than 140 enterprises are with Kazakh participation. The main areas of activity are trade, agro-industrial complex, construction, transport and logistics.

The real locomotive of bilateral cooperation should be the transport and logistics industry, namely the joint development of trans-Caspian transcontinental cargo transportation. First of all, we are talking about the Trans-Caspian International Transport Route (TITR), which is called the “Middle Corridor” in the world. This route connects the largest markets of Eurasia, China (Southeast Asian countries) with the European Union, passing through the territory of Kazakhstan, the Caspian Sea, Azerbaijan, Georgia and Turkey.

The relevance of TITR is confirmed by statistics. For the period of January-July this year, the volume of cargo transportation amounted to 845,200 tons, an increase of 171 percent compared to the same period last year. In particular, the volume of container traffic amounted to 17,600 TEUs, an increase of 33 percent. Over the past 5 years, from 2017 to 2022, more than 3.9 million tons of cargo have already been transported via this route through the Baku-Tbilisi-Kars railway. The total throughput of TITR is currently estimated at 5.8 million tons per year, or 80,000 containers, and will be further increased.

Among the main advantages of the New Silk Road, the high speed of delivery and low complex risks can be singled out. TITR allows delivering goods from China to Turkey in 10-12 days, and from China to the EU in 14 days. For comparison, shipping by sea can take 3-4 times longer. In addition, in the context of a dynamically changing international geopolitical situation, the Middle Corridor should become a reliable and safe route that passes through politically stable states that are friendly to each other and to the world.

Of course, there is still a lot of work ahead to develop and modernize the New Silk Road. In particular, we are talking about investments in the development of modern multimodal transport infrastructure, an increase in rolling stock and cargo ships and ensuring the “seamlessness” of transportation through the introduction of digitalization and the harmonization of tariff policy. These measures will reduce costs and increase the commercial attractiveness of the route. The opening of the Zangazur corridor should also give considerable impetus to TITR.

Trans-Caspian routes are not limited to rail and sea transportation. The development of the route for transporting energy carriers to world markets (including through the Baku-Tbilisi-Ceyhan oil pipeline), as well as the so-called. “Digital Silk Road”, a network of broadband fiber-optic cables stretched from Asia along the bottom of the Caspian Sea to Europe, allowing the creation of modern digital infrastructure in the South Caucasus and Central Asia.

In general, the development of transcontinental routes will require from the neighbors in the Caspian Sea, Kazakhstan and Azerbaijan, joint efforts to position and promote this route on the investment map of the world in order to attract investments from large international players who have the technology and capital to develop the existing colossal economic potential.

Thus, today it is obvious that the western and eastern shores of the Caspian Sea are becoming closer than ever to each other, connecting the entire continent. And along with this, two mighty strongholds of the Turkic World – Azerbaijan and Kazakhstan.