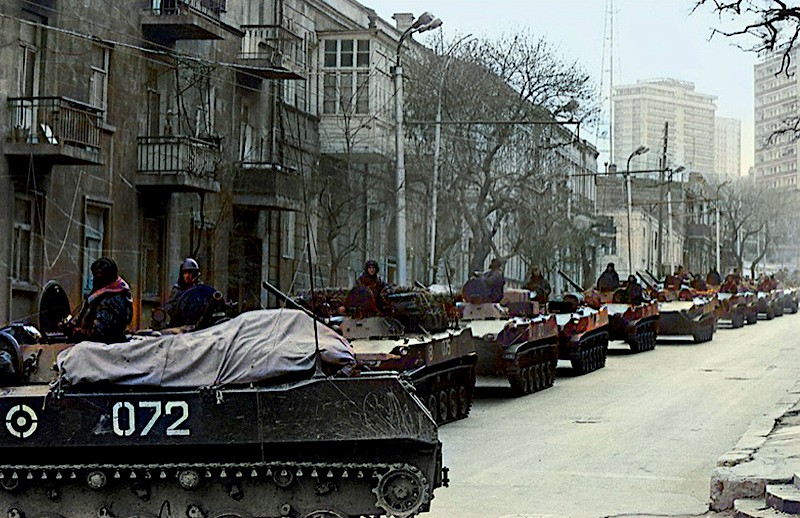 On January 20, 2021, we honor the 31st anniversary of what is known as “Black January’’, a day when over 26,000 Soviet troops stormed Azerbaijan’s capital city of Baku and committed a brutal massacre upon the civilian population, killing and wounding hundreds of men, women, children and the elderly.

Black January was preceded by a series of events with tragic repercussions for Azerbaijan and the region. In 1987, anti-Azerbaijani pogroms broke out in Armenia. Armenian mobs, supported by officials in Yerevan, attacked Azerbaijani-populated villages, killing hundreds of innocent civilians. Their designs of turning Armenia into an “Azerbaijani-free” country were soon realized, as over 250,000 Azerbaijanis, the country’s largest ethnic minority, who had lived in Armenia for millennia, were forced to flee their ancestral lands, becoming refugees in Azerbaijan. 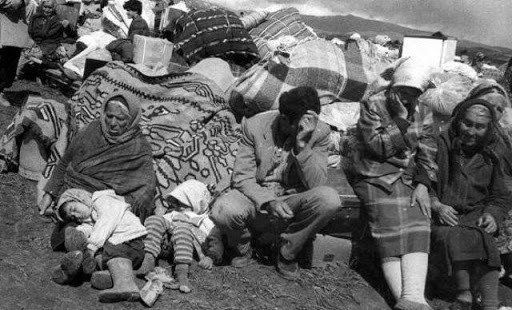 Meanwhile, Armenia raised groundless territorial claims against Azerbaijan, launching a wave of violence that would result in a painful war between the two nations. All these injustices, backed by pro-Armenian Soviet leadership in Moscow, caused public outrage in Azerbaijan and led to mass anti-Soviet demonstrations in Baku, which soon turned into a national freedom movement. This powerful movement for freedom was recognized by Newsweek, which used a photo of one of the demonstrations in Baku as a cover for its December 1989 issue titled “Standing Up for Freedom. PEOPLE OF THE YEAR”.

31 years ago, on 19/20 Jan. 1990, 26,000 #Soviet troops stormed #Baku to crush #Azerbaijani people’s freedom movement that had become so unprecedented in #USSR that @Newsweek had used a photo of #Azerbaijan’i protestors for its Dec. 1989 cover titled “People of the Year” #OTD pic.twitter.com/3zHV5DQBF7

The movement made the Soviet leadership tremendously nervous. By invading Baku and killing peaceful demonstrators they wanted to instill terror in any nation that dared to challenge the hopeless grip of Soviet tyranny. In its report “Black January in Azerbaijan,” the Human Rights Watch stated: “Indeed, the violence used by the Soviet Army on the night of January 19–20 was so out of proportion to the resistance offered by Azerbaijanis as to constitute an exercise in collective punishment. …the punishment inflicted on Baku by Soviet soldiers may have been intended as a warning to nationalists, not only in Azerbaijan but in the other republics of the Soviet Union.” 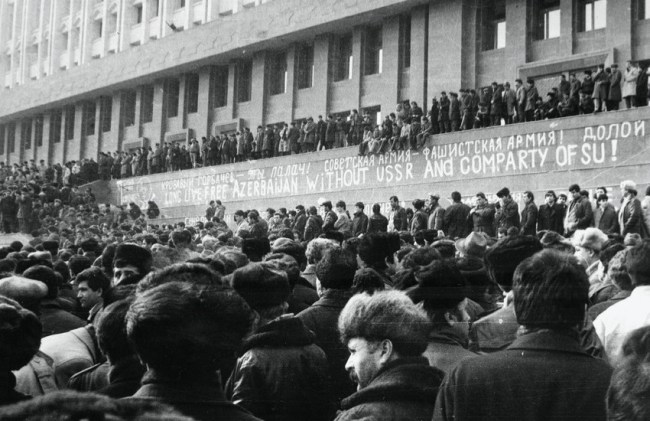 “Long Live Free Azerbaijan Without USSR and Comparty of SU!” reads the writing on the wall of a government building in Baku, Azerbaijan in protest to Soviet brutality. January 1990

Soviet leader Mikhail Gorbachev hoped that the brutality of Black January would make Azerbaijan relinquish its fight for freedom. But his crime led to one of the most powerful demonstrations of human perseverance in modern history. In the immediate aftermath of the attack, as literal blood and slain bodies soaked the streets, a strict and threatening Soviet curfew was enacted, promising a more horrific response if it were violated. Despite that, over 1 million Azerbaijanis took to the streets of Baku, literally flooding them, to demonstrate as a bold collective against the insanity of terror and tyranny and to honor and mourn the victims of the bloodshed. 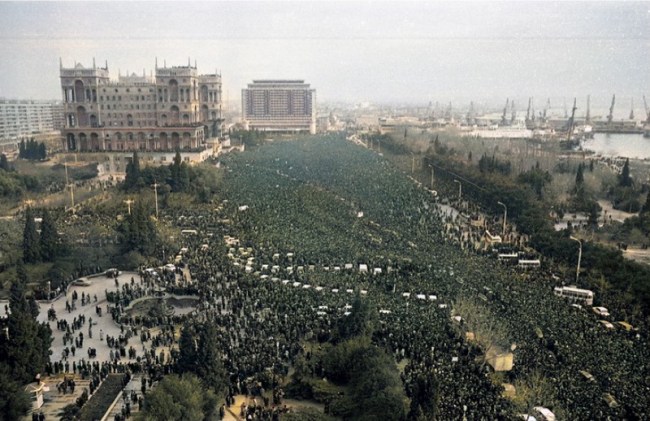 A million Azerbaijanis gathering in Baku’s main square (back then ‘Lenin Square’, now ‘Freedom Square’) in January 1990, carrying the coffins of Black January’s victims and condemning the Soviet savagery

Muslim, Jewish and Christian faith leaders held public prayers together, as a message of our shared faith, hope, and the indomitability of our values. 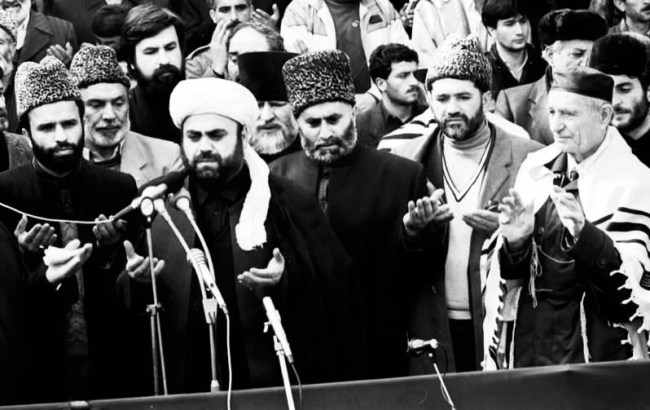 Heydar Aliyev, who would later become the founder of modern Azerbaijan, came to Azerbaijan SSR’s office in Moscow and fiercely denounced the bloodshed. His defiance helped to inspire the Azerbaijani people and Aliyev became a leader of the struggle for liberty.

Thus the Soviet brutality backfired, and in October 1991, Azerbaijan fully regained freedom from Soviet rule and oppression. Because of that, this year we also celebrate the 30th anniversary of restoration of Azerbaijan’s independence.

Azerbaijan was one of the first nations to assert post-Soviet independence, and we have a history of firsts when it comes to our independence. Azerbaijan was originally declared as a democratic republic in May 1918 and celebrated two years as the first and sole democracy in the Muslim world, before its Soviet invasion in 1920. The key ingredients to our drive and success as a nation have been our rewarding approach to multiculturalism, a value system and practice that dates back millennia. Azerbaijan has been the home to a uniquely diverse population of Muslims, Christians and Jews, and has maintained domestic tranquility across the centuries because, unlike most of the world throughout most of time, Azerbaijan proactively protects and celebrates diverse faiths and cultures. Those standards have influenced the course of our history and have set the stage we stand on today.

Since the restoration of independence, Azerbaijan has gone from strength to strength. Under the visionary leadership of President Ilham Aliyev, Azerbaijan is now economically dynamic, politically stable, and an important geopolitical power. It is the biggest economy in the South Caucasus, and one of the biggest in the whole of the former Soviet Union. International investors have been attracted by the country’s business climate, and Azerbaijan is the centerpiece of the Caspian oil and gas developments, vital for global energy security, as well as other regional mega-projects.

Our values have seen us through hard times, even in very recent months. Just this past autumn, Azerbaijan liberated its territories from Armenia’s nearly 30-year-long, illegal, U.N.-condemned occupation. This will allow for over a million forcibly displaced Azerbaijanis to finally return home. We now begin the process of rebuilding and returning, and with peace finally achieved, the strength and vitality of our independence, and the values that led us there, are strong and invigorated, ready to take on the challenges of a new decade, in all their complexity.

Remembering Black January in 2021 is important, not only in memorial of the victims, in recognition of the human tragedy and unthinkable brutality, but especially in the message of perseverance. Today, our entire world faces upheaval, of a kind most of us have not seen in our lifetime. Yet the values that have kept an entire nation strong, despite enduring profound tragedy and hardship, are the same values that can propel our world today, as we endure the uncertainty and tribulations of a truly global pandemic. Today, as we experience such an extreme and lasting interruption from what we know as normal life, it is crucial that we hold close the principles of acceptance and tolerance that have shown throughout time to be the ingredients for survival, recovery, and peace.

This article originally appeared in Medium on 20 Jan 2021.