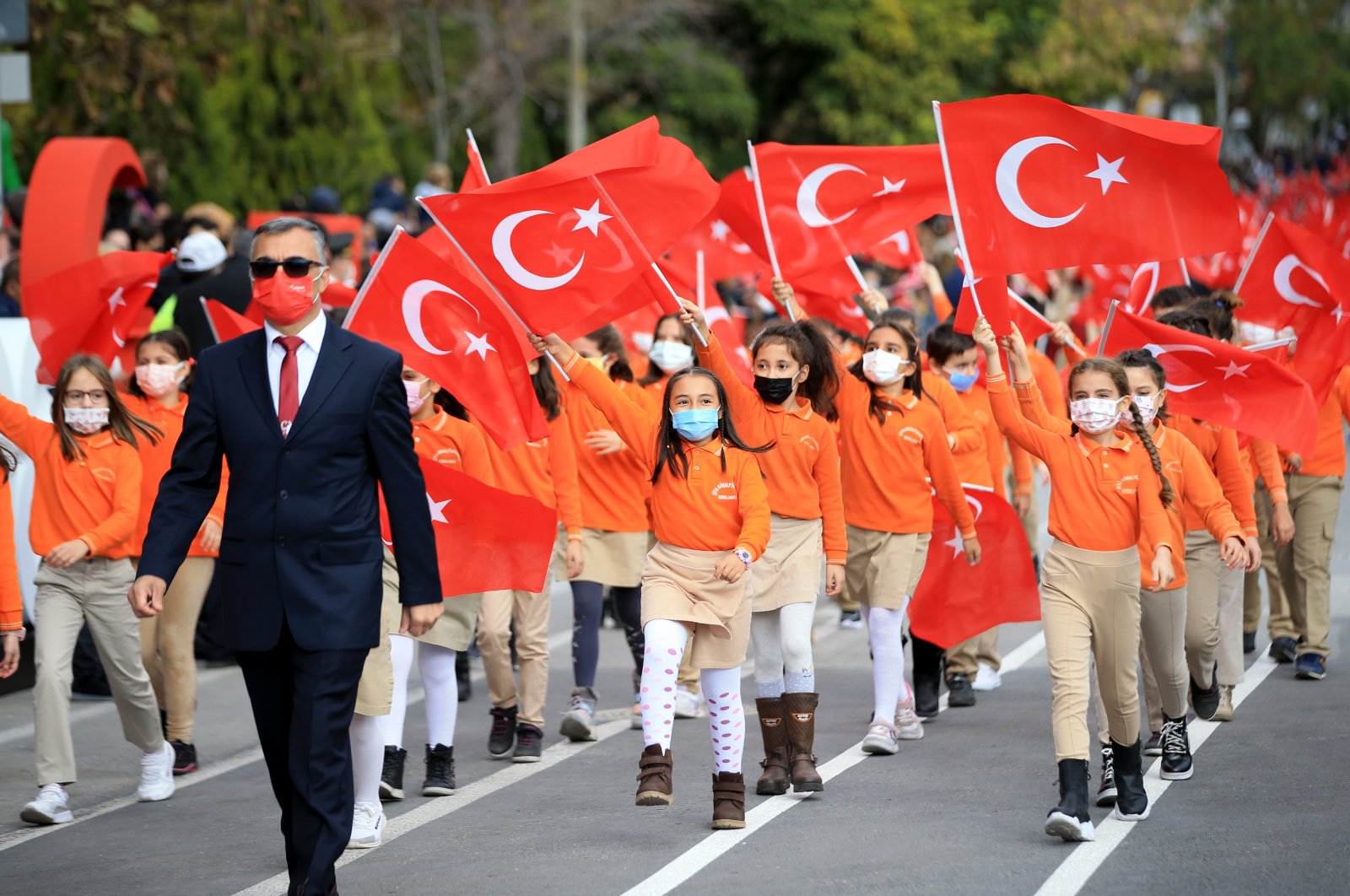 Turkey on Friday marked the 98th anniversary of Republic Day, with high spirits and splendid celebrations in 81 provinces

From the quiet depths of Lake Van in the east to the vibrant streets of Istanbul in the west, Republic Day celebrations were everywhere on Friday in Turkey. The 98th anniversary of the establishment of the republic is marked as a national holiday. The occasion symbolizes the country’s foray into a new system and cementing its independence after the devastation of World War I.

Celebrations, mixed with solemn tributes to the republic’s founder Mustafa Kemal Atatürk, began with an official ceremony in the capital Ankara. President Recep Tayyip Erdoğan and senior officials paid a visit to Atatürk’s mausoleum Anıtkabir. Signing a memorial book at Anıtkabir, Erdoğan stressed his determination to achieve the 2023 goals, when the republic is due to celebrate its centenary.

“As members of a heroic nation with a glorious past that is full of victories, we are determined to propel the republic to its 2023 goals,” Erdoğan wrote, in reference to a set of development goals the government put forward. The president will later accept Republic Day greetings at the Presidential Complex.

Republic Day is being celebrated across Turkey, across the world by representatives abroad and in the Turkish Republic of Northern Cyprus. The government ceremony in Ankara will be accompanied by various events, including concerts, parades and fireworks across the country.

The main staple of the celebrations were parades, both on Thursday night and on Friday morning. Soldiers attending these parades were the main attraction.

In country’s largest lake Van, a group of divers braved ice-cold waters and unfurled a giant Turkish flag to mark the day. In the western city of Izmir, thousands of balloons painted with Turkish flags and pictures of Atatürk were released into the air after an event. In Istanbul, thousands marched on the streets on Thursday night for traditional night-time parades while the day was marked with more parades on Friday, when the major roads in the city were shut down for celebrations.

Though measures against the coronavirus pandemic are still in place, this year’s celebrations were more crowded in all provinces.

On Oct. 29, 1923, Atatürk officially declared the name of the nation and proclaimed the country’s status as a republic. A vote then took place in the Grand National Assembly, and Atatürk, a revolutionary statesman, was elected the first president of the Republic of Turkey by unanimous vote.

Since then, Turkey has celebrated Republic Day on Oct. 29 annually.

President Erdoğan on Thursday published a congratulatory message to mark 98th anniversary of the Turkish Republic, which is celebrated on Oct. 29. “I congratulate our citizens, living at home and abroad, and all our friends, who share our pride on this day, which is one of the golden links of our glorious history, on the occasion of Oct. 29 Republic Day,” Erdoğan said in a video message. The president also commemorated with gratitude Mustafa Kemal Atatürk and his “gallant brothers in arms, who ensured victory in the Turkish War of Independence … wishing Allah’s mercy upon our august martyrs who entrusted these lands to us at the cost of their lives.”

“While the centennial of our Republic (in 2023) has now been clearly sighted on the horizon, we will not allow any power, any dirty scenario or any insidious attack, which seeks Turkey stumbling, to deter us from our path. We as the nation will firmly hold onto our unity, solidarity and brotherhood, which are our biggest assurances, and endeavor to achieve our cause of a great and strong Turkey. The steely will, which carried the national struggle to victory and brought our Republic into existence, will continue to be our guide in this sacred struggle we have been putting up, as has been the case for the last 98 years,” he said.

“Our longstanding relationship is built upon strong commercial, diplomatic and security cooperation,” Blinken noted. “The incredibly deep, people-to-people ties between Turkey and the United States have persisted for generations and are critical to the strength of our relationship.” “We send best wishes as you celebrate this special occasion and look forward to expanding our partnership in the years to come,” he added.

Turkey’s historical accomplishments serve “to inspire many nations and encourage them to adopt the principles of state-building that Turkey has achieved,” said Amreyev. “Preparing to welcome the centennial of its foundation (in 2023), Turkey has already taken its rightful place as a strong country in the international political arena with its farsighted and peaceful foreign policies, as well as successful economic, political and social development, built upon progressive reforms,” he added.

The secretary-general also expressed his gratitude to all the institutions of the council’s host country Turkey, “who have always provided the strongest support for the unity and solidarity of the Turkic world, initiated the meetings held for this purpose before and during the establishment period of the Turkic Council, and strengthened our Organization by not only hosting the Turkic Council Secretariat but also extending all its means to achieve our activities and undertakings.”

This article originally appeared in DAILY SABAH on 29 Oct 2021.