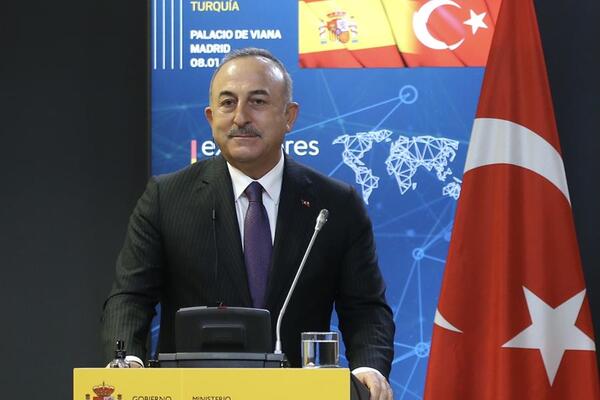 Finding ways to resolve the differences between Turkey and the U.S. is an urgent necessity not only for bilateral relations, but also for transatlantic cooperation, Turkey’s top diplomat said on Jan. 8.

“Turkey values ​​its deeply rooted relations with the United States. We have an alliance that has stood the test of time and has been instrumental in shaping the transatlantic political landscape,” said Foreign Minister Mevlüt Çavuşoğlu, speaking to Spanish news agency EFE during a visit to Madrid.

Çavuşoğlu noted that Ankara and Washington currently disagreed on a number of significant issues, especially concerning Turkey’s national security, such as the U.S.’ aid to the PKK/YPG terrorist group, its inaction against FETÖ and its sanctions against Turkey.

He expressed Turkey’s appreciation for President-elect Joe Biden’s visit to Ankara during his vice-presidency under the Obama administration after a coup attempt on July 15, 2016 by FETÖ, showing his solidarity with the Turkish government and nation.

“Thus, we hope that this first-hand experience of the danger posed by this terrorist organization will allow the new US administration to take urgent and concrete action on FETÖ and its leader,” Çavuşoğlu said.

“But above all, we hope that you, the new U.S. administration, recognize the strategic importance of Turkish-American relations and take the necessary steps to increase its full potential. The way to do this is to address our differences through dialogue and diplomacy, as allies do,” he added.

Çavuşoğlu said that a good first step to do this would be to remove the Trump administration’s sanctions against Turkey imposed under the Countering America’s Adversaries Through Sanctions Act (CAATSA).

On Dec. 14, the U.S. imposed sanctions on Turkey over its acquisition of the Russian S-400 missile defense system.

In April 2017, when its protracted efforts to buy an air defense system from the US proved futile, Turkey signed a contract with Russia to acquire the state-of-art missile shield.

U.S. officials have voiced opposition to their deployment, claiming they would be incompatible with NATO systems and would expose F-35 jets to possible Russian subterfuge.

Turkey, however, stressed that the S-400s would not be integrated into NATO systems, and poses no threat to the alliance or its armaments.

“There is no place for threats or sanctions among allies. These sanctions, whatever the purpose or basis, is a direct insult to Turkey’s sovereignty,” Çavuşoğlu added.

Çavuşoğlu emphasized that Turkey is a prominent NATO ally and contributes to the alliance’s efforts to fulfill fundamental tasks, especially on collective defense, crisis management and security cooperation.

“We are one of the top five contributors to the alliance’s missions and operations, and the eighth-largest contributor to the NATO common budget,” he said.

Çavuşoğlu added that NATO offers a solid basis for improving relations with the U.S., adding that the new administration should recognize Turkey’s importance within the alliance.

“We hope that the Biden administration will see this and engage with us in a meaningful dialogue that will help us return to our real agenda and begin to cooperate more effectively on a number of issues ranging from Syria to Libya,” he said.

“In this regard, the initial messages coming from the Biden administration regarding the importance of transatlantic relations and effective multilateralism, as well as the commitment to constructive cooperation with the Allies, are quite encouraging. Any step in this direction would benefit both our relations and the wider transatlantic community,” he added.