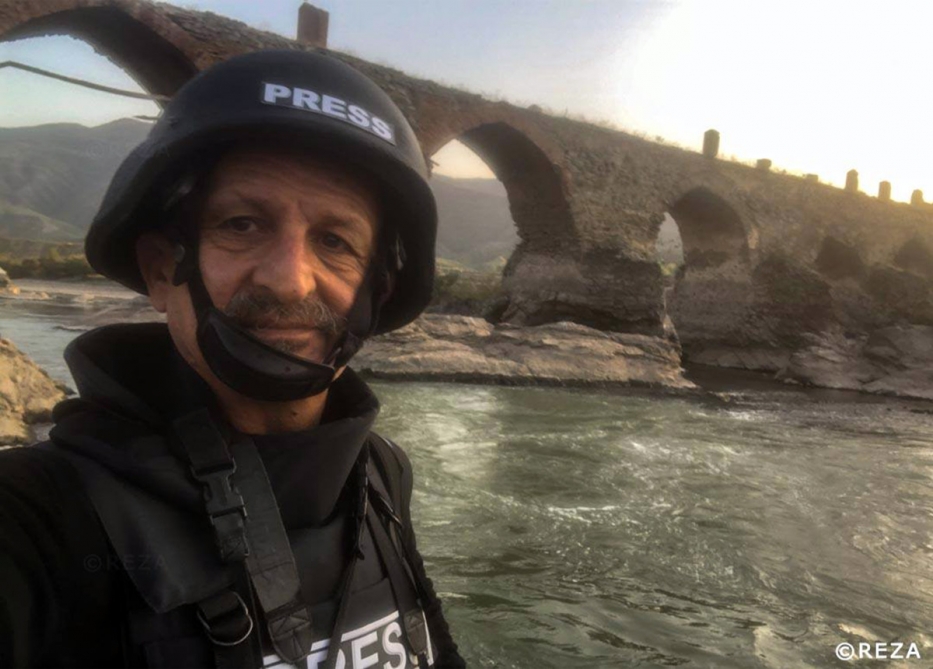 Reza Deghati (always known simply as Reza), the world-famous South Azerbaijani award-winning photojournalist and National Geographic Fellow, has been published in some of the world’s leading periodicals, including Time, Newsweek, Stern, El Pais and Paris Match. In Azerbaijan, he remains most renowned for capturing the iconic faces of the victims from the original Armenian–Azerbaijani Nagorno-Karabakh conflict from 1988–94 and particularly the Khojaly Genocide. Following the recent Armenian capitulation, he travelled to Azerbaijan again. ‘Azerbaijan in Focus’ is pleased to reprint this interview with Reza, conducted by AzerTac.

We called Reza Deghati several times. The phone was busy. Then he called back. He said he was on his way to Karabakh. We agreed that he would answer our questions via WhatsApp:

Reza, the world-famous photojournalist who came to Azerbaijan from Paris during the fateful days of the first Armenian–Azerbaijani conflict, has long communicated the realities of Karabakh to the world through the language of his art. He says the French media are not interested in sending a photojournalist to Azerbaijan. He was even offered an uncapped figure to go to Armenia in exchange for his services.

Originally from Tabriz, Reza bought a plane ticket with his own money and came to Azerbaijan to capture the historic days of the country through his lens. His photos are being widely circulated by TV channels, news agencies and news sites. Reza has always captured the events of Karabakh and other parts of the world during and after conflicts, given interviews to the media and been invited on various TV channels. In other words, there is not a minute of free time left. He answered our questions on the way to Fuzuli..

AzerTac: You have been in Azerbaijan for more than a month. Where did you go and what did you capture on camera?

Reza: I have been working in two directions: both in the liberated territories, and in Barda, Tartar, Ganja and other Azerbaijani cities that came under cluster munitions shelling from Armenia. As our soldiers advanced, I followed them…

Reza shared his new photos from the Khudafarin Bridge with the following caption: “Internally displaced persons (IDPs) from Jabrayil will see these places for the first time in 27 years”.

Sharing photos from the funeral of 16-year-old Orkhan Ismayilzade, a resident of the Terter district, Reza wrote: “Orkhan was killed as a result of the Armenian shelling of Terter while picking pomegranates in his garden. The red colour of the pomegranates sadly reminds us of his blood”.

Photos from the funeral of 7-year-old Aysu Isgandarova, who died during the bombing of Barda, are accompanied with the following comment: “When the bombing took place, she and her younger sister were collecting flowers”.

AzerTac: What do you feel when you see destroyed cities, villages and historical sites?

Reza: You know, I am actually an architect, and look at them through these eyes. I did not find a single structurally safe house in the villages I visited. There were only two mosques that were relatively safe. Pigs and cattle were kept in the ancient mosques in the Mamar village of Gubadli and Alkhanli village of Fuzuli. I took photos of all these…

Photos with the caption ‘Mosque turned into a pigsty’ are also accompanied with the following comment: “I entered the mosque and looked around. The floor was covered with faeces and the smell was horrible. I saw two pots of water for the animals. The soldiers told me that when they entered the mosque, it was full of pigs”.

Reza wrote about a mosque in Fuzuli’s Alkhanli village: “The scene I saw here was not any different from what I saw earlier. Apparently the Armenians have a tradition of turning mosques into barns. This shows their attitude to Muslim places of worship”.

Reza commented that he heard that our liberated cities and villages were beautiful in the past and that, in his view, when these places are restored, it would be better to give preference to traditional style. For example, ancient villages have been preserved in Italy, France and Spain, and millions of tourists visit them. The Karabakh region could be the same.

Reza is currently sharing thousands of photos he took in Karabakh and other parts of Azerbaijan on social media. His work speaks of the realities of Azerbaijan through the language of photos, which is comprehensible to everyone.

AzerTac: You live in France, where the Armenian lobby is strong. Have you experienced any pressure, persecution or obstacles?

Reza: I have lived in France for 40 years. I am a citizen of this country. Since 1992, I have been trying to communicate the Khojaly Tragedy and the issue of the IDPs to the world, and I have been the target of the Armenian lobby. For example, they came to my exhibitions and tore up the photos displayed there. Once, just a few hours before the opening of the exhibition, some obscenities were written on all the pictures.

When I spoke at conferences, they shouted that I was a representative of the Azerbaijani government. They write a lot against me on the internet. The Armenian Ambassador to France once invited me to a conversation in Paris. Ministers, diplomats and ambassadors working in this country usually have respect for artists of other nationalities. There was a time when, for example, the French President invited me to sit next to him during lunch at an event. When the Armenian Ambassador to France invited me to dinner, I asked him for the subject of our conversation. He said he liked my photos.

In those days, a large exhibition of my photos was underway near the French Parliament in Paris. There was a famous photo from Khojaly in that exhibition – a photo I took of a woman screaming after finding the bodies of her son and husband with their eyes hollowed out. The Armenian Ambassador tried to intimidate me and turn me away from my path by saying that there were 500,000 Armenians in France and I was alone. He even said: “You are originally from Tabriz and Armenia has very good relations with Iran and Iranians, so work with us.”

I objected. I said that, as a photojournalist, I was responsible for telling the world what I saw, including the massacre the Armenians committed in Khojaly. I said that even if you were 5 million or 500 million, not 500,000, I would still tell the truth, and I stood up and left. The next day, they sent a man who tore up that famous photo at the exhibition. I left that stand blank and wrote that I was not being allowed to hold an exhibition in Paris, where everyone is supposed to be able to speak his or her mind.

So I posted this photo on my website and anyone can see it. I also posted other photos from the conflict on my website. The Armenian lobby also hired a lawyer to sue me, as another form of pressure is financial. Over the years, they have prevented me from implementing 20–30 projects. For example, any gallery in France would want to exhibit my photos, but such museums come under pressure and the exhibitions do not take place.

Reza has been travelling the world for over 40 years. He is the author of more than 30 books and has received a number of international awards. He was awarded the Honour Medal of the University of Missouri and is an Honorary Doctor of the American University of Paris. The French government has awarded him the Knight of the National Order of Merit. He has participated in 250 exhibitions, including Emigrant’s Thoughts and Crossroads of Destinies in Paris; One World, One Tribe in Washington D.C.; War + Peace in Normandy; and Hope in Doha.