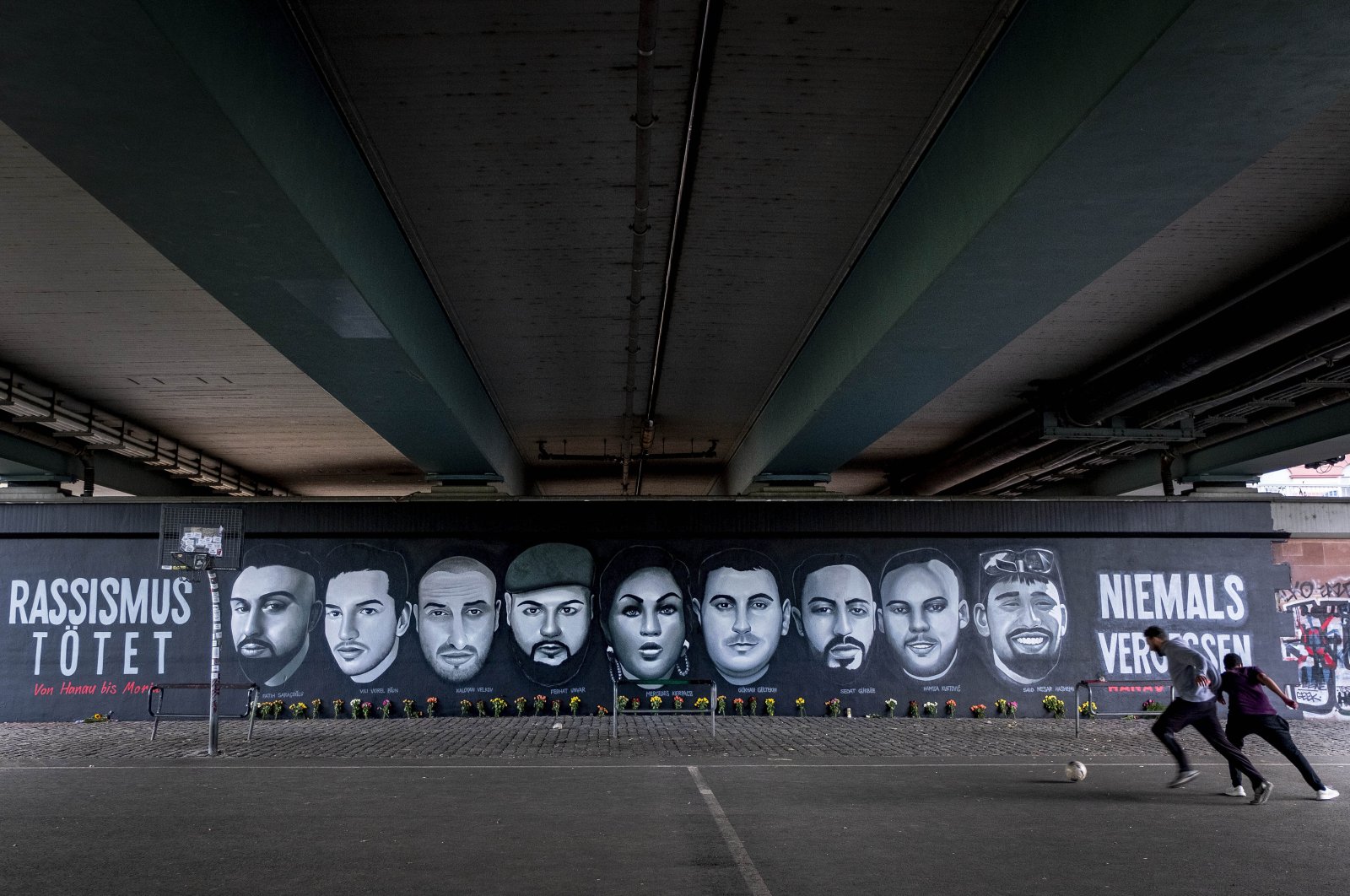 A boy and a man play football near graffiti depicting the nine victims of the Hanau shooting, under a bridge in Frankfurt am Main, Germany, June 20, 2020. (AP Photo)

The Turkish community in Europe is concerned with the rising trend of Islamophobia and Turkophobia in Western countries, calling on European states to escalate measures against hate crimes.

Kemal Ergün, the head of the Islamic Community National Vision (IGMG) based in Cologne, said that in 2020 alone, there have been 122 attacks on mosques in Germany. The year was particularly marked by the rising number of threatening and insulting letters sent to Muslims, he noted.

Ergün noted that between 2014 and 2020, there have been more than 700 mosque attacks in Germany, stressing the need for mosque attackers to be caught immediately.

“Some mosques are being attacked repeatedly. In some, the level of violence is higher with actions such as arson that can harm people, while in others, the walls of the mosques are being used as canvases to write insults and threats on,” Ergün was quoted as saying by Anadolu Agency (AA).

Ergün also mentioned the impact of terrorist attacks in Europe as a triggering factor in anti-Muslim racism on the continent.

“Unfortunately, the far-right groups, after terrorist attacks that are claimed to be done in the name of Islam, strengthen their anti-Muslim stance even further. The ones who are mostly influenced by this atmosphere are, individually, Muslim women and, institutionally, mosques,” he continued.

Germany has been recording Islamophobic crimes separately since 2017. In 2018, there were 910 incidents, including 48 attacks on mosques alone, a little lower than in 2017 with 1,095 crimes. In 2019, some 871 attacks targeted the Muslim community in Germany, while 2020’s data has not yet been announced. Every other day throughout the course of 2019, a mosque, a Muslim institution or a religious representative in Germany was targeted in anti-Muslim attacks. More than 90% of these were attributed to politically motivated crimes by the far-right.

Ergün stated that IGMG officials have demanded more effective investigations by security forces into these attacks and an end to the mosque assaults.

“So far, we have witnessed that the security forces have conducted a detailed investigation into mosque attacks. However, unfortunately, every attacker that cannot be caught continues to walk freely as a societal threat. Today, an attacker who broke a mosque’s window and somehow has been able to walk freely for months can increase the level of violence even further since they already surpassed a psychological threshold in their initial attack,” Ergün said. “In this respect, it should be realized that these mosque attacks are violent acts that interest not only Muslims but the entire society.”

Germany is home to 81 million people and the second-largest Muslim population in Western Europe after France. Of the country’s nearly 4.7 million Muslims, at least 3 million are of Turkish origin.

Durmuş Yıldırım, the head of the Turkish Islamic Union of Europe (ATIB), on the other hand, pointed to the fact that in the 60th year of Turkish workers’ migration to Europe, the racists in the West have gained strength and attracted a following based on anti-Muslim hatred, to the point of being represented in the Bundestag.

“The fact that there is an attack on the mosques nearly every day, as well as rising racism against Muslim migrants, is concerning us. I also would like to express that we do not approve and condemn the usage of Muslim migrants as an election tool,” he underlined.

Yıldırım stated that especially in 2020, with the revelation of Neo-Nazi far-right police officers within the German police, the criticism of the German state for failing to protect Muslims has been proven right.

Racist officers among Germany’s police force intentionally target Turkish people and other minorities in what they call “Turk hunts,” according to a November 2020 study on racism and police violence in the country. The research carried out by professor Tobias Singelnstein of Ruhr-University Bochum revealed that there is a structural problem among the German police, with reports of racist, Islamophobic and anti-Semitic insults confirmed by police officers and victim testimonies.

“Some officers intentionally go on searches to hunt Turks,” one of the officers interviewed as part of the study said, adding that they search out and target Turkish people for the most minor mistakes like not signaling and provoke them to react against the police.

“While some populist politicians continue to spread hate toward the Muslim foreigners, discriminative policies against the migrants have resumed as well,” he said, emphasizing that the security of mosques and Muslims in the West is the responsibility of the Western authorities.

Yıldırım underscored that Turks and Muslims are now a part of Europe and determined to live side by side with Westerners.

“This is our homeland as well. So, we have to live together. And everyone should do their part on making this possible,” he said.

Racist attacks targeting Muslims or immigrants increasingly make the headlines as white supremacists become more efficient in an age where their ideals, or at least parts of them, are going mainstream. There is no single large group orchestrating these attacks against Muslims and immigrants. Rather, individual attacks lead to more attacks by copycats.

The tolerant political climate under the pretext of freedom of speech has helped far-right sympathizers with violent tendencies expand their support.

“In last five to six years, unfortunately, the hatred against Turks and Muslims has reached scary points,” said Bülent Bilgi, the head of the International Democrats Union (UID).

In Bilgi’s opinion, apart from the increasing number of refugees and migrants, the worsening economic conditions during the pandemic have also triggered anti-Muslim hatred in Europe.

“With the suspicion of misusing the state aid provided in the pandemic, masked polices raid mosques. This is not a confirmed claim, but there are many examples that are rumored around such as this. The raids in France aim to menace the people. However, the duty of the governments is not to menace but to come up with solutions through dialogue,” he said.

Islamophobia is being disguised as secularism in France, a French opposition leader had said in criticism of the Emmanuel Macron-led government, which has recently come under fire for policies against French Muslims.

“There is hatred toward Muslims under the guise of secularism in this country. Secularism does not mean to hate a religion,” Jean-Luc Melenchon, leader of the left-wing France Unbowed movement and a parliamentarian from Bouches-du-Rhône, a Mediterranean region with a large Muslim population, told the BFM-TV channel in November. His remarks come after recent anti-Islam statements by Macron and other politicians. Macron described Islam as “a religion in crisis” and announced plans for tougher laws to tackle Islamic “separatism” in France.

“There is an attempt at forming French Islam, German Islam. We, of course, are against these attempts. There has never been an Arabic or Turkish Islam so there cannot be a European Islam as well,” Melenchon said, noting that there is only one Islamic religion.

Under the pretext of the “Islamization” of the countries they live in, racist terrorists switched from attacks on mosques to mass killings. Anders Behring Breivik, who slaughtered 77 people in July 2011 in Norway, is viewed as an inspiration for more attacks that followed. Four years later, Anton Lundin Pettersson, harboring similar views as Breivik, killed four students with immigrant backgrounds in Sweden. In 2016, 10 people were killed in Germany’s Munich in another racist act of terrorism. On Feb. 19, 2020, in the German town Hanau, Tobias Rathjen, a terrorist harboring racist views, gunned down nine people of immigrant backgrounds, including five Turkish nationals, before killing himself. The Hanau attack ignited the debate over the seriousness of far-right terror threats often ignored by authorities. It was one of the worst acts of terrorism with racist motives in recent memory.

The head of Turkish Hearths in the German town of Bruhl, Aydın Parmaksızoğlu, however, underlined that there has always been a phobia against the words “Turk” and “Islam” in Europe and Germany, “to the point that the German authorities were constantly monitoring the associations with the words, Turk and Islam, in their names, while others were being able to skip the monitoring process. Even this proves the phobia against Turks and Islam,” he said.

Noting that the German constitution actually provides all the necessary bases for every religion and culture to live freely in the country, Parmaksızoğlu stated that still, since racism emerges within the minds of people, it can be encountered in any institution at any time.

“If Germany does not fight against the radical groups, Europe may soon lose its peaceful environment. Germany needs to get rid of not only foreign radicals but also radicals within German society. This is the main issue,” he underscored.

Turkish officials, including President Recep Tayyip Erdoğan, have frequently urged European decision-makers and politicians to take a stance against racism and other types of discrimination that have threatened the lives of millions of people living within the bloc’s borders.

This article originally appeared in DAILY SABAH on 04 Jan 2021.