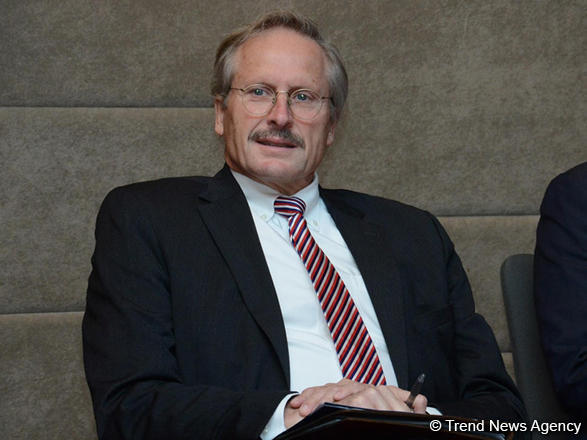 Robert Cekuta: The U.S. can play a role in achieving peace between Azerbaijan, Armenia

The U.S. can play a role in achieving peace between Azerbaijan and Armenia, Former US Ambassador to Azerbaijan Robert Cekuta noted on the sidelines of the VIII Global Baku Forum titled “The World after COVID-19″, according to Azerbaijan in Focus, reporting Trend News.

“This is actually something which I have been working on in this region. We had decades of conflict [Karabakh conflict between Armenia and Azerbaijan]. And there are decades of hard feelings on both sides, and the question now is how do we overcome this. This is something President Ilham Aliyev talked about in his remarks this morning, his willingness and determination to move forward towards peace,” Cekuta noted.

“I think that’s something that the U.S. can play a role in,” he said.

“I think that people in Washington right now are looking at the idea of how can we help Azerbaijan and Armenia build peace for future. It is not gonna happen immediately. This is hard, but it can happen. The demarcation of borders is the issue that should be addressed as part of the peace process,” he added.

Organized by the Nizami Ganjavi International Center under the patronage of Azerbaijani President Ilham Aliyev, the VIII Global Baku Forum under the motto “The world after COVID-19” has today kicked off.

The VIII Global Baku Forum brings together high-level representatives, including former heads of state and government, officials of international and non-governmental organizations from more than 40 countries, as well as other distinguished guests, to discuss issues of global importance.