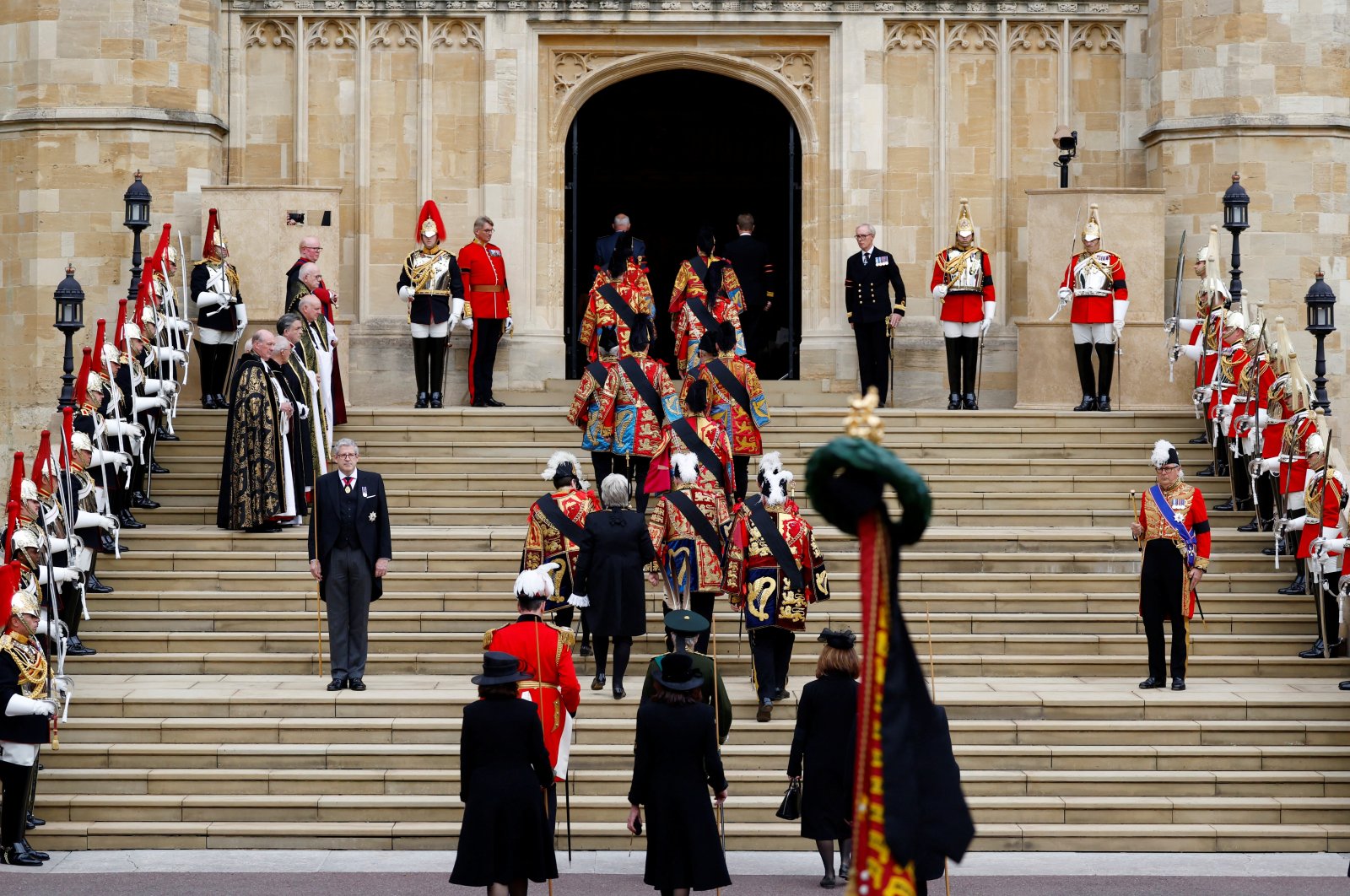 The British royal family came together to say their final goodbyes to Queen Elizabeth II at Windsor Castle, the monarch’s final resting place, after her funeral drew to a close at London’s Westminster Abbey earlier Monday, according to Azerbaijan in Focus, reporting Daily Sabah.

Following the majesty and pomp of her state funeral, a smaller congregation gathered at St. George’s Chapel on the castle grounds to pay a more personal goodbye before the queen was buried alongside her husband Prince Philip, the Duke of Edinburgh.

Prince Philip’s coffin has been stored in a royal vault since he died in April 2021 so that he can be buried beside the queen at the chapel alongside other members of the royal family.

The royal hearse carrying the sovereign’s body arrived at the castle at 3:40 p.m. after a 25-mile (40-kilometer) drive west from London, entering its gates to applause and tears among the huge crowd that had gathered since early morning.

The queen’s beloved corgi dogs were also there to witness part of the ceremony, with Muick and Sandy brought into the quadrangle on leads when the late sovereign’s hearse arrived at the castle.

Meanwhile, Emma the Fell Pony, owned by Queen Elizabeth for 26 years, was stood in a gap in the grass at the side of the Long Walk – the approach to Windsor Castle – which was covered in a sea of hundreds of thousands of floral tributes.

The queen, who died on September 8 aged 96, moved with her late husband Prince Philip to the castle in early 2020, as the coronavirus pandemic began, and spent most of her time there.

Inside, her coffin was taken by the castle’s manicured walkways, freshly mowed lawns, and thousands of bouquets left by well-wishers from around the world.

Her eldest son and successor, King Charles III, his heir William and second son Harry followed behind the coffin as it slowly made its way towards St George’s Chapel.

Red-jacketed Grenadier Guards carried the heavy lead-lined oak casket through the great doorway of the chapel and its crowded nave, where many mourners bowed their heads in respect.

A choir sang the coffin to its catafalque, which was draped in purple velvet.

The Dean of Windsor David Conner, who led the ceremony, hailed Elizabeth’s “profound Christian faith” that “bore so much fruit.”

“Fruit, in a life of unstinting service to the nation, the Commonwealth, and the wider world,” he added.

‘God Save the King’

The queen was personally involved in planning many details of the ceremony, including the music.

It was mainly composed by William Harris, the chapel’s organist between 1933 and 1961, whom the palace said taught the young Elizabeth to play the piano.

Before the final hymn, the royal scepter and orb as well as the imperial crown – symbols of the British monarchy’s spiritual and temporal power – were removed from the coffin and placed on three red cushions on the altar.

Charles then covered the coffin with the official flag of the Grenadier Guards.

The Lord Chamberlain – the most senior official in the royal household – broke his “wand of office,” a highly symbolic gesture signifying the end of Elizabeth’s reign.

The ceremony, which lasted around an hour, closed with another rendition of “God Save the King,” the reworded national anthem.

For the first time in his life, Charles does not have to sing it. He stood straight, staring straight ahead as he had done all day.

But as the coffin of his “darling mama” was lowered into the Royal Vault, he blinked and bit his lip.

Earlier he had placed a hand-written note on top of her coffin reading:

At Westminster Abbey earlier in the day, state trumpeters from the Household Cavalry sounded the “Last Post” following Archbishop of Canterbury Justin Welby’s commendation over the queen’s coffin and a blessing pronounced by the dean.

Two minutes of deafening silence followed across the country before “Reveille” was sounded by the trumpeters, while the national anthem was sung by the congregation.

Charles looked very emotional during the singing of the anthem, remaining silent during the song, while his siblings and members of the royal family sang along.

Gripping his ceremonial sword, Charles looked downcast as he stared straight ahead while a piper played “Sleep, Dearie, Sleep.”

A lament was played by the sovereign’s piper as her coffin was carried out of Westminster Abbey to be placed on the State Gun Carriage.

The strains of the lament could still be heard echoing through the abbey as the piper walked off.

Shortly after, as the organist played Bach’s “Fantasia in C minor,” soldiers of the bearer party entered from the South Quire Aisle.

As the bearers moved slowly through the abbey to place the coffin once more on the gun carriage, they were followed in procession to the Great West Door by the King and Queen Consort along with other members of the royal family.