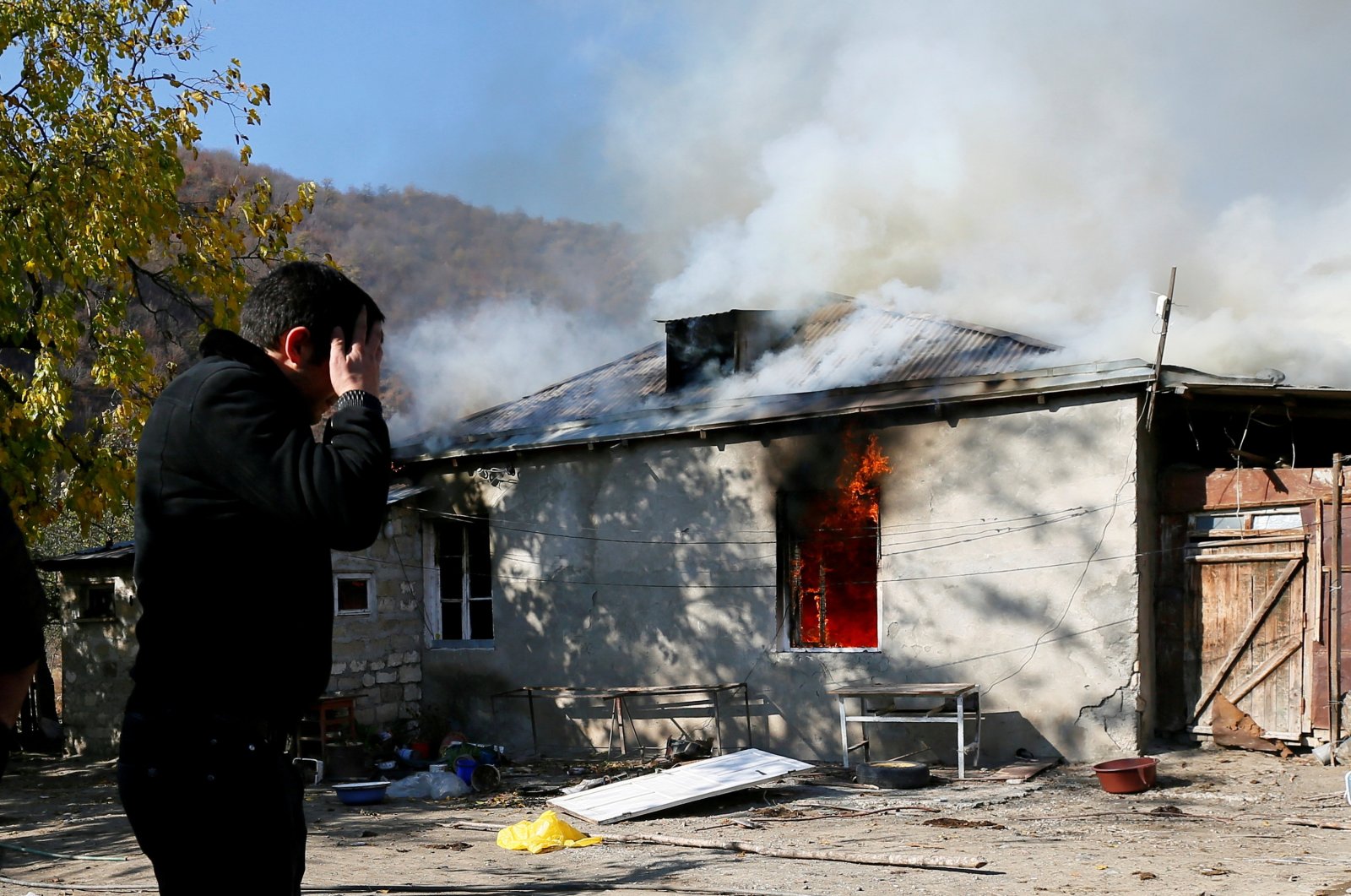 A man reacts as he stands near a house set on fire by departing ethnic Armenians, in an area that had held under their military control but is soon to be turned over to Azerbaijan, in the village of Cherektar in the region of Nagorno-Karabakh, Nov. 14, 2020. (REUTERS)

The first meeting of Russia, Azerbaijan and Armenia’s newly established trilateral group on Nagorno-Karabakh has taken place on Saturday in Moscow.

The meeting was co-chaired by deputy prime ministers of the three countries, according to a statement by the Russian government.

“The parties agreed to establish the expert subgroups related to railway, automobile and intermodal transport; transportation, including security, border, sanitary, veterinary, phytosanitary, and other types of control,” the statement noted.

The expert groups will be established by Feb. 2 and they will hold their first meetings by Feb. 5.

The trilateral working group was scheduled to convene its next meeting in Moscow, with the date to be set by the co-chairs in due course.

On Jan.12, the leaders of Russia, Azerbaijan and Armenia on Monday signed a pact to develop economic ties and infrastructure to benefit the entire Caucasus region.

Nagorno-Karabakh is internationally recognized as part of Azerbaijan but had been under the occupation of ethnic Armenian separatists for nearly three decades.

After six weeks of fighting last year, Azerbaijan and Armenia signed a Russia-brokered cease-fire for the region.

Under the agreement, Armenia must provide Azerbaijan with a safe transport link through its territory to the exclave of Nakhchivan, which borders Turkey.

Russian peacekeepers were also deployed to the region under the deal.

Meanwhile, on Saturday the Azerbaijani Defense Ministry announced that the joint Turkish-Russian observation center, established to monitor the cease-fire following the conflict in Nagorno-Karabakh, has come into operation.

The center, which both countries agreed to set up in November, officially opened in the Agdam region of Azerbaijan. Both Turkey and Russia will send up to 60 personnel each to run the center, the ministry said in a statement.

Turkey said on Friday that one Turkish general and 38 personnel will work at the center.

The Russian Defense Ministry, quoted by Interfax, said that “monitoring will be carried out through the use of unmanned aerial vehicles as well as the evaluation of data received from other sources.”

This article originally appeared in DAILY SABAH on 31 Jan 2021.