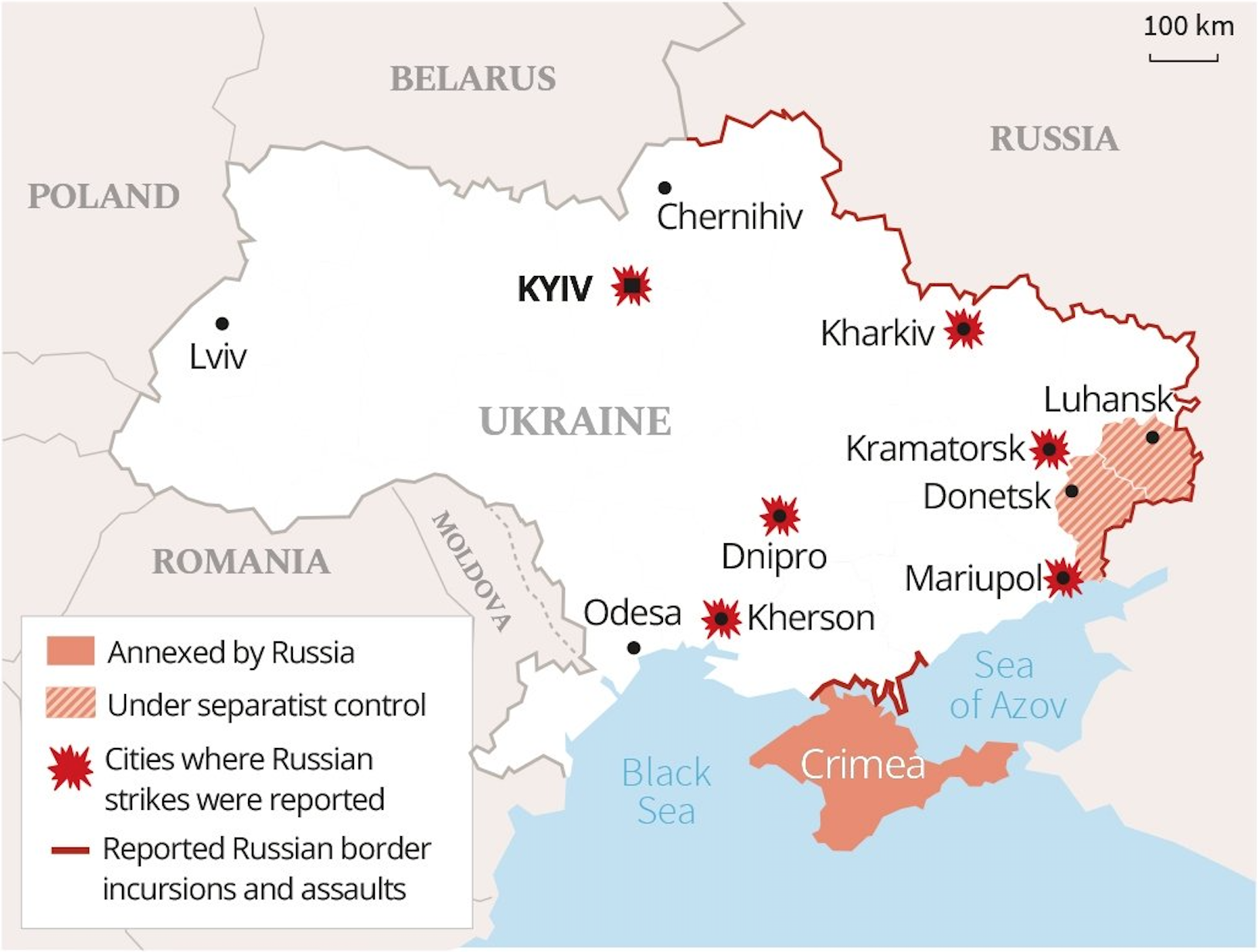 The Russian military launched the much-anticipated invasion of Ukraine on Thursday, as President Vladimir Putin ignored international condemnation and sanctions and threatened other countries that any attempt to interfere would lead to “consequences you have never seen.”

Big explosions were heard before dawn in Kyiv, Kharkiv, and Odesa as world leaders decried the start of a Russian invasion that could cause massive casualties and topple Ukraine’s democratically elected government. Russian military columns crossed the border into Ukraine toward Chernihiv, Kharkiv, and Luhansk regions, Ukrainian border guard service said in what appears to be an assault along the entire border with Russia.

Ukrainian President Volodymyr Zelenskyy introduced martial law, saying Russia has targeted Ukraine’s military infrastructure and explosions are heard across the country. Zelenskyy said he had just spoken to President Joe Biden and the United States was rallying international support for Ukraine. He urged Ukrainians to stay home and not to panic.

Biden pledged new sanctions meant to punish Russia for an act of aggression that the international community had for weeks anticipated but could not prevent through diplomacy.

Putin justified it all in a televised address, asserting the attack was needed to protect civilians in eastern Ukraine – a false claim the U.S. had predicted he would make as a pretext for an invasion. He accused the U.S. and its allies of ignoring Russia’s demand to prevent Ukraine from joining NATO and offer Moscow security guarantees and claimed that Russia doesn’t intend to occupy Ukraine but will move to “demilitarize” it and bring those who committed crimes to justice.

Biden in a written statement condemned the “unprovoked and unjustified attack” on Ukraine and promised the U.S. and its allies “will hold Russia accountable.” Biden said he planned to speak to Americans on Thursday after a meeting of the Group of Seven leaders. More sanctions against Russia were expected to be announced Thursday.

Ukraine’s Foreign Minister Dmytro Kuleba described the action as a “full-scale invasion of Ukraine” and a “war of aggression,” adding, “Ukraine will defend itself and will win. The world can and must stop Putin. The time to act is now.”

Anton Gerashchenko, an adviser to Ukraine’s interior minister, said on Facebook that the Russian military has launched missile strikes on Ukrainian military command facilities, airbases and military depots in Kyiv, Kharkiv, and Dnipro.

After the initial explosions in Kyiv, people could be heard shouting in the streets. But then a sense of normality returned, with cars circulating and people walking in the streets as a pre-dawn commute appeared to be starting in relative calm.

Beyond casualties that could overwhelm Ukraine’s government, the consequences of the conflict and resulting sanctions levied on Russia could reverberate throughout the world, affecting energy supplies in Europe, jolting global financial markets, and threatening the post-Cold War balance on the continent.

Anticipating international condemnation and countermeasures, Putin issued a stark warning to other countries not to meddle, saying, “whoever tries to impede us, let alone create threats for our country and its people, must know that the Russian response will be immediate and lead to consequences you have never seen in history.”

In a stark reminder of Russia’s nuclear power, Putin warned that “no one should have any doubts that a direct attack on our country will lead to the destruction and horrible consequences for any potential aggressor.” He emphasized that Russia is “one of the most potent nuclear powers and also has a certain edge in a range of state-of-the-art weapons.”

Though the U.S. on Tuesday announced the repositioning of forces around the Baltics, Biden has said he will not send in troops to fight Russia.

Putin announced the military operation after the Kremlin said rebels in eastern Ukraine asked Russia for military assistance to help fend off Ukrainian “aggression,” an announcement that the White House said was a “false flag” operation by Moscow to offer up a pretext for an invasion.

Putin’s announcement came just hours after the Ukrainian president rejected Moscow’s claims that his country poses a threat to Russia and made a passionate, last-minute plea for peace.

“The people of Ukraine and the government of Ukraine want peace,” Zelenskyy said in an emotional overnight address, speaking in Russian in a direct appeal to Russian citizens. “But if we come under attack, if we face an attempt to take away our country, our freedom, our lives and lives of our children, we will defend ourselves. When you attack us, you will see our faces, not our backs,” he warned.

Zelenskyy said he asked to arrange a call with Putin late Wednesday, but the Kremlin did not respond.

In an apparent reference to Putin’s move to authorize the deployment of the Russian military to “maintain peace” in eastern Ukraine, Zelenskyy warned that “this step could mark the start of a big war on the European continent.”

“Any provocation, any spark could trigger a blaze that will destroy everything,” he said.

He challenged the Russian propaganda claims, saying that “you are told that this blaze will bring freedom to the people of Ukraine, but the Ukrainian people are free.”

At an emergency meeting of the U.N. Security Council called by Ukraine because of the imminent threat of a Russian invasion, members still unaware of Putin’s announcement appealed to him to stop an attack. U.N. Secretary-General Antonio Guterres opened the meeting, just before the announcement, telling Putin: “Stop your troops from attacking Ukraine. Give peace a chance. Too many people have already died.”

NATO Secretary-General Jen Stoltenberg issued a statement saying he strongly condemns “Russia’s reckless and unprovoked attack on Ukraine, which puts at risk countless civilian lives. Once again, despite our repeated warnings and tireless efforts to engage in diplomacy, Russia has chosen the path of aggression against a sovereign and independent country.”

Anxiety about an imminent Russian offensive soared after Putin recognized the separatist regions’ independence on Monday, endorsed the deployment of troops to the rebel territories, and received parliamentary approval to use military force outside the country. The West responded with sanctions.

Late Wednesday, Ukrainian lawmakers approved a decree that imposes a nationwide state of emergency for 30 days starting Thursday. The measure allows authorities to declare curfews and other restrictions on movement, block rallies and ban political parties and organizations “in the interests of national security and public order.”

The action reflected increasing concern among Ukrainian authorities after weeks of trying to project calm. The Ukrainian Foreign Ministry advised against travel to Russia and recommended that any Ukrainians who are there leave immediately.

Pentagon press secretary John Kirby said Wednesday the Russian force of more than 150,000 troops arrayed along Ukraine’s borders is in an advanced state of readiness. “They are ready to go right now,” Kirby said.

Early Thursday, the airspace over all of Ukraine was shut down to civilian air traffic, according to a notice to airmen. A commercial flight tracking website showed that an Israeli El Al Boeing 787 flying from Tel Aviv to Toronto turned abruptly out of Ukrainian airspace before detouring over Romania, Hungary, Slovakia, and Poland. The only other aircraft tracked over Ukraine was a U.S. RQ-4B Global Hawk unmanned surveillance plane, which began flying westward early Thursday after Russia put in place flight restrictions over Ukrainian territory.

Another wave of distributed-denial-of-service attacks hit Ukraine’s Parliament and other government and banking websites on Wednesday, and cybersecurity researchers said unidentified attackers had also infected hundreds of computers with destructive malware.

Officials have long said they expect cyberattacks to precede and accompany any Russian military incursion, and analysts said the incidents hew to a nearly two-decade-old Russian playbook of wedding cyber operations with real-world aggression.

Even before Putin’s announcement, dozens of nations imposed sanctions on Russia, further squeezing Russian oligarchs and banks out of international markets.

Germany said Tuesday that it was indefinitely suspending the project after Biden charged that Putin had launched “the beginning of a Russian invasion of Ukraine” by sending troops into the separatist regions. The pipeline is complete but has not yet begun operating.

Even before the Russian military attack on Ukraine began, the threat of war had shredded Ukraine’s economy and raised the specter of massive casualties, energy shortages across Europe, and global economic chaos.

The Russian Foreign Ministry has shrugged off the sanctions, saying that “Russia has proven that, with all the costs of the sanctions, it is able to minimize the damage.”

This report originally appeared in Daily Sabah on 24 February 2022.