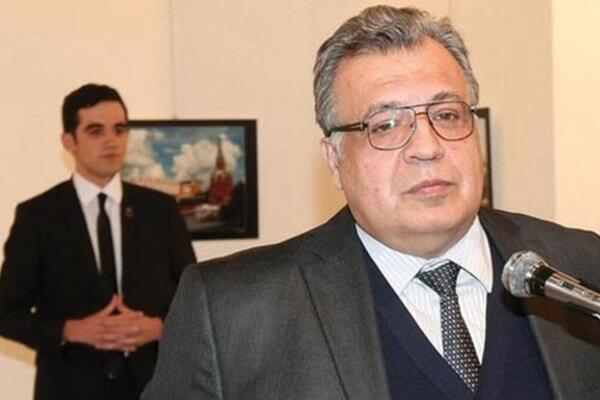 A Turkish court on March 9 sentenced five suspects to life in jail over the 2016 murder of Russian ambassador Andrei Karlov in Ankara and the Russian foreign ministry said it received news of the convictions with “satisfaction”.

Six other suspects were acquitted while seven others were convicted of membership of an armed terrorist group.

The suspects were accused of links to the 22-year-old gunman, Mevlüt Mert Altıntaş, who was killed by Turkish special forces shortly after he assassinated Karlov at a photo exhibition in the Turkish capital.

A Heavy Penalty Court gave two aggravated sentences each to Şahin Söğüt, a senior member of the FETÖ, along with Salih Yılmaz and Ahmet Kılınçarslan, for attempting to destroy the constitutional order and murder Ambassador Andrei Karlov for terroristic purposes, said the sources, who asked not to be named due to restrictions on speaking to the media.

Yılmaz was said to have conveyed the kill order to Altıntaş, an off-duty police officer linked to FETÖ, the group behind the defeated coup attempt of 2016 in Turkey. Altıntaş was shot dead in a standoff after killing Karlov.

The court also gave Hüseyin Kötüce and Vehbi Kürşad Akalain, former intelligence operatives affiliated with FETO, aggravated life sentences for attempting to destroy the constitutional order plus 15 years for assisting in the assassination.

On Dec. 10, 2016, Andrei Karlov was speaking at an art exhibit in Ankara when he was shot dead by Altıntaş.Turkish media reports said the suspects were convicted of aiding and abetting the gunman.
Six others were acquitted while seven were convicted of membership of an armed terrorist group in a trial that started in January 2019.

The Russian foreign ministry said Moscow “continues to believe that a large part of the responsibility for the crime is carried by certain groups that, on the eve of Karlov’s murder, artificially whipped up negative sentiments in the media on social platforms about Russia and Syria.”

FETÖ and its U.S.-based leader Gülen orchestrated the defeated coup of July 15, 2016, which left 251 people killed and nearly 2,200 injured.

Ankara also accuses FETÖ of being behind a long-running campaign to overthrow the state through the infiltration of Turkish institutions, particularly the military, police, and judiciary.

This article originally appeared in Hurriyet Daily News on 09 March 2021.