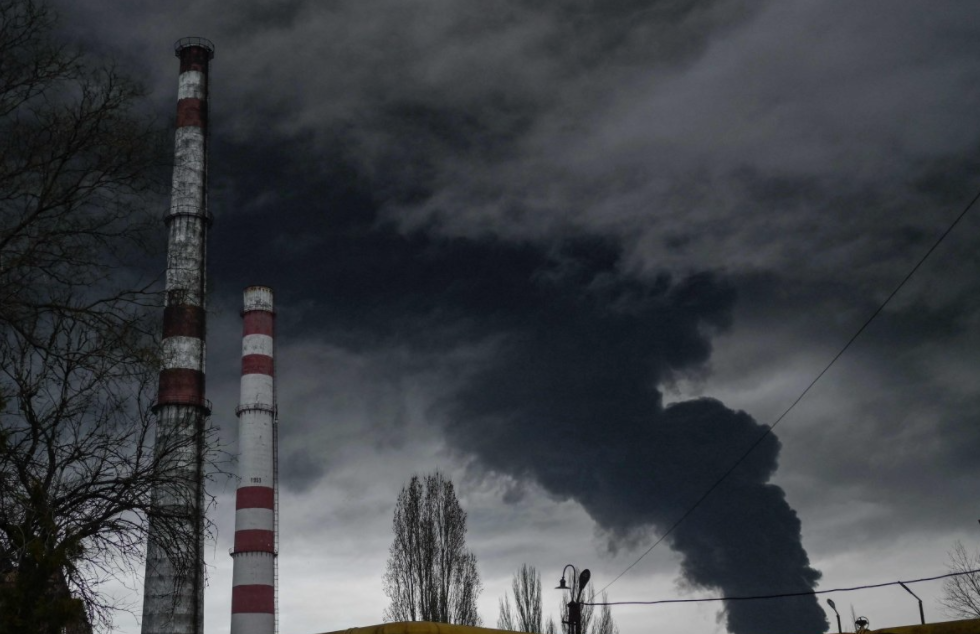 The number of civilians fleeing the war in Ukraine has reached 4.2 million since the Russian invasion began on February 24, meanwhile, authorities have reported finding mass graves in areas recaptured from Russian forces, according to Azerbaijan in Focus, reporting Daily Sabah.

Explosions rocked the strategic Ukrainian port city of Odessa on Sunday as a top United Nations official headed to Moscow to try to secure a “humanitarian cease-fire” and after evidence emerged of possible civilian killings around Kyiv. Meanwhile, the number of refugees fleeing the war has hit nearly 4.2 million since Russia’s invasion began on Feb. 24, with almost 40,000 pouring into neighboring countries in the past 24 hours, U.N. numbers show.

Thick plumes of black smoke rose from several areas on the historic Black Sea port after airstrikes shook the city at about 6 a.m. (3 a.m. GMT) but the Ukrainian army said no one was killed.

The ministry claimed the targets were supplying fuel to Ukrainian troops.

Anton Herashchenko, an adviser to the Ukrainian interior minister, said: “Fires were reported in some areas. Some of the missiles were shot down by air defense.”

U.N. chief Antonio Guterres’ humanitarian envoy Martin Griffiths was meanwhile seeking a halt in the fighting, which Ukraine estimates have left 20,000 people dead, and forced more than 10 million to flee for their lives.

He will fly on to Kyiv from Moscow. Both Russia and Ukraine have agreed to meet him, Guterres said on Saturday.

The United Nations High Commissioner for Refugees (UNHCR) said Sunday that 4,176,401 Ukrainians had fled in just over five weeks, up 38,559 from the figure given a day earlier.

Women and children account for 90% of those who have left Ukraine, with men aged 18 to 60 eligible for military call-up and unable to leave.

The U.N.’s International Organization for Migration (IOM) said that in addition to Ukrainian refugees, nearly 205,500 non-Ukrainians living, studying, or working in the country have also left.

Nearly 6.48 million people were meanwhile estimated to be internally displaced within Ukraine as of mid-March, according to IOM.

That puts the total number of people displaced by the conflict at well over 10 million, or around a quarter of Ukraine’s total population.

In the ravaged city of Bucha, just outside the Ukrainian capital, the bodies of nearly 300 civilians were found in mass graves after Russian troops withdrew.

Agence France-Presse (AFP) reporters saw at least 20 bodies, all in civilian clothing, strewn across a single street. One had his hands tied behind his back with a white cloth, and his Ukrainian passport left open beside his body.

“All these people were shot,” Bucha’s Mayor Anatoly Fedoruk said, adding that 280 other bodies had been buried in mass graves in the town. “These are the consequences of Russian occupation.”

U.K. Foreign Secretary Liz Truss said she was “appalled by atrocities in Bucha and other towns in Ukraine” and promised the perpetrators would be held to account before an international war crimes tribunal.

The International Criminal Court has already opened a probe into possible war crimes committed in Ukraine, and several Western leaders, including U.S. President Joe Biden, have accused Russia’s Vladimir Putin of being a “war criminal.”

Ukraine’s President Volodymyr Zelenskyy has also alleged that Russian soldiers planted mines and other booby traps as they withdraw from northern Ukraine.

In a video address Saturday, he warned returning residents of tripwires and other dangers.

“We are moving forward. Moving carefully and everyone who returns to this area must also be very careful,” he said.

Meanwhile, in an attempt to raise economic pressure on Russia, the Baltic states of Latvia, Estonia, and Lithuania announced Saturday that they had stopped all imports of Russian natural gas.

Pope Francis, on a visit to the Mediterranean island of Malta, issued a thinly veiled attack on Putin for ordering troops into Ukraine, and on Sunday made a plea for refugees fleeing the conflict to be welcomed.

The pontiff has not ruled out a visit to Kyiv.

In talks to end the fighting, Ukrainian negotiator Davyd Arakhamia told local television channels that Russia had “verbally” accepted most of Kyiv’s proposals – except on the issue of Crimea, which Moscow annexed in 2014.

Among the agreed-upon points was that a referendum on Ukraine’s neutral status “will be the only way out of this situation,” Arakhamia said.

He said any meeting between Zelenskyy and Putin would “with a high probability” take place in Turkey, which has sought to mediate the conflict.

As Russian forces withdraw from some northern areas, Moscow appears to be focusing on eastern and southern Ukraine, where it already holds vast swathes of territory.

Defense Intelligence, an organization within the U.K. intelligence community that focuses on military intelligence, said early Sunday that Russian air activity in the last week had been concentrating on southeastern Ukraine, “likely as a result of Russia focusing its military operations in this area.”

But it said Russia was struggling to find and destroy air systems, which has “significantly affected their ability to support the advancement of their ground forces.”

In his latest video message, Zelenskyy said Russian troops wanted to seize the disputed Donbass region and the south of Ukraine, promising “to defend our freedom, our land, and our people.”

But Ukrainian presidential adviser Mykhaylo Podolyak warned on social media that “without heavy weapons, we won’t be able to drive (Russia) out.”

Ukraine authorities nevertheless offered citizens elements of good news Saturday in claiming progress against the Russians, more than five weeks after the start of Europe’s worst conflict in decades.

“Irpin, Bucha, Gostomel (Hostomel), and the whole Kyiv region were liberated from the invader,” Deputy Defense Minister Ganna Maliar said on Facebook, referring to towns that have been heavily damaged or destroyed by fighting.