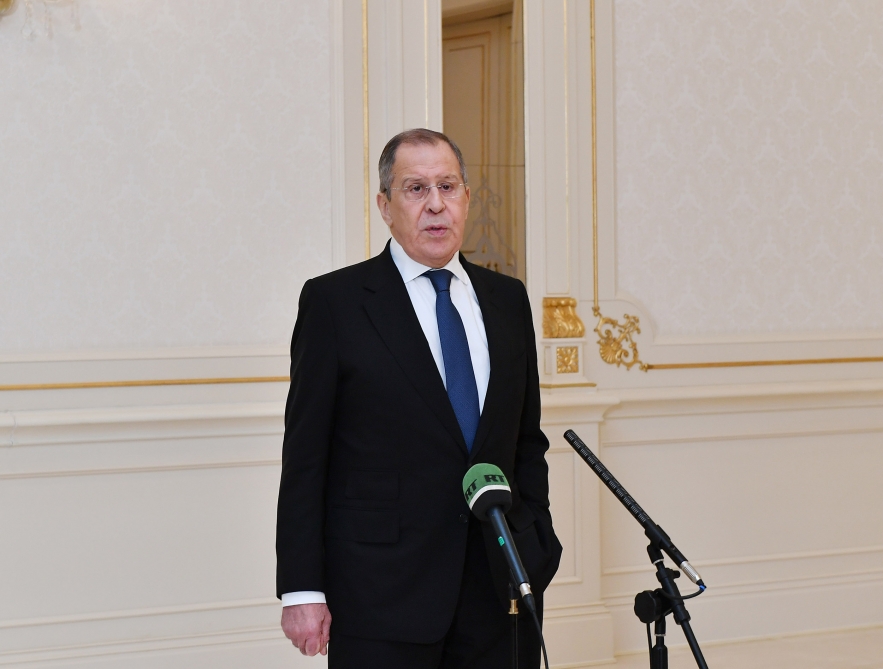 Following a meeting with Azerbaijani President Ilham Aliyev in Baku, Sergey Lavrov, Russian Foreign Minister, responded to questions from the media on the future of the South Caucasus following the trilateral ceasefire agreement on 9 November signed by the Azerbaijani and Russian Presidents and Armenian Prime Minister.

According to ‘Azerbaijan in Focus’ reporting AzerTac, a correspondent from leading Russian newspaper Kommersant reporter stated that Russian intelligence had previously warned that the US and its NATO allies are trying to undermine the 9 November agreement and squeeze Russia out of the Caucasus. He went on to ask if the issue had been discussed with Official Baku and Yerevan and if the issue was raised with the OSCE Minsk Group Co-Chairs in Moscow.

Sergey Lavrov commented that: “During today’s talks here in Baku, the President of Azerbaijan noted that not everyone was impressed with the agreement reached on 9 November. We also note, as you have just mentioned, that there have been attempts to question this agreement, but these will be unsuccessful. Firstly, the OSCE Minsk Group Co-chairs of Russia, France and the US have repeatedly emphasised the need to resolve the Nagorno-Karabakh problem on the basis of the very principles that are now being realised in the wake of the development and implementation of the trilateral joint statement of 9 November.

“Secondly, we always emphasise that, as was the case during the visit to Moscow by the OSCE Minsk Group Co-chairs, it is initially necessary to stop people dying in bloody wars, so that peaceful life can be re-established and that religions, cultures and ethnicities may coexist and live together in peace and security. If this is the objective, I do not see the slightest justification for any negative interpretation of the agreement of 9 November. If geopolitical ambitions were prioritised, nothing would be achieved. However, we will firmly reject such attempts and concentrate on the implementation of the agreements that meet the fundamental interests of the peoples living in this region.”

Mr Lavrov went on to comment on the unblocking of economic and transportation links and the expansion of regional economic co-operation. He explained: “I think this is one of the key provisions. The Azerbaijani President is sincerely committed to realising the opportunities in connection with the unblocking of transportation, economic and infrastructural communications and projects as soon as possible. Vital trade routes intersect in this region, including North–South and East–West, and also involve the neighbouring countries of Turkey and Iran. In fact, when all the restrictions that have existed for almost 30 years are removed, the prospects seem very impressive.

“The unblocking of all these ties will enable the regional economy to breathe deeply will probably quickly improve the living conditions of the people, who will now be free from any restrictions. This will also be the most important material prerequisite before the establishment of interreligious and interethnic peace. So this is one of the key areas for our work in the very near future.”

Mr Lavrov also gave his perspective on the current and future role of Turkey: “The Republic of Turkey is a real factor in this region. In fact, not only in this region, but also beyond, and Turkey is our partner in many areas. Of course, sovereign Azerbaijan has the right to choose its foreign policy partners, just like sovereign Armenia chooses its foreign policy partners. Therefore, perhaps, the art of politics is to fully take into account all the factors that really affect the situation in a particular region when promoting any initiatives. The success of the negotiations, which were protracted and difficult and took place on the initiative of President Putin, together with the President of Azerbaijan and the Prime Minister of Armenia, were largely due to the realistic assessments by all participants in the negotiations process.

“We have an agreement with the Turkish side – supported by Azerbaijan – to establish a Russian–Turkish Joint Monitoring Centre on Azerbaijani territory. It will remotely monitor the implementation of the ceasefire in and around Nagorno-Karabakh using technical means. This additional factor will make it possible to ensure the stability of the ceasefire, in which Russian peacekeepers are playing a key role.” 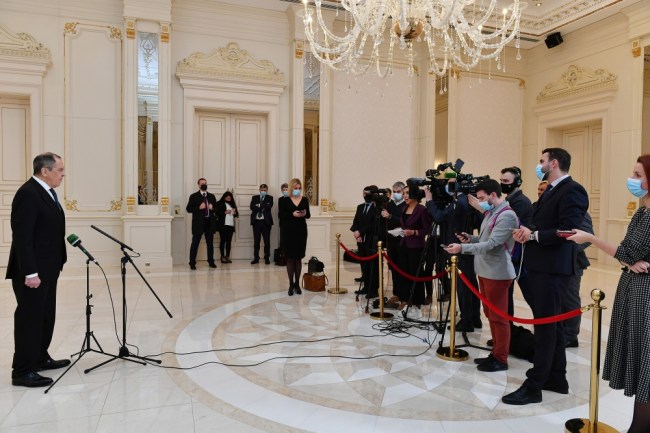