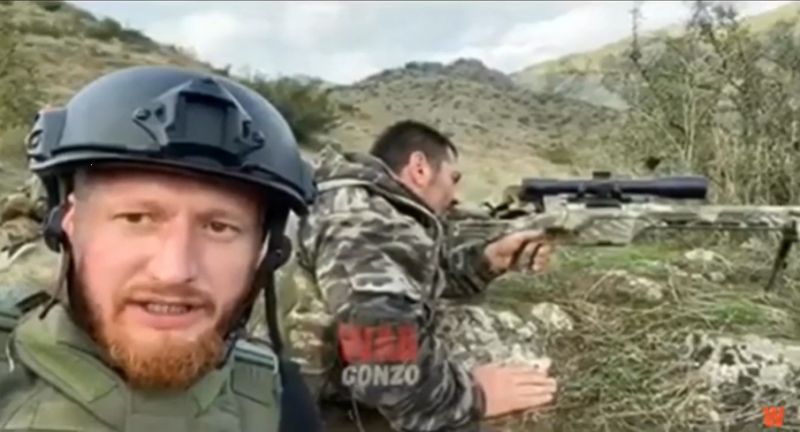 Semyon Pegov, Russian journalist and founder of the WarGonzo project, interviews a Russian mercenary in Karabakh. 10/10/2020

Russian mercenaries from a private military company (PMC) have been recruited by Armenia for the war in Azerbaijan, according to a source speaking to the Turan news agency.

In particular, around 300 members of the Wagner PMC were transferred from Russia to Armenia, thereafter travelling to fight in Shusha. On October 1, Radio Liberty reported that the Wagnerites were already in Karabakh and participating in battles. In particular, these are the operators of anti-tank guided missiles (ATGM). Radio Liberty went on to report that the first PMC Wagner combatants arrived in Nagorno-Karabakh in late August/early September.

As yet, there is no independent confirmation of this information, but the Russian journalists who previously accompanied the Wagnerites in Syria are active in Karabakh.

On September 26, the final day of the Kavkaz-2020 Russian military exercises, held in Armenia, the An-124-100 military transport of the Russian Defence Ministry landed in Yerevan. Experts believe this could deliver the Tor M-2 and Pantsir-S2 air defence systems to Armenia.

This plane flew to Armenia from Rostov-on-Don, 300km from the PMC Wagner base in Molkino.

In addition, Turkish President Erdogan reported to Russian President Putin about the terrorist mercenaries in Shusha on October 27.  Erdogan told Putin: “According to our intelligence services, 2000 PKK terrorists are in Shusha and are fighting on Armenian side. They are paid $600 each.”