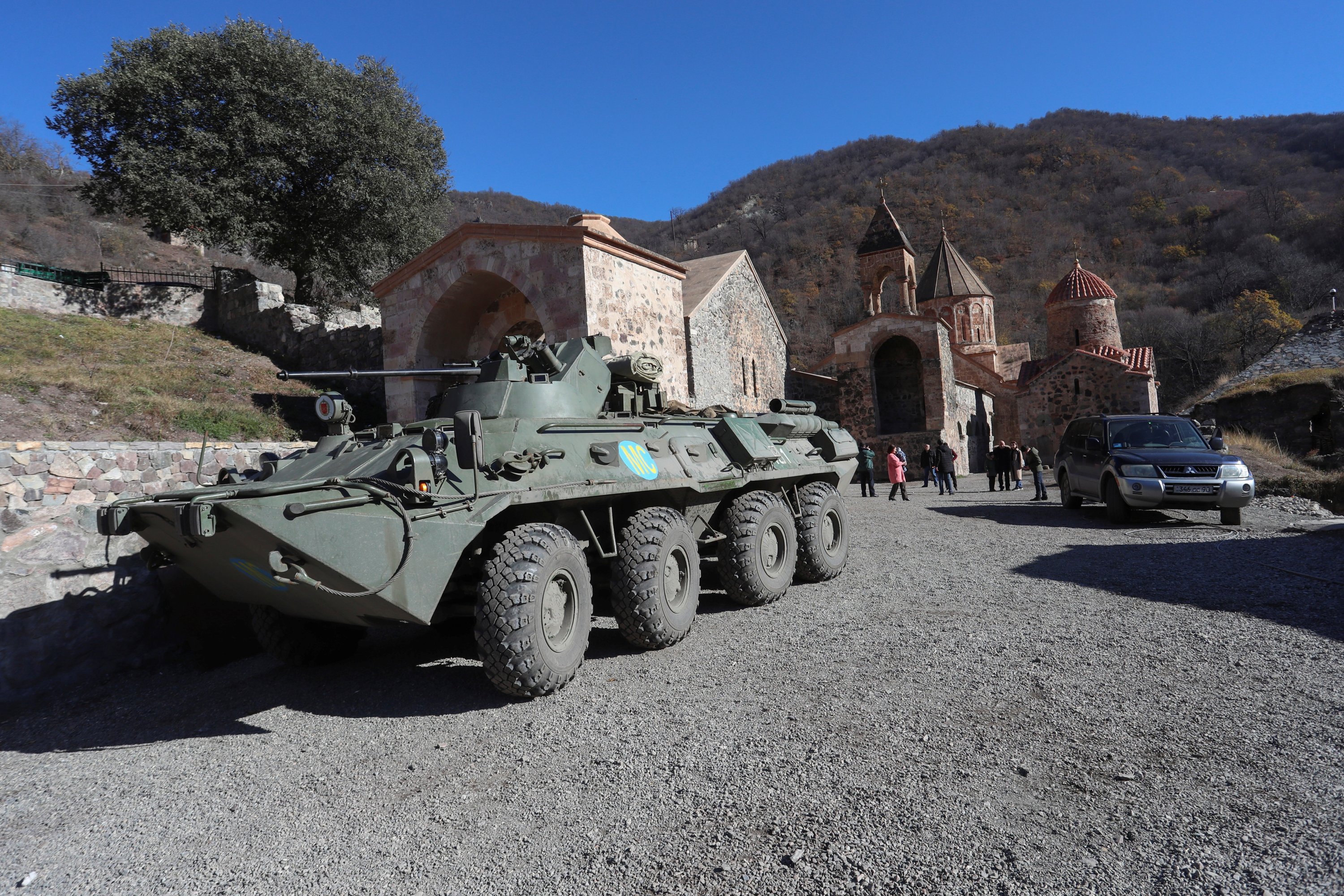 A view shows an armored personnel carrier of the Russian peacekeeping forces near Dadivank Monastery in the region of Nagorno-Karabakh, Nov. 24, 2020. (Hayk Baghdasaryan/Photolure via Reuters)

Armenia’s Defense Ministry said Sunday that Russian peacekeepers will secure the Syunik province, which is on the border with Azerbaijan.

According to a statement, a 21-kilometer area in the region, which has been a “problematic area,” will be secured by Russian forces.

Russia previously announced its first deployment of peacekeepers to the Nagorno-Karabakh region.

The peacekeepers were stationed both in Upper Karabakh and the adjacent Lachin corridor to monitor the implementation of a newly declared cease-fire, said the chief of the Main Operational Directorate of the Russian General Staff, Sergei Rudskoy.

Rudskoy said 27 sorties had been made over the past 24 hours, delivering 414 military personnel, as well as 54 automobile units and equipment, eight helicopters and multiple unmanned aerial vehicles to Armenia.

Russian peacekeeping forces are now in control of the Lachin corridor and the Lysogorsky sovkhoz (state farm) section of the Lachin road, he added.

Noting that Russian troops had marched 300 kilometers (186 miles) and were fully deployed in settlements near the town of Goris in southeastern Armenia after unloading at the Erebuni Airfield in the capital Yerevan.

Russia also plans to set up 16 observation posts in the region.

Almost all Russian military personnel in the peacekeeping mission have previous experience in humanitarian operations in Syria, said Rudskoy, adding that a combat command group would monitor the situation around the clock.

“To carry out peacekeeping tasks, prevent possible incidents and ensure the safety of Russian military personnel, continuous interaction with the general staffs of the armed forces of Azerbaijan and Armenia has been organized.”

Russian President Vladimir Putin announced earlier that Azerbaijan and Armenia had signed a deal to end the conflict in Upper Karabakh.

Relations between the two former Soviet republics over Upper Karabakh have remained tense since 1991, but fresh clashes broke out on Sept. 27.

Since then, Armenia has repeatedly attacked Azerbaijani civilians and forces, even violating three humanitarian cease-fire agreements.

In total, about 20% of Azerbaijan’s territory has been under illegal Armenian occupation for nearly three decades.

Meanwhile, Thousands of Armenians marched through the capital Yerevan on Saturday to commemorate the soldiers killed in a six-week conflict over the Nagorno-Karabakh region in which Azerbaijan made significant territorial gains.

The conflict and the fatalities on the Armenian side have increased pressure on Prime Minister Nikol Pashinian, whom the opposition accuses of mishandling the conflict by accepting a Russian-brokered cease-fire last month, to resign.

Pashinian led the march, held on the first of three days of mourning, driving up to the Yerablur military cemetery to light incense on the graves of fallen soldiers along with other senior officials.

Although his supporters filled the cemetery to its brink, footage published on Armenian television showed Pashinian’s critics shouting “Nikol is a traitor!” as his convoy passed by, escorted by heavy security.

Armenia’s opposition has called on its supporters to join a national strike on Dec. 22, at the end of the three-day mourning period, to pressure Pashinian to resign over the losses incurred in the conflict over Nagorno-Karabakh.

Pashinian, who swept to power in a peaceful revolution in May 2018, has rejected calls to resign.

Ethnic Armenian authorities in Nagorno-Karabakh accused Azeri forces on Wednesday of capturing several dozen of their troops, putting further strain on a cease-fire deal that brought an end to the fighting last month.

The two sides have nonetheless begun exchanging groups of prisoners of war as part of an “all for all” swap mediated by Russia.

Moscow has deployed peacekeepers to police the cease-fire, but skirmishes have nonetheless been reported.

This article originally appeared in DAILY SABAH on 20 Dec 2020.