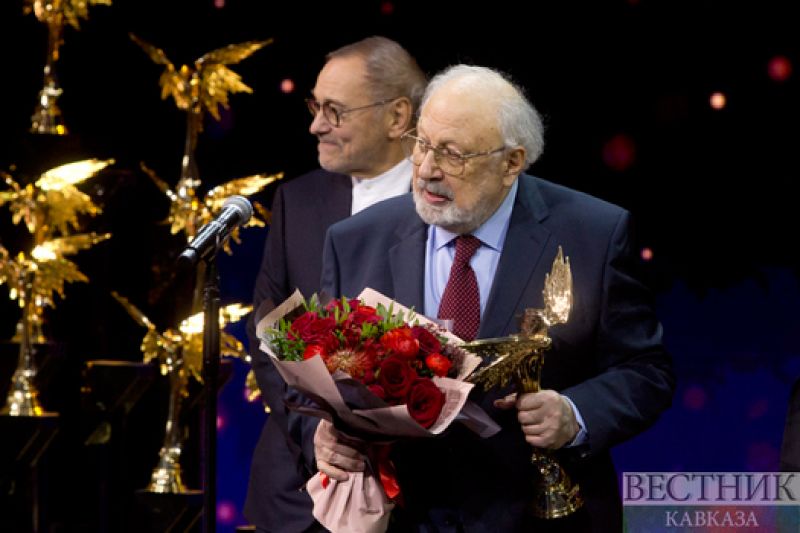 Honored Art Worker of the Azerbaijan SSR and Russia, Chairman of the Confederation of the Unions of Cinematographers of the CIS and Baltic States, writer, screenwriter, and film director Rustam Ibragimbekov was awarded the 2020 Russian national Nika Cinematic Award, in a special category named after Eldar Ryazanov “Honor and Dignity”.

According to Azerbaijan in Focus, reporting Turan News, the award was presented by film director Andrei Konchalovsky.

The award ceremony was held at Moscow’s Crocus City Hall.

This year, the award is being presented for 2019 and 2020, as the award ceremony was canceled last year due to the pandemic.

Rustam Ibragimbekov began his speech with recollections of his childhood. “When I was five years old, a neighbor, who was about the same age as I am now, was left with children in our Baku yard by parents, leaving for work (this was 1944, men were mainly at war), – he would call us from time to time and strictly say: “Children! You must live in such a way that decent people come to your funeral,” he said.

“I must say that all my life I have been trying to fulfill the will of the main mentor of our Baku yard. Apparently, I am able to do it. I am glad that my colleagues, very discerning people, found it possible to approve my life behavior, which I myself sometimes find dubious, and awarded me such a special award for me. Thank you very much! I am touched. Thank you all! “, concluded the renowned director.

While presenting the award, Andrei Konchalovsky, said that he wants to use the opportunity to thank Rustam Ibragimbekov. “50 years ago … no, a little more, we planned a script for a film – you, Valya Yezhov and I – about the Basmachs. And left to write, remember? I got carried away by something else and said, : Guys, write yourself” and left for Moscow for the festival. And thank God that I left, because, without me, you wrote the masterpiece “The White Sun of the Desert”. Thank you very much,” he said.

Nika Cinematic Award was established in 1988 at the initiative of director Yuliy Gusman and has been awarded annually since then.

Music Festival Is Reviving in Shusha

Restoration of a war-damaged church in Shusha

Biden Must Press Armenia to Hand Over Minefield Maps